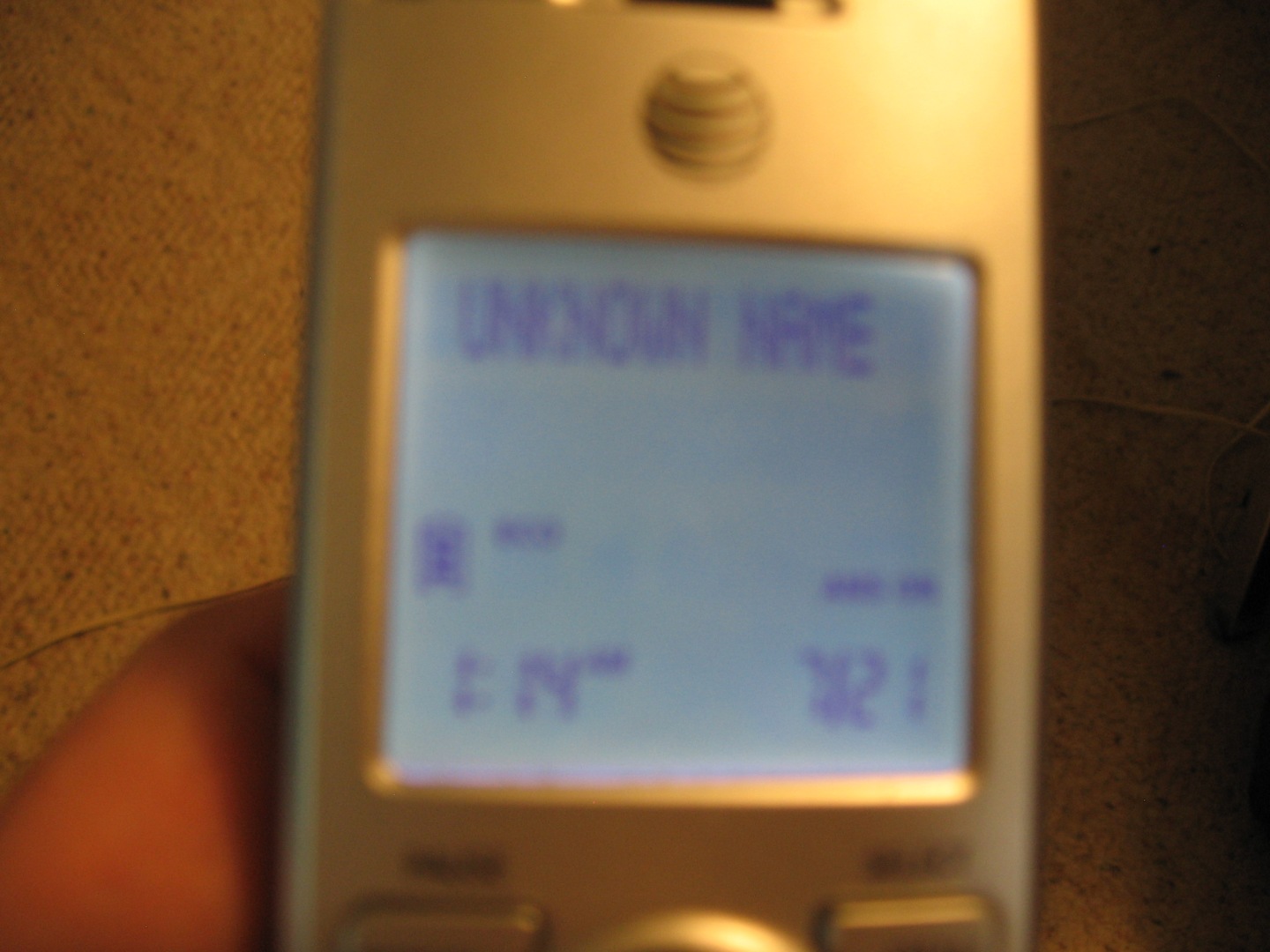 If the Caller ID programmers could just change "Unknown Name" to "SATAN" life would be much simpler.

The Lord is my shepherd, I lack nothing.

He makes me lie down in green pastures,
he leads me beside quiet waters, he refreshes my soul.

“I’ll give you the consequences of the burden; you guess the cause.

“Any idea what’s being described?

”Chemical abuse?  Divorce?  Long sermons?  None of those answers are correct, though the last one was a good hunch.  The answer may surprise you.  Insomnia.  America can’t get to sleep.”

The Lucado quote introduces the chapter on ‘lying down in green pastures.’  (His book, Traveling Light, dissects Psalm 23, one phrase at a time in typical Lucado fashion.)  We need rest.  Lucado said that he scoffed people with this insomnia problem until he had a bout of it himself.  In his case, his brain was turned on and everything that he did, turned on more of his brain.  There are other mechanisms, but that one is the one I suffer from.  While he had it once or twice late in life, I have lived with the brain that cannot turn off my entire life until late in life.

I can get to sleep pretty good these days – nowhere near perfect, but with a devotion before bed and some prayer, I can get to sleep within an hour.  I really think this happens due to retirement.  The days that I have the most trouble falling asleep are when I set the alarm for a doctor visit or church.  This means that if I do not get to sleep within the hour, I may not get enough sleep.  This thought is only in my subconscious – that is until midnight when I realize, in a panic, that I will not get enough sleep.

Once I am asleep, I can usually stay asleep.  If I wake in the night, I can go to the bathroom in the dark – absolutely no lights on, return to bed, and almost immediately go back to sleep.  BUT, if I say something, even a single word, or do something beyond the basics of hygiene – especially turn on a light, I am up for the rest of the night, regardless of how much sleep I had gotten at that point.

Now that brings us to last Saturday night.  I went to bed with the alarm set for 6:30am.  I went to bed by 10:00pm and fell asleep very quickly.  We got a call on the landline at 1:15am, after roughly 3 hours of sleep.  I picked up the phone and said “Hello.”  I did not even hear the person hang up.  There was no one on the line.  Even though I have had cataract surgery, when I wake, my eyes are blurry for some time.  I turned on the light in the bathroom and I could not focus on the screen.  I walked downstairs and turned on the living room light.  By then, my eyes could focus.  The call, according to caller ID, had come from “Unknown Name.”

I mentioned the ground rules regarding waking in the middle of the night.  I had now not done just one thing, but several things.  I hand picked up the phone, said “Hello,” turned on lights, turned off lights, descended stairs, turned on more lights, read something after pushing a series of buttons (twice).  I was three-hours-of-sleep Toast!

I added one more thing to do to the list, I prayed that God would grant me a one-time (at least) easement on the ground rules.  “Please, Lord, let me get a little more sleep!”

I got more sleep, but in small fits and spits.  I kept hearing noises downstairs.  I heard bumps and thumps and an occasional crash.  At 3:00am, I figured that if the intruder killed me, I would at least get some rest.  I again walked downstairs to find nothing out of place.  Nothing!  I returned to bed and finally got a little more sleep.  But…

At 6:30am, the alarm woke me.  I figured that I was awake enough to not fall asleep while driving the ten miles to church.  I would fall asleep during the sermon, but I would be there.  I started to get ready for church.  I then gently called for my wife to awake at seven.  That’s when she told me that some horrible person, who she was too nice to point out, had jumped out of bed and ran around inside the house at 3:00am and woke her up.  As a result, she had just gotten back to sleep at about 6:00am.  “Please, let me sleep!”  Hmmm, the entire phone call thing and trying to read the caller ID with the lights on had not disturbed her at all, but two hours later when I was trying to be as quiet as a church mouse…

I quietly closed the door, removed my dress shirt, exchanged my nice slacks for some sweats, and turned on the Open Championship (British Open in golf).  I figured that would definitely send me back to sleep.  It did not.

But I determined something while watching the best golfers in the world screw up their scores on a difficult course in the wind and rain.  I know who “Unknown Name” is!  It is Satan!

I doubt if the people that program caller ID for phones would do this, but I think that “Unknown Name” should be changed to “Satan.”  Less people would answer the phone, and I have never found someone with that caller ID that I wanted to talk to.

My wife and I had discussed the idea on Saturday night of possibly not going to church.  It was going to be “hot-as-a-furnace” hot outside.  We had gotten a little rest after our trip, but we were both still tired, but I told her that we would go, regardless of how hot it was or how tired we were.  We might be the most tired worshippers in the sanctuary, but we should go.  As I told my wife, “We are not contagious.”  Then, Satan did his best, and we failed our intentions to worship God as a result.

At least, that is my story, and I am sticking to it.