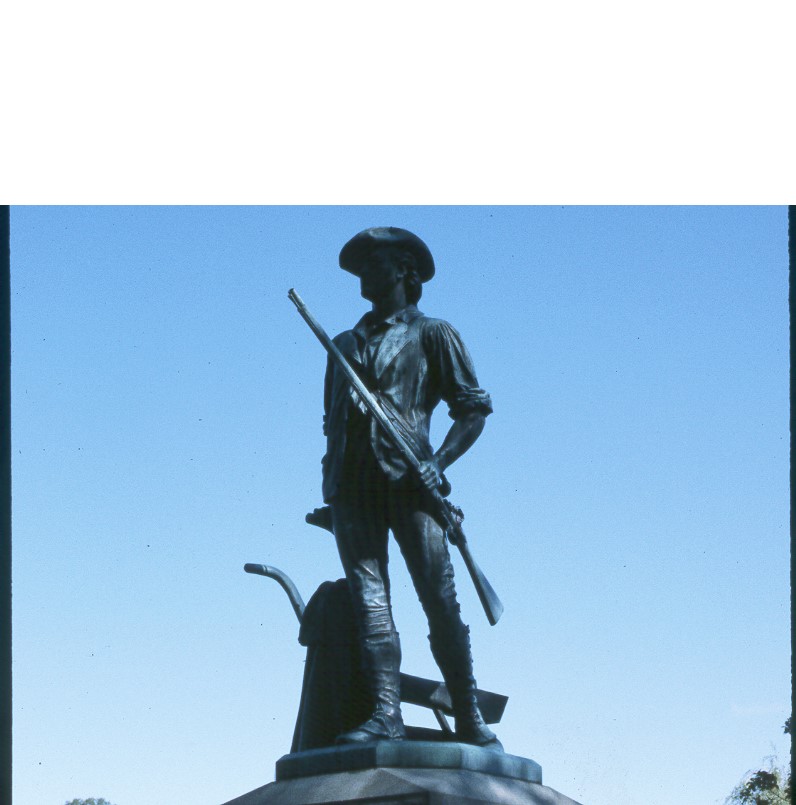 The monument to the Minutemen in Concord, MA. A statue of an ordinary man on a pedestal.

So watch yourselves.
“If your brother or sister sins against you, rebuke them; and if they repent, forgive them.  Even if they sin against you seven times in a day and seven times come back to you saying ‘I repent,’ you must forgive them.”
The apostles said to the Lord, “Increase our faith!”
He replied, “If you have faith as small as a mustard seed, you can say to this mulberry tree, ‘Be uprooted and planted in the sea,’ and it will obey you.

Barnabas they called Zeus, and Paul they called Hermes because he was the chief speaker.  The priest of Zeus, whose temple was just outside the city, brought bulls and wreaths to the city gates because he and the crowd wanted to offer sacrifices to them.
But when the apostles Barnabas and Paul heard of this, they tore their clothes and rushed out into the crowd, shouting: “Friends, why are you doing this? We too are only human, like you. We are bringing you good news, telling you to turn from these worthless things to the living God, who made the heavens and the earth and the sea and everything in them.  In the past, he let all nations go their own way.  Yet he has not left himself without testimony: He has shown kindness by giving you rain from heaven and crops in their seasons; he provides you with plenty of food and fills your hearts with joy.”  Even with these words, they had difficulty keeping the crowd from sacrificing to them.

“The apostles spoke these words [Increase our faith].  I have sometimes thought that Paul’s speech to Lystra, when he prohibited the multitude to worship him and told the people he was a man of like passions with themselves, needs to be repeated in the ears of many modern Christians.  We in the Christian church tend to set up the apostles and other eminent saints on a platform high above the level of ordinary humanity.  I do not say to worship them but rather to hold them in extraordinary esteem.  Jesus would have us know that the chosen Twelve, who went out from him, were men of like passions as ourselves.  We are not to look on them as though they were unapproachable heroes, a sort of divine character, or as though they were free from our infirmities and out troubles.  They were as we are, and if they excelled us, it was by divine strength alone, the strength we also may receive by grace.  If they were here, they would still have to struggle with unbelief and, conscious of their unbelief, would say again, ‘Lord, increase our faith.’

”The apostles said it, and the apostles said it to Jesus.  They went to the strong for strength.  It is idle to go elsewhere.  In vain would they have said it to one another; in vain would they have searched the whole world to find some eminent saint to whom to address the petition.  The apostles went to Christ, the lawgiver, the author and finisher of their faith and, lifting up their hearts to him in the prayer, ‘Lord, increase our faith,’ they, before long, gained a comfortable answer and became strong in faith, giving glory to God.”

I wrote the other day about how most people are nice to the pastor, thinking that they will get brownie points for Heaven.  We put pastors on pedestals, and when they fall, they have a further distance before they hit the ground.  Their fall becomes monumental.  David Robertson, the Wee Flea, wrote about how prominent Christians whose fall seems to not even be news anymore.

But, we tend to put a lot of people on pedestals.  We have our sports heroes, celebrity heroes, and political heroes.  (Although these days, are any politicians worthy of hero status?)

Among Christians, we look upon the Twelve, and think that they can do no wrong.  Maybe the more we think about it, we think that they did no wrong after Pentecost, when they received the Holy Spirit.  But for those who have accepted Jesus, we have received the Holy Spirit, yet we still screw up.  The apostles did also.  It’s just not recorded in Scripture.  Okay, Peter did have a problem, arguing with God about the variety of animals that he was invited to eat, but he eventually understood when there was a knock at the door, and he was invited to meet with Cornelius (Acts 10).

But of those in the Christian community, we have a variety of saints that we revere too much.  For those in the Reformed and Protestant faiths, they often recognize Reformation Sunday.  Do they also place Martin Luther on a pedestal?  How many of us thought that Billy Graham was sinless?  He talked and wrote about the wages of sin, but I am sure he had his private moments.  I recently quote Charles Swindoll where he confessed that when stressed he wanted to choke the living daylights out of the one causing the stress because they desperately needed it.  He never acted on it, but just the thought was a wrongdoing.

I recently heard someone that I highly respect misinterpret a bit of Scripture.  It wasn’t a sin, but it seemed so obvious what the Scripture meant that I was crestfallen thinking that this honored fellow Christian could miss the point.

See, you don’t even have to have a divinity degree to be placed on a pedestal.

I think one of our biggest problems is that we know that making an idol out of clay, wood, stone, whatever is bad, but we still seem to have a problem with desiring something solid to hang on to.  As Spurgeon says, not ‘worship’, but ‘to hold in extraordinary esteem.’  That might be the local pastor or even the Sunday school teacher.  Heaven forbid we revere elders or deacons, but sadly, it happens.  We might have a favorite TV preacher, but all these people are humans with the same passions that we have.

Someday, we will see God, and the desire for any human facsimile will vanish.

The key is, have you been seeking to know God in the meantime?