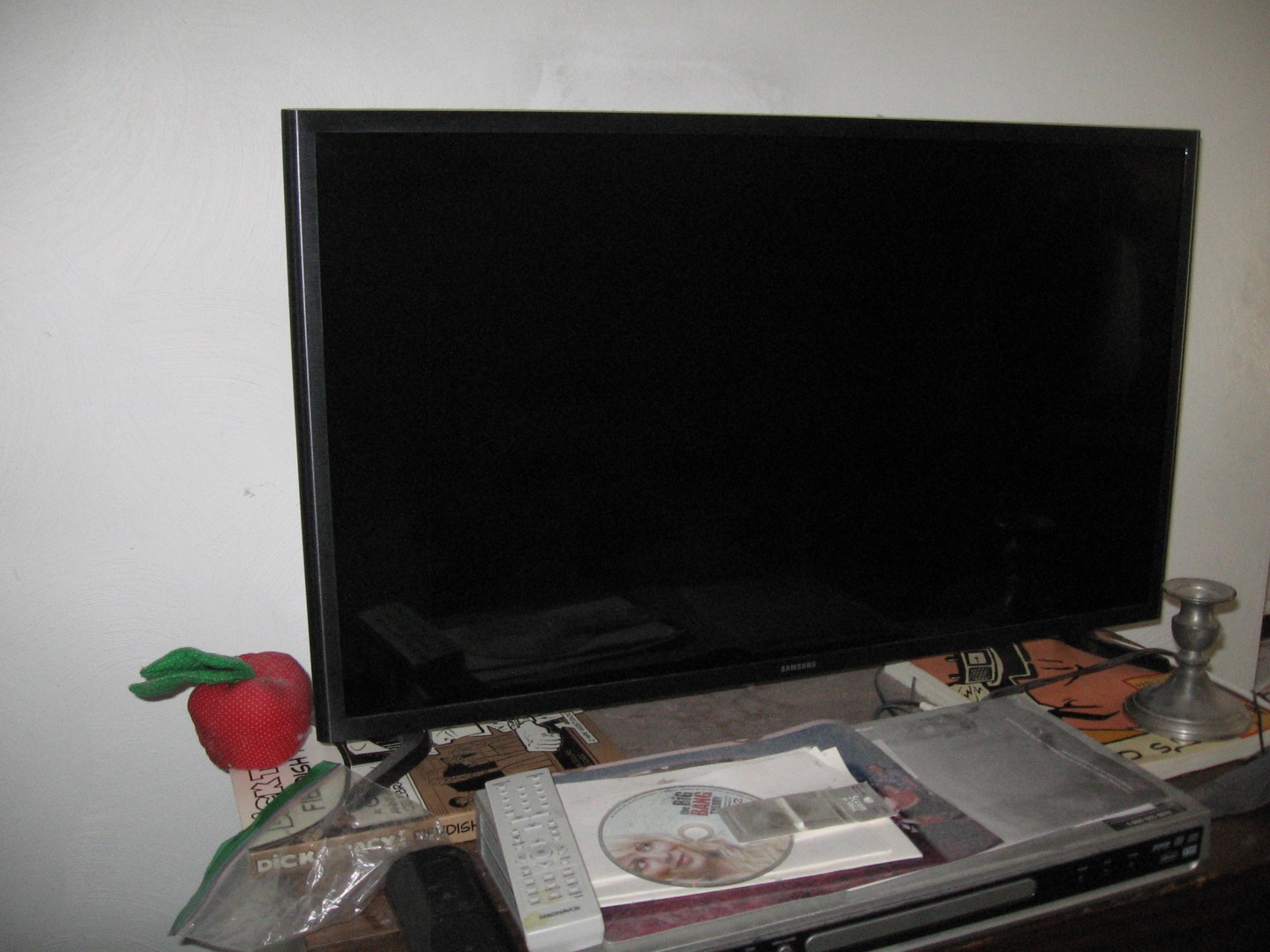 My wife's smart TV that I have only had turned on once since she started her babysitting in Tennessee - turned on to try to find something that wasn't available yet.

Okay, we all see television commercials.  Some sell things (either the product being sold or the situation depicted in the commercial) that God would consider sin, maybe ill-advised at best.  Many promote secular propaganda or they pander to the misconceptions of a certain generation, but I thought I’d look at a few commercials through either my cynical glasses, whimsical glasses, or ‘bent’ glasses (not in the Out of a Silent Planet by C. S. Lewis concept of ‘bent’ – just strange).

A recent facial tissue commercial – They are about to have a school play.  The goofy looking boy with glasses who is playing a tree sneezes.  Then you see a cute little girl wearing a cloud costume.  The costume is made of some kind of frame (chicken wire maybe, or papier mâché) with facial tissues stuffed into every opening of the mesh.  You only see an oval sea of tissues, but she’s probably fully dressed underneath.  The girl smiles as the boy grabs a tissue to wipe his nose.  Adorable right?  Innocent right?  But, the girl does not say “Have one.”  The boy takes without saying thank you.  Yes, if they said something, you’d have to pay them more.  But, the boy is essentially undressing her without her consent.  Hey!  One tissue is a start!  I wonder if I am the only one who has gone down that rabbit hole.  If it wasn’t so cute, I’m sure more people would have complained, and we would not be seeing the commercial anymore.

Next a cat food commercial – A woman has a cat on her shoulder. The cat is purring. A child from the other part of the house yells, saying that they fell. The mother says to get a bandage, trying not to move while the cat continues to purr. The child yells that they are bleeding. The mother says to get two. Is this teaching parents how to parent or are we there already?!?!?!?!

Now for a recent car commercial – Brie Larson, who plays Captain Marvel in the Marvel superhero movies, drives up to the curb as an employee is being told that she’ll have to wait another quarter to get a promotion.  The car driver, Ms. Larson, tells her to drop the taco and get in.  She drives like a maniac showing how the car can handle and asking that if the car does not compromise, why should you?  The young female employee, now empowered, leaves the car to demand the immediate promotion.  That’s good, right?  Woman empowerment?  Equal pay for equal work?  If someone pushes you, you push back?  Ooops, went too far there.  Jesus wouldn’t like that push back.  But I worked the last twenty years of my career with an engineering company.  They got work by keeping their payroll low enough to be competitive.  Three times in my memory, people, who had specific skills that no one else in the company had, asked for a better raise and got it.  In the first two cases, the company immediately cross-trained someone to prevent one person being able to blackmail the company for more money again.  Then upon the next downturn, the blackmailers were the first to be laid off.  Not saying that was the reason; it just happened. Each time I see the commercial, I think that the headstrong young lady is about to be laid off.  Oh, the third person to ask for a pay raise was me.  I had been ‘promoted’ to Training Manager, something that I was promised a raise when it happened, and Safety Director without ever seeing an extra penny in my paycheck.  My new business cards impressed customers, who thought I was something other than the underling that I was.  I complained to my boss, who felt the money came out of his pocket for any pay raises, but I did so in a formal manner so that the company president would know what I suggested (not demanded).  The company president came by my office and said, “The Training Manager job is what you basically are getting paid to do anyway, just a fancier title, but the Safety Director job keeps the company operating legally, provides us entrée into some customer bidding processes, and keeps me out of jail.  You’ll get an extra 1% this year.  If your boss complains, have him see me.”  What I failed to mention was that my wife demanded that I suggest that I needed the raise.  She’s braver than I am.

And now for my favorite gecko commercial, favorite at present – First, let me state that I do not have their insurance.  I got USAA when it was only available to commissioned military officers, immediately after getting my commission.  It has now expanded availability to all military service personnel, active, reserves, or veterans.  As for the entire package – everything you think of when you think insurance – no one else comes close in price, bang for the buck, service, etc.  Since I am an old veteran, I get refunds each year that cover over half the insurance premiums that I pay, not based on that, but the way the math comes out.  (Don’t expect that for a long time.  I get it that way because I’m old and I’ve been with them for over 45 years.)  Now for the gecko.  He’s reading something and the lights go out.  The gecko waves his arms to no avail, but then an old man walks up, waves his arms, the lights come on…  The old man talks about automatic lights and what might be next.  The walls might have eyes.  He then says, dramatically too loud, “Well, Good Night” and walks away.  Little does the old man know (Custodian or night watchman?), the walls already have eyes in most corporate buildings.  It’s nice to trust your employees, but nicer when you have electronic eyes looking over their shoulder or tracking every computer key stroke.  (And yes, the IT manager, a good friend of mine, moved the mouse cursor around on my computer screen to mess with my mind.  When I went to his office, he and his assistant were doubled over laughing.  I think they had a bet on how long it would take me to walk to their office.  The point is, he was watching what I was doing on the computer, and he could actually take over my computer remotely whenever he wanted.  He showed me charts that recorded when each company computer was turned on and when each computer was turned off, proving to the company president which employees only worked six hours out of an eight hour day, and which worked nine hours.  I was shown the chart, because I was one of the nine hour guys and I wouldn’t talk about the slackers by name.)  Don’t get me wrong.  The old man’s fear-laden words cause me to laugh every time I see the commercial, but…  We are already there.  That ship has sailed.  Welcome to Big Brother of 1984, just a few years late.

And I feel bad about the companies who have invested tons of money to create specific advertisements for March Madness (the NCAA men’s and women’s basketball tournaments), but showing the March Madness commercials anyway is torture to all who are lamenting that the tournament has been cancelled due to the virus.

I may write one of these diversions down one of my rabbit holes again, maybe even a few times.  You never know what others think about what propaganda we are fed by Madison Avenue (if they still reside there) unless you complain about it.    I had an acquaintance on a project a few years ago complain about ED medication commercials, something that I had seen but never really noticed.  His view was that when a child asked what ED was, are you ready to have a conversation with your child that you weren’t planning on having for several more years?  That got me to thinking.  There are a lot of products being advertised that raise those kinds of questions.  But, maybe parents aren’t having those discussions with their children, because the children already know more than the parents know.  Everything is accessible, if you know how to access it.

And even in an offbeat rant…