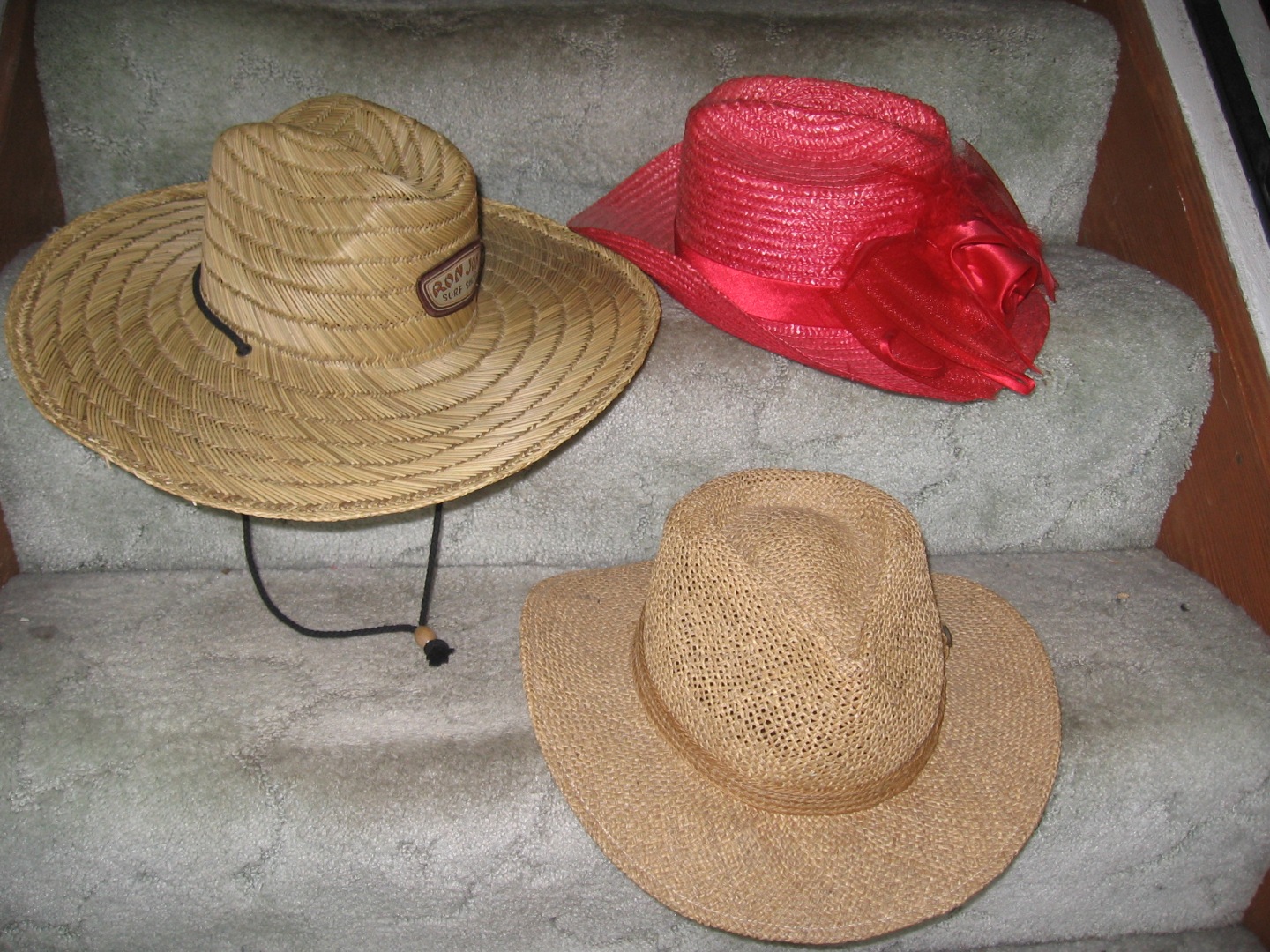 Three straw hats: a wide brimmed hat from Ron Jon's Surf Shop on Cocoa Beach, one of my wife's red hats from when that was a thing, and my hat from Jefferson, Texas

At that time Jesus said, “I praise you, Father, Lord of heaven and earth, because you have hidden these things from the wise and learned, and revealed them to little children.  Yes, Father, for this is what you were pleased to do.

“Come to me, all you who are weary and burdened, and I will give you rest.  Take my yoke upon you and learn from me, for I am gentle and humble in heart, and you will find rest for your souls.  For my yoke is easy and my burden is light.”

“Our natural inclination is to be so precise – trying always to forecast accurately what will happen next – that we look upon uncertainty as a bad thing.  We think we must reach some predetermined goal, but that is not the nature of the spiritual life.  The nature of the spiritual life is that we are certain in our uncertainty.  Consequently, we do not put down roots.  Our common sense says, ‘Well, what if I were in that circumstance!’  We cannot presume to see ourselves in any circumstance in which we have never been.

Later, beyond this quote from Chambers, he talks of faith like a child, using Matthew 18:3 instead of the Scripture above.  He mentioned that when we speak of our uncertainty, we should look at it with wide-eyed excitement, not gloomily with sadness.

Children have wide-eyed excitement.  At times they have no fear at all.  It is us adults who grab them before they walk off cliffs, into traffic, or into the deep end of the pool.  We teach them caution.

Once when I was young, almost nine, I think, my entire family (mother, father, and three children) had gone to visit my mother’s sister in Cocoa, FL.  Instead of spending the vacation fishing on the Indian River or looking for seashells on Cocoa Beach or picking fresh fruit, we were all going south to Miami.  I remember a garden that had a variety of macaws.  I think it was on that trip.  I also remember going to Surfside 6, the actual street address, not the television show.  That probably places the trip in the summer of 1961, since the TV show was a year old at the time.

The morning that we left for Miami was a very busy morning.  Most of my family’s stuff was already in suitcases, but my cousins had to get packed.  Since there were not any fast food places to speak of in those days, my mother and aunt were making sandwiches for a beach picnic along the way.  My aunt had three children, two about my age (about 10 and 9, in the summer of my 9th birthday) and a younger son by a few years.  As little children did, the youngest son kept asking the same question, “Where are we going?”, but my sister, Joyce, who was home from college that summer, was the only one who gave him any answer, “We’re going to Miami.”  He must have asked her ten times.  Each time, she gave the same answer.

Later, with everything packed and all ten people standing in the living room going through the bathroom check (because my Dad and uncle were not stopping), my aunt turned to her youngest son and asked, “Now, do you know where we are going?”  He said, “Yes, we are going to Joyce’s Ami.”

When was the last time that you tugged at everyone’s pants leg and asked, “Where are we going?”  Those words had excitement dripping from each syllable.  You could hardly contain yourself – another reason for the bathroom check.

In this Scripture passage, two things stand out in what Jesus says.  Things will be hidden, and they will be revealed to children – mainly our inner child when we have faith like a child.  I have read that we should not be ‘childish,’ but rather we should have that wide-eyed excitement.  We are talking about the things of God.  As a child, everything was bigger than we were.  It was no problem to believe in a God that was bigger still.  As we get older and we start to explain everything, we keep putting things into boxes.  Sadly, we box away our Lord and Savior.  He is too big for a box, but we are more comfortable with Him in the box.  Uncertainty is far from comfortable.

When I read the Chambers passage above, I thought that he was describing me.  I had a boss once who chastised me for my intricate plans and spreadsheets.  He said, “Why create a plan when the customer, or just circumstances, are going to screw up the plan?  It’s a total waste of time!”  This boss thought he was the greatest project manager of all time, but he never planned anything, ever?  My response was that I had plans for more than ten of the usual contingencies on back-up spreadsheets and I was nimble enough to dance around anything else that the customer could throw at me.  I reminded him that spreadsheets can be modified.  I needed my precise control over every project to manage my limited resources.  He, as my boss, could simply redirect his employees from one project to another when his project got into a bind.  I couldn’t do that.  So, I planned for certainty, or something like it.

Anne Lamott wrote “The opposite of faith is not doubt, but certainty. Certainty is missing the point entirely. Faith includes noticing the mess, the emptiness and discomfort, and letting it be there until some light returns. Faith also means reaching deeply within, for the sense one was born with, the sense, for example, to go for a walk.”

Yes, to grow closer to God and grow our faith in Him, we must find that ‘sense we were born with,’ that child-like wonder.  And never, ever fear when we take that step into certain uncertainty, for His “yoke is easy and [His] burden is light.”