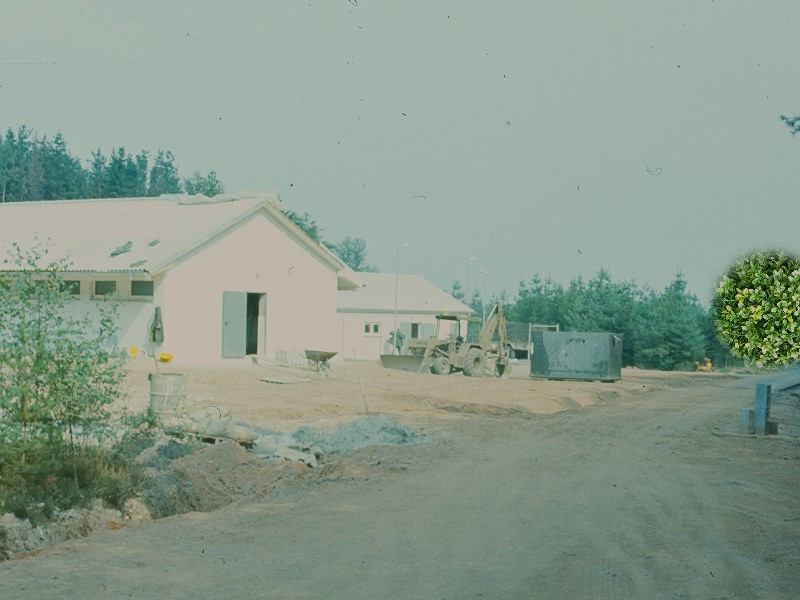 A construction project with a backhoe.

All hard work brings a profit, but mere talk leads only to poverty.
– Proverbs 14:23

Two days ago, I mentioned four tasks in the post entitled “The Source of Joy”. I challenged the readers to figure out which of the four tasks that I had performed. It was a trick question. I had done all four of them. I chose those four tasks because two were hard work, the kind of work anyone could relate to. The other two were tasks that some might think was hardly working, but a lot of knowledge is required to do them.

We each should know the Joy of doing a job and doing it well, regardless of the physical requirements or the mental requirements. The following paragraphs are a few remembrances.

Making Fence Posts
A chestnut tree had died from a blight many years before I was given the task of making fenceposts. The tree finally fell over, blocking the road on our property to the lake. It was a Corps of Engineers flood control lake, so we had to clear the road. My Dad got a bright idea that could accomplish that task and create the building materials for a fence to keep the neighbor’s goats out of our grazing land, and away from the pears that dropped from the pear tree.

He cut the tree’s five-foot diameter trunk into sections the length of fenceposts using a chain saw. While he used modern tools, he handed me a metal wedge and a three-pound sledge hammer. He spent a minute or two showing me how to read the wood grain and cracks. He then went on a long assignment with the chicken processing equipment company that he worked for at the time. I think this was one of his Brazilian 2-3 month long stays.

I knew I had to make fenceposts. That gave me the general idea of how big they needed to be. I hammered the wedge into the wood, and then started splitting rails, Abe Lincoln style.

I have written about this before. Besides learning a lot about reading a tree and making a lot of fenceposts, I had measurable upper body strength for the only time in my life by the end of the summer.

Digging a Ditch – Part 1
When I was in the Basic Engineer Officer Course, just south of Washington, DC, we were given a familiarity program on every highway construction vehicle in the Army’s inventory. When I climbed aboard the road grader, the instructor told me to follow the grade stakes. Grade stakes look like hieroglyphics to the untrained eye. It is a code written on wooden stakes at the edge of the road. The road graders of the day had a steering wheel and about eight levers, operating hydraulic valves, in fan fold arrangement. I then proceeded to trim an inch off the road’s surface. The instructor said that most people had trouble with the grader, but I had done well. Of course, the instructor was determined to make me look bad. For my next pass down the road, the instructor said that he wanted me to dig the ditch. He said that he usually never asked anyone to dig ditches. Those were too hard for beginners. I read the grade stakes for the ditch, pivoted the blade at the proper angle and dug a near perfect ditch. The instructor said, “You’re a ringer! Aren’t you? You have done this before. I cannot believe that an officer could be a ‘natural’ at this.” My reply was that it had to be beginner’s luck.

What I didn’t tell him was that I had to redeem myself after turning another section of road from a smooth road into something resembling the waves of the sea during a hurricane using a bulldozer. I constantly battled the weight of the dirt on the blade – standard rookie mistake, but I was really bad at it.

Digging a Ditch – Part 2
After the grader, I went to the backhoe. Digging a ditch with a backhoe is even easier than with a grader, until the instructor insists that the bottom of the ditch had to be absolutely level. Okay, back to the waves of the sea.

Digging a Ditch – Part 3
A few months later, I was on my first construction site for the Army, somewhere in Germany (location withheld). The ditches had already been dug, but after every drizzle, one section of ditch kept filling with mud. The ground only had to be moist for the earth to flow. The muddy water seemed to swell, filling the ditch and turning into hard ground each time the ditch dried. I grabbed a shovel and started digging.

My platoon sergeant said, “Sir, you cannot do this kind of work. It looks bad in front of the men. If you need this ditch re-dug, ask me and I’ll put some of the men on it. But you are an officer. You should not be doing manual labor.”

I replied, “Sarge, I won’t be out here much longer, and I can continue after the men have left for the day, but I have three reasons to dig this ditch. 1) All the men are already busy doing other things. 2) I am highly frustrated that the task of digging this stupid ditch to drain water away from the buildings seems to be a never-ending task. And 3) I need to figure out what kind of dirt monster has invaded our construction site.” If you have ever watched a monster movie, after saying that and the sergeant walking away, that is when the dirt monster emerges from the trees and swallows the officer who did not listen to the sound advice. But, this was not a movie.

For the answer to my research, have you ever seen the World War II news reels where the jeeps and trucks simply sank into the European soil and disappeared? My conclusion is that there is a lot of Silty Loam soil in many areas of Europe, especially in the bog that they had obtained for the two buildings that we built. When the soil was perfectly dry, it was hard compacted soil. After just a few drops of water, it turned into a thick creamy soup – a lot of water, something close to quicksand. This was the soil beneath my first construction project. A nightmare for construction, but highly fascinating for the mad scientist.

My advice: If you think about building anything on silty loam soil, just give up and buy another piece of property.

Watching Underwater Construction Workers to Ensure their Safety
I was assigned as the maintenance department’s project manager. No extra pay, just a lot of long hours and heavy responsibility. The first time the plant needed to repair something thirty feet below the surface of the water in a cooling basin that could not be drained, it became my job. The construction workers did the work and the diving, but I watched everything through an underwater video camera to ensure the work was done properly and safely. Why include this in the list? It was a bizarre job, but it also marked the last large project before I was transferred to form a maintenance training department. Really, it was my last project as the engineer in charge. Sometimes you never know when one door closes in your career and another opens.

Teaching Failure Analysis for Nuclear Safety Systems
Oh, and accident mitigation as well. Picture this. I was in charge of miscellaneous administrative functions for a group of four or five training departments, again tons of responsibility and no pay raise. Each time a course was added to the long term schedule, I developed a review team to ensure the highest possible quality for the training materials. The team always consisted of a PhD grammarian, myself, the department head for which the training was being developed, the training department head for that department, and a few subject matter experts. For this course, there was no subject matter expert for the entire thing, only a few pieces of the course, other than the author. The text for this course, a 6 day, 8 hours per day, course taught to engineers, was a book of over 500 pages with a lot of terms, or word usage, not found in the dictionary. The author presented the class in thumbnail style to the review team.

Then, the first group of engineers (the trainees) were gathered, but the instructor did not show up. The department head called the instructor (the author of the text) by phone. He had the flu, running a fever of 104+. I was told by the department head needing the training that the only two members of the review team that had actually read the textbook was the grammarian and me. I went to his house and picked up his notes. He left them on the front porch to prevent me getting sick. With no preparation for the nearly 50 lecture hours of the course, other than reading the book a few months before, I pretended to be the world’s leading authority on the subject – even answering the “stump the teacher” questions posed by the jerk (I’m sorry, let me rephrase that to ‘young professional’) from Georgia Tech. (My wife wanted me to add, regarding the young engineer from Georgia Tech, that he was a ramblin’ wreck, and a heckuva engineer.)
Once you have seen the back story for these four tasks, maybe you can get an idea of the times in your life when your circumstances were not the most ideal, but even when stressed out, you can still find Joy, and you can still show that Joy to others around you.

Soli Deo Gloria. Only to God be the Glory.