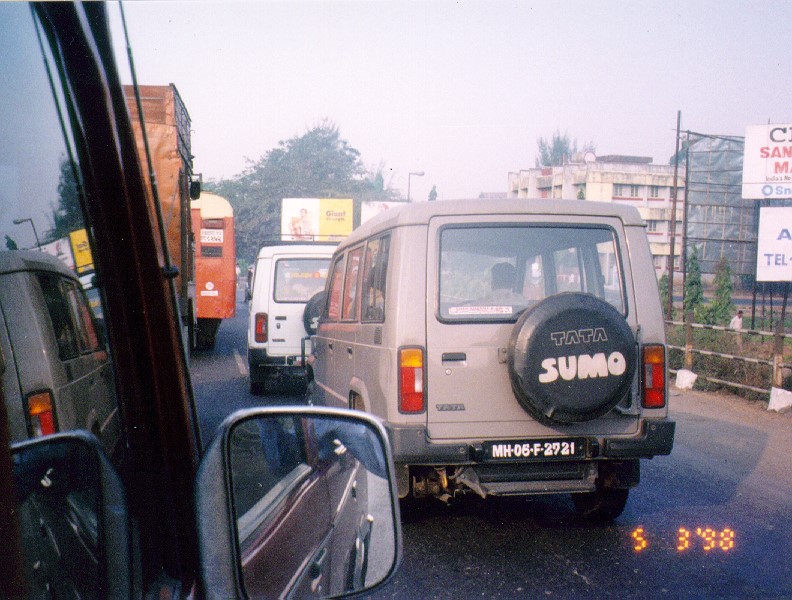 Normal morning rush hour traffic in Pen, Maharashtra, India. The Tata Sumo and the white SUV ahead of it are on the wrong side of the road - a common occurrence. But luckily I never drove while in India. I had an experienced driver.

Whoever dwells in the shelter of the Most High
will rest in the shadow of the Almighty.
I will say of the Lord, “He is my refuge and my fortress,
my God, in whom I trust.”

When I pulled into the front handicap parking spot at the hospital this past Wednesday, exclaiming “We must be on the front row,” (an old reference to a Bob Uecker TV commercial – commercial for what? I have no idea.), I noted to my wife that I felt a blog post coming on.

You see, this was our third stop of the day and we had front row seats each time we parked.  My wife had bloodwork to do.  We went to a clinic associated with the two doctors that needed test results.  Since she was fasting (and me too for that matter), we were there early.  We were the second customer in the building, but the first with a handicap sticker.  The next stop was a family restaurant to cure the fasting problem.  A few customers were in the parking lot, but no handicap – again front row.  The hospital rarely had handicap spaces available.  The lot was almost full, nothing close, except for the front spot right next to the door.

Have you ever had that moment when you felt God placing His hand on your shoulder?  We were in His presence.

God needed me to serve at the hospital that day.  I just did not know it yet.  My wife went to her cardiac rehab, and I went to the adjoining waiting room.  I have written before about how this waiting room doubles as the waiting room for cardio or pulmonary tests, done down the rest of that wing.  There were three couples in the room when I came in.  I overheard one couple talking about how long they had been waiting.  I then noticed paperwork in the man’s hand.

I said, “Sir, you need to go out into the hallway, turn left, and turn that paperwork over to the nurse at the nurse’s station, where it says Testing Check-In.”

He protested, “No, we checked in down stairs.”

I smiled, “But the technician up here on the fifth floor does not know that you are waiting in the waiting room.”

He turned beet red and hurried down the hall.  I have no idea how long they had waited before the muttered their discontent.  It must have been well after their appointment time.

I had no idea that my wife was doing her rehab and taking a 30-minute class on lifestyle changes.  So, I was there through many cardio and pulmonary tests that day.  There were two more couples who came to the waiting area instead of going to test check-in at the nurse’s station.

For once in three months, the television was off.  I mostly read a book, but the whispered conversations could be heard without someone shouting to ‘take the curtain!’  I gently, calmly redirected two other couples.  One thought he had done everything necessary on-line, and the other was expecting a receptionist in the waiting room.  Experienced in hospital procedures (sadly) and enjoying people-watching, I noticed the paperwork each time and calmly, with a smile, helped them out.  There were others in the waiting room, but no one else helped.  The volunteers at the front desk must have been off their game or the couples just did not listen to the instructions.

At times, the waiting room was standing room only.  I offered a man my chair, at one point, so that he and his wife could sit together, both in comfortable chairs, knowing that the metal folding chair that was left in the corner would spark a sciatic flair up.  He refused but was grateful.  Luckily, he was the next person called for a test, hardly any waiting.

To let me know that God was still holding His hand on my shoulder, we went from the hospital to a post office to mail a few Christmas cards.  My wife forgot to put a stamp on one and the other two were to cousins in Holland, thus requiring overseas shipment declarations and weighing prior to assessing postage.  We had to stop for her to go inside.  As we approached the nearly full parking lot at the post office, my wife exclaimed, “Front Row, Again!”  Yes, indeed, only two spaces in the huge parking lot, and one was right outside the post office door.

I screwed up at that point.  I said, “Our next stop is the wholesale warehouse store.  Their handicap spots are never open, and this is December.”  My lack of faith cost me a five-in-a-row, but we were still blessed.  A spot that was four spaces from the entrance was available.  As I pulled in, the Lord had some fun with me.  The handicap spot three spaces closer, the front row space, became empty.  I asked my wife if we should repark.  We had not unbuckled out seatbelts.  I had not fully entered the parking space.  She said that the fun was over.  Let’s get in, get out, and go home.

We had a few things to buy, mostly here medications, and one thing to look for – a kitchen garbage can.  The spring on the lid of our old one broke.  It was very hard to open and equally hard to close.  I was thinking of a swinging gate type lid, but when my wife saw the high-tech automatic lid, she was sold.  We paid more, but we will be able to throw away trash without ever touching the lid (except to remove the trash and install a new liner).  Only one problem.  It takes 6 AA batteries (not included).

WARNING:  Check all toys before wrapping them and putting them under the tree.  Two words can provide instant screams of horror on Christmas morning, “Not Included”.  Don’t be the bad Dad.  This from someone who knows about being the bad Dad.

When we got home, we found a mountain of AAA batteries and no AA batteries, knowing that I bought some two weeks ago.  After her exercise and shopping, my wife needed to rest.  I went to the store.  A block from the house, a woman in an SUV came out of an alley without stopping or looking.  I slammed on the brakes.  I was going slowly down a steep hill, but the road was covered in pea gravel and salt (due to the steep slope).  Even dry, I started to slide.  I honked when she was less than a foot away from T-boning my car.  She stopped but gave me a ‘what are you doing in my way’ look.  Note:  I was on the main road with no stop sign.  She was two car lengths past the alley’s stop sign, the sign that she ignored.

I got to our local grocery store without further incident, but decidedly shaken.  I got a close parking space, second row, and quickly got the needed batteries and was on the road home again.  As I pulled onto the street next to the store, there was a car, parked on my side two blocks ahead, pointed in my direction.  The woman driving pulled out, headed for the grocery store, the one I had just left.  When we had each travelled a block, she was on my side of the road, not bothering to cross over to the proper side, the side containing the grocery store.  As a result, I swung wildly toward the curb, hitting a pothole (no damage, praise the Lord).  I looked at the driver as she passed.  After all, her face was less than two feet from me at the time.  She was a Caucasian woman, but if her skin had been green, I would have sworn she was the Grinch in full sneer, the one with the speck of dust sized heart, not the one at the end of the story.  I started laughing.  I lifted a prayer, “Lord, that woman needs a little help from You.  If I had to look in the mirror each day and had the Grinch looking back at me, I might be in a rotten mood, too.”

So, there you have it.  It is mid-December.  The stores were the least crowded that they may be all month.  (If you were not there, you missed it.  Sorry.)  And God had His hand on my shoulder.  He protected me when I needed protection.  He guided me to a place where I was needed to provide service to others.  (In a way, since they did not know the routine, they were more ‘fortunate’ than I was – as in healthier, but they were still lost, and they would have waited a long time, maybe missing their appointed test.)

We never know how God will make Himself known to us the next time, but if we are living our journey of faith, He will be there.  And you will never know when He will ask you to help others, you just have to be willing to help.