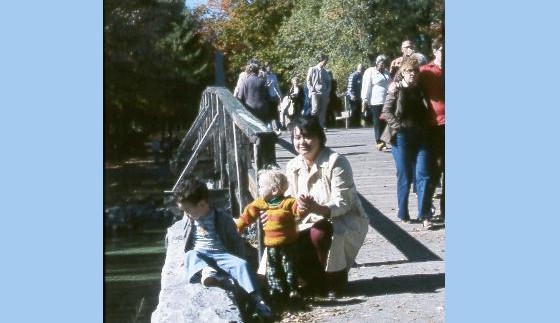 The "Rude Bridge" of historical note is next to Emerson's house. The Minuteman Statue is obscured in the photo by those walking over the arch. And Thoreau's Walden Pond is walking distance away, in the direction that our sons are looking as they ponder a dive into the icy waters.

Where there is no revelation, people cast off restraint;
but blessed is the one who heeds wisdom’s instruction.

“Helen Keller, probably the best known blind person who has ever lived, once said, ‘What would be worse than being born blind? To have sight without vision.’ Recent polling among American college students reveals the majority have no vision for their lives, their families, or their communities. A 2016 George Barna survey reported that three-quarters of all churches in America have either peaked in attendance and influence or are on the decline.

“In Hebrew, ‘vision’ includes ‘divine communication.’  Could it be that the loss of vision among the youth – and among the churches – is because God is no longer their prime communicator?

“God’s vision has always been for the welfare of His children, and that begins with a reconciliation of the world to Him. The part of that vision He entrusts to you will differ from that given to your neighbor, just as the way He equips you both won’t be the same. Do you trust Him enough to do what He has called you to do? Ask for His blessed reassurance today.”

Maybe I was drawn to this devotion because I just had my cataract surgeries scheduled for late May and mid-June.  On one side, the surgeries are fairly routine these days, but on the other hand, I am so tired of not knowing what the score of the ball game is, or the telephone number to call, or “Was that our exit?”  One of the questions that the nurse was required (by the insurance company) to ask was whether I could read small numbers or letters.  I told her, “Sure, I can!  But I have to clean the nose smudges from the computer screen afterwards.”  I think she wrote down that I could not read small numbers, but I am not sure.

I don’t think this is the ‘revelation’, or in other translations, the ‘vision’ that the Scripture is talking about.  I think the key words relate to ‘wisdom’s instruction’ and not something to do with the old eyeballs.

George Barna’s survey for the USA is not the only bleak news.  The Wee Flea, Rev. David Robertson, recently reported “This is the first generation, born in the West, that won’t be majority baptized in 1500 years.  And the decline of the church in US continues.”

I wrote yesterday about hearing, and today about seeing.  The point is that the invisible God can be seen and heard if we seek Him with every fiber in our body and beyond.

It has been many years since my wife became born-again.  That year she had so many dreams and visions that it seemed they would never stop.  She has read the Scriptures a lot more since then, but the dreams rarely appear.  This does not damage her faith.  That is still strong.

But even then, the ‘vision’ is an understanding.  Maybe, to paraphrase Yogi Berra, “If people don’t come to church, you can’t stop them.”  But maybe you can start them.

Do we understand our neighbors who do not go to church?  Do our neighbors have a chip on their shoulder that could easily be resolved?  Are we the ones who are not being good witnesses?  Do we show god’s love toward our neighbors?  Do they even know that we are Christians?

You may be surprised.  When we lived in Watertown, MA for a few months before I left active duty service in the Army, my wife was talking to one of the sergeant’s wives.  My wife said something innocent regarding faith, and the neighbor said, “Sure, we all know that you and your family are Christians.”  My wife guessed that the neighbor had seen us leave for church on Sunday morning, but it may have been in the way we treated the neighbors, and the way we treated one another within the family.

The ‘vision’ of the people around you may not be 20:20, but they are watching.  Show them God’s love.