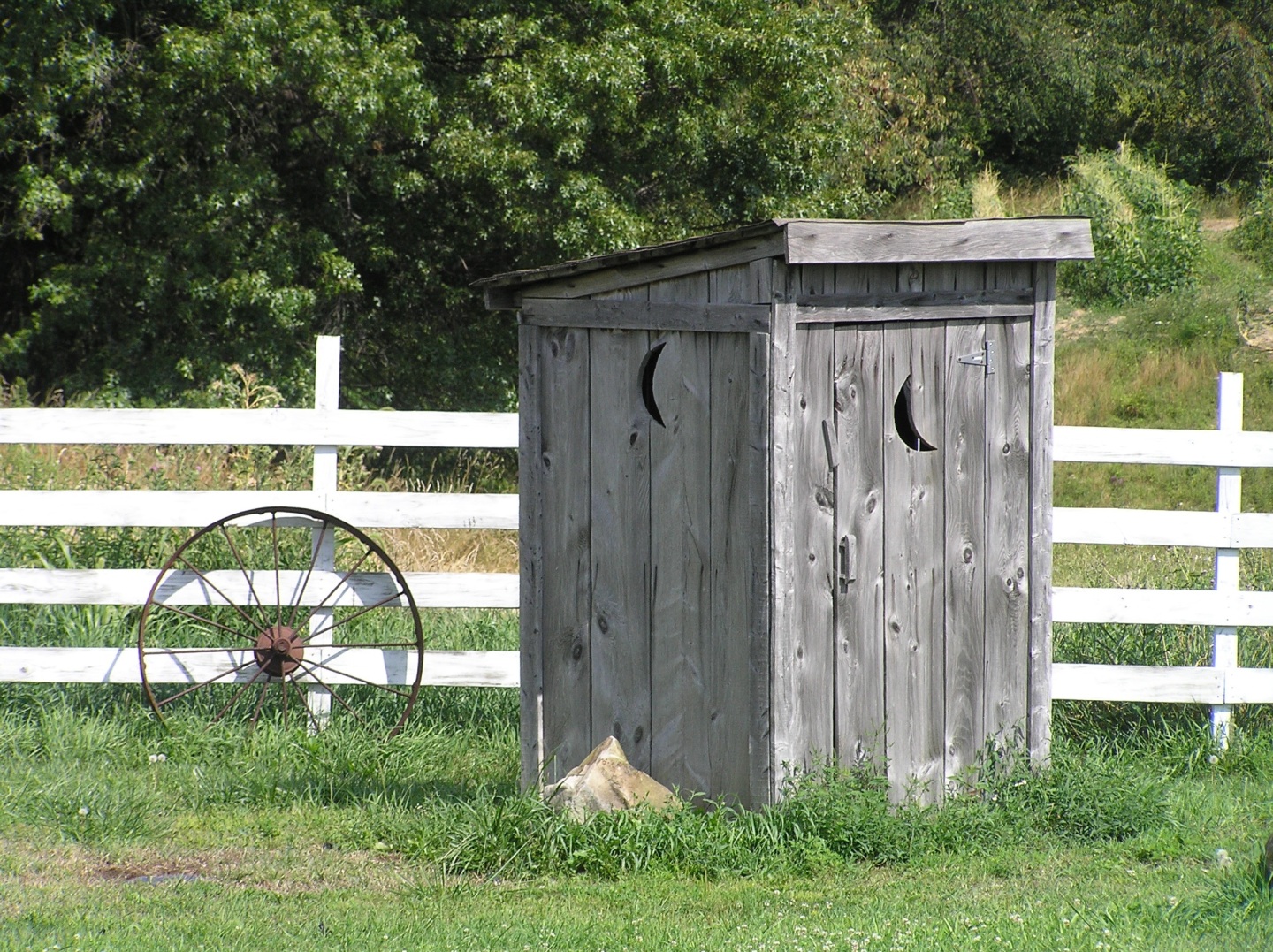 An Outhouse, or latrine if you prefer. Photo courtesy of pxhere.com, a website dedicated to non-copyrighted images.

A cheerful heart is good medicine,
but a crushed spirit dries up the bones.

NOTE:  I am copying this quote verbatim.  Abie Abraham uses the term ‘crap hole’ instead of ‘latrine.’  I apologize if that offends.

“Paul Carpenter crawled out of the hole, wiping his forehead and said, ‘If I should die digging this crap hole, it would be hell.  Why, the mayor of my home town of Dillion, South Carolina, would place a plaque in the town square in my honor.  I could just hear him say at the dedication, “Paul Carpenter was a brave soldier, and gave his life for his country digging a crap hole.”’
“John Wyatt jumped into the hole and told Paul, ‘I don’t want to die digging a crap hole.  When I die, I want my belly full, I know once I get back to Easley, South Carolina, it will be full.’
“Then it was John Rogers’ turn.  He jumped into the hole, ‘It’s sure in hell hot,’ this thirty-three-year-old soldier from Lake City, South Carolina, said.
“Lee Thompson jumped in next.  This Orangeburg, South Carolina, fellow started to sing, ‘I’m in heaven.’
“’You’re nuts,’ Carpenter told Lee.
“’No, I am not, it’s cool down here.’
“Wyatt burst out, ‘Guess we’re like other POWs.’”

My little place of solitude, where I write, is in the basement.  It is cool down here.

And as for the towns in South Carolina, I have visited Dillon many times, my escape when I was allowed to leave Fort Bragg for a weekend during military training.  In Orangeburg, there is a beautiful garden with roses and azaleas, where our family visited a few times.  I think Lake City is the only mentioned town that I have not visited.

Abie Abraham went on to say that the men, who were sick but still able to walk around, would fetch the meals for the one’s who were no longer able to stand in the meal line – the one’s with severe dysentery.  The problem is that when they got that bad sick, they couldn’t eat very much.  Those serving the others would simply scrape the remaining food onto their own mess kit.  “’Why worry about it, anyway?’ one of the men said.  ‘We can’t get dysentery from them, as we already have it.’”

Seeing death daily makes some people numb to the condition.  Gallows humor is often used to lighten the mood, but in the case of Lee Thompson, he found a silver lining amidst the dark clouds.  As for the clouds, from the telling of the story, it seems that the clouds were in short supply as the men complained about the oppressive heat.

I have worked in such conditions in Thailand, India, and even Florida.  Praise the Lord, there was an air-conditioned room nearby or I might not have survived.  My body does not handle the heat very well.  My first time in Thailand, I arrived at midnight.  We had to walk down the steps that were rolled next to the plane’s forward doorway, exposed to the Thai climate.  It was hard to breathe.  When I was in Florida, we had to wear T-shirts (high visibility).  I put high-SPF lotion on my arms, but you could feel your arms sizzle like the skin was strips of bacon, and the sunscreen acted as bacon fat in the pan.

What amazed me was the extreme positive thinking of Lee Thompson.  Forget the death and disease, he was in heaven, simply by being in a hole so that he was a little cooler.  He had escaped the heat, only for a moment.  I know of such cooling.  I was in a ‘POW camp,’ as a training exercise, and the least objectionable punishment was in the water pit, because the water was cool – filthy, but cool.

Have you ever known people like Lee Thompson?  Others usually flock around such people, but that is not always the case.  I have been told to keep my comments to myself at times.  The other person wanted to enjoy their misery for a while before I explained the positives of the situation that we were in.  And my parents called me ‘negative.’  Maybe their negativity reflected off me when I was around them.

Sometimes, when it really gets hard, you look for others to cheer you on, even though God is there all the time.  You need that extreme positive thinker around sometimes.  If he or she is not present, maybe you can find the silver lining.

Some people do not want to see our Joy, because they have none.  Yet, in showing our Joy in times that are tough, we can show God’s love for us and become beacons that light the way for others to see the Source of that Joy, Jesus.