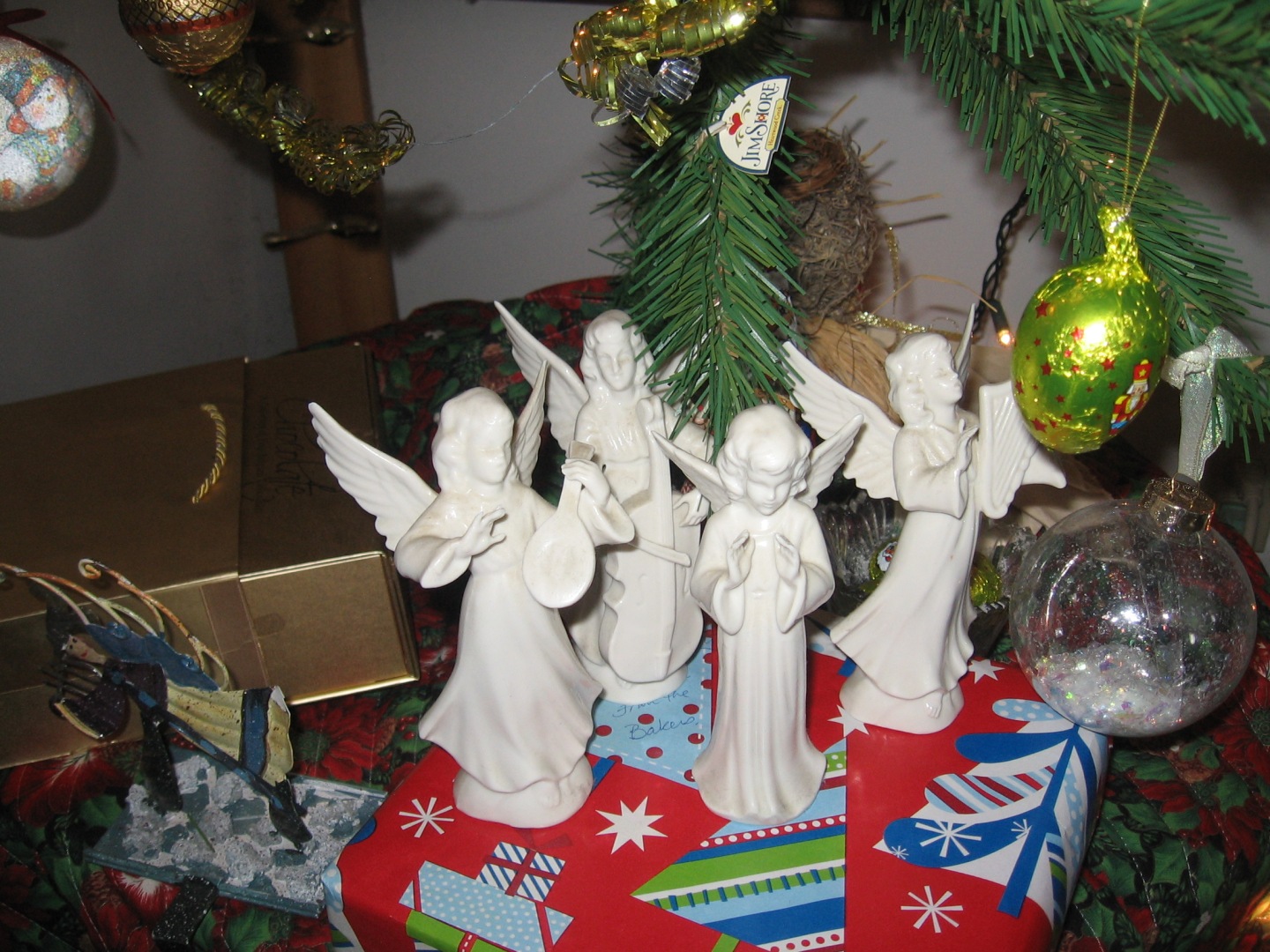 My wife's four surviving angels. What once was an orchestra. She went on a German Crystal Tour when we lived there.

Suddenly a great company of the heavenly host appeared with the angel, praising God and saying,

“Glory to God in the highest heaven,
and on earth peace to those on whom his favor rests.”

“I often counsel young Christians, after they have their Bible and Bible reading established, to get a hymnal.  If a young Christian would spend one year reading through and meditating on the hymns of Isaac Watts alone, he would have a better theological education than four years in Bible college and four years in seminary.  Isaac Watts and others like him were able to put theology into their hymns.  These hymn writers – both men and women – set their generation singing theology.  And the theology of the heart bursts forth in melodious adoration and praise.”

The other day, I looked up Dottie Rambo in my favorite internet search engine and found that she had written over 2,500 songs.  That is a lot of songs.  So, I remembered the quote from A. W. Tozer above, and wondered how many hymns Watts wrote.  He wrote nearly 600.  Fanny Crosby wrote 8,000 hymns and Gospel songs.

But what can we learn from these old songs?  Isaac Watts lived in the late 1600s and early 1700s, yet many hymnals today still have his hymns.  Why?  Tozer was right in that you could learn a lot of theology studying his hymns.  Tozer may have gone too far comparing a one year study to eight years of higher education, but you might be better focused on what really matters.  Most people, when asked about Isaac Watts’ music might mention Joy to the World, but they have probably sung a few of his hymns, those who attend a traditional worship service.  The following video is of a Gaither Homecoming version of When I Survey the Wonderous Cross.  Yes, Love so amazing, so divine, is ageless.

I have heard a few people picture heaven as singing in the choir.  A few of those would love singing Fanny Crosby hymns.  I have said that I would love to have Blessed Assurance sung at my funeral or memorial service.  This next video is again from a Gaither gathering, but with Cliff Barrows directing the audience, Crusade Style – my favorite style.

Fanny Crosby (1820 – 1915), who was blind, was asked how she felt about not being able to see.  She said that she didn’t mind, for the first face she would she would be Jesus.

Dottie Rambo (1934 – 2008) may be best known for a song, sung in a movie by Whitney Houston, I Go to the Rock.  She wrote a wonderful hymn to the tune of Londonderry Air (Danny Boy), He Looked beyond my Fault and Saw my Need.

For those who are thinking that it is odd having three Gaither video clips, well… The first has Guy Penrod singing the third verse. He’s my wife’s favorite Gospel singer. I couldn’t pass up Cliff Barrows directing one of my favorite hymns. By then, I didn’t think any other recording, and there are many, would fit, especially with Dottie in attendance.

But each of these song writers from different centuries are all gone.  Their music lives on because, as Tozer points out, the theology is of the heart.  That will outlive any modern fads or new ways of doing things.

But as I pondered all this, I wondered what songs will be sung in heaven.  Will my friend get his wish and sing nothing but Fanny Crosby songs for an eon or two?

Then it dawned on me that our lives are not over, those of us who are saved by Grace.  We live on.  Is it not possible that Watts, Crosby, Rambo, and many others are still writing hymns and gospel songs in heaven?  After all, on earth, they saw through a glass, darkly, as the KJV would say.  In the NIV, 1 Corinthians 13:12 states, “For now we see only a reflection as in a mirror; then we shall see face to face. Now I know in part; then I shall know fully, even as I am fully known.”

Oh, what beautiful music can they write once they see Jesus face to face.