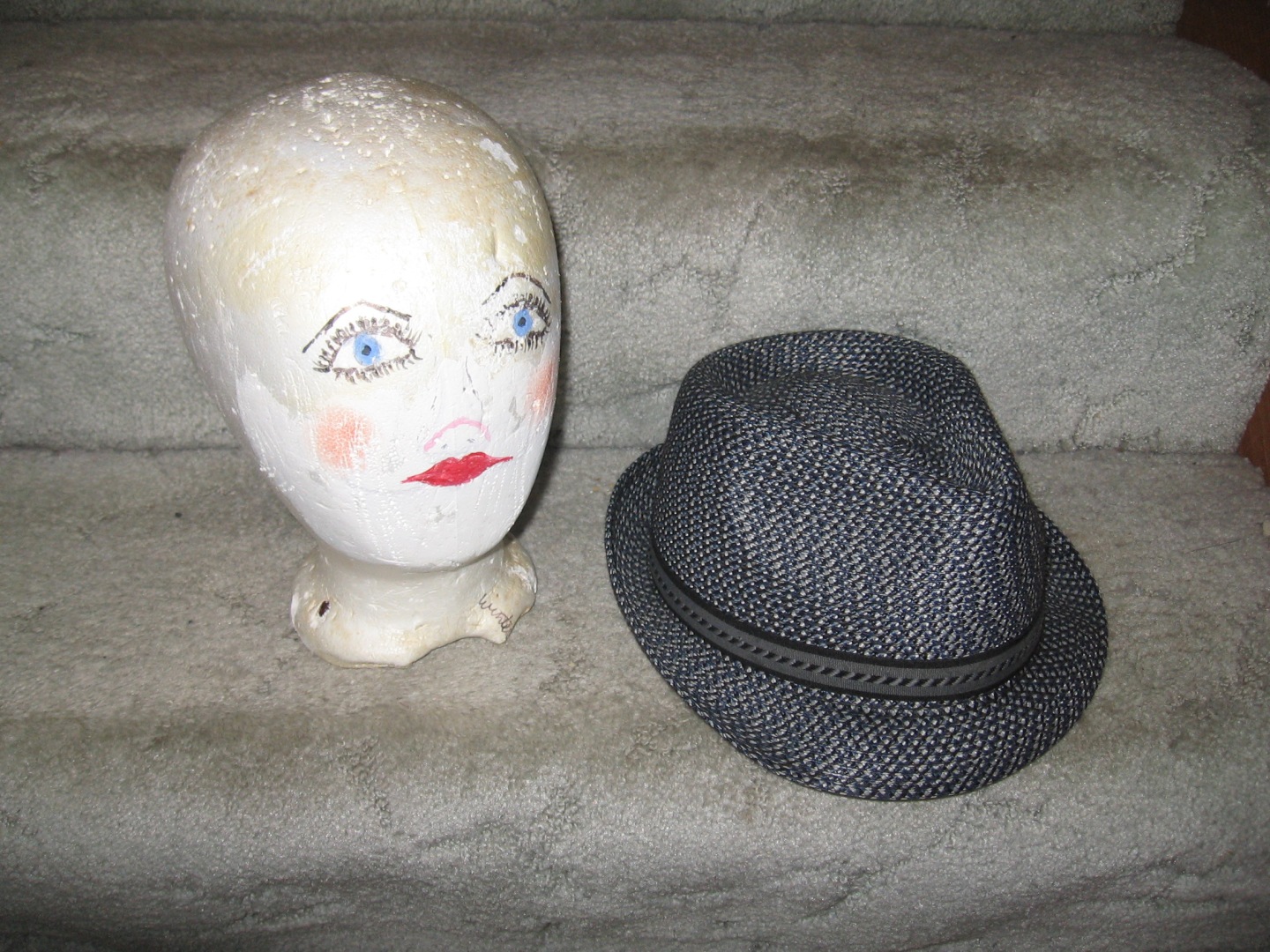 Even the 'model' removes its hat for prayer. The hat: A straw fedora purchased in the French Quarter in New Orleans. For those interested in the model, for many previous posts, it is a Styrofoam head to hold a wig. My mother-in-law painted wooden eggs and wooden shoes, mostly painting flowers. We have notebooks of paintings of animals, and we have framed landscapes. She got the head to practice facial features. Not bad for a first try.

Then Moses and the Israelites sang this song to the Lord:

“I will sing to the Lord,
for he is highly exalted.
Both horse and driver
he has hurled into the sea.

“The Lord is my strength and my defense;
he has become my salvation.
He is my God, and I will praise him,
my father’s God, and I will exalt him.
The Lord is a warrior;
the Lord is his name.
Pharaoh’s chariots and his army
he has hurled into the sea.
The best of Pharaoh’s officers
are drowned in the Red Sea.
The deep waters have covered them;
they sank to the depths like a stone.
Your right hand, Lord,
was majestic in power.
Your right hand, Lord,
shattered the enemy.

“In the greatness of your majesty
you threw down those who opposed you.
You unleashed your burning anger;
it consumed them like stubble.
By the blast of your nostrils
the waters piled up.
The surging waters stood up like a wall;
the deep waters congealed in the heart of the sea.
The enemy boasted,
‘I will pursue, I will overtake them.
I will divide the spoils;
I will gorge myself on them.
I will draw my sword
and my hand will destroy them.’
But you blew with your breath,
and the sea covered them.
They sank like lead
in the mighty waters.
Who among the gods
is like you, Lord?
Who is like you—
majestic in holiness,
awesome in glory,
working wonders?

“You stretch out your right hand,
and the earth swallows your enemies.
In your unfailing love you will lead
the people you have redeemed.
In your strength you will guide them
to your holy dwelling.
The nations will hear and tremble;
anguish will grip the people of Philistia.
The chiefs of Edom will be terrified,
the leaders of Moab will be seized with trembling,
the people of Canaan will melt away;
terror and dread will fall on them.
By the power of your arm
they will be as still as a stone—
until your people pass by, Lord,
until the people you bought pass by.
You will bring them in and plant them
on the mountain of your inheritance—
the place, Lord, you made for your dwelling,
the sanctuary, Lord, your hands established.

“The Lord reigns
for ever and ever.”

“While working on the Student Bible my colleague and I made a selection of great prayers of the Bible, which can be read in a two-week period, one prayer per day.  Some are intimate and private while others were delivered in a very public setting.  Each gives an actual example of a person talking to God about an important matter and teaches something unique about prayer:”

I will be intermittently away from the keyboard for much of many of the days for about two weeks.  I had been praying about what I could write during this period, or for this period.  I try to stay a few days ahead in my writing, but with my cataract surgeries, and – confession time a little laziness – along with the heavy doctor visit schedule, I was writing my posts just in time.  (Pardon the typos, if there were any.  Really my biggest problem is changing verb tense, at will, throughout paragraphs, and within a sentence as Yancey does in the quote, but homonyms and blatant typos do exist after several reviews.)  I had just read Yancey’s book, and I thought of his list of prayers.  The chapter on Prayers in the Bible had started with the Lord’s prayer, gone to the Psalms as a whole, and included a general discussion on the prayers of Paul in his various letters.  Then Yancey lists fourteen prayers after the paragraph above.  The thought of this list struck me.  Then when I re-read the page in the book, the words ‘two-week period’ struck me.  Rather than the Holy Spirit striking me out with a third strike, I decided to write a few ideas – maybe some really short posts – for each prayer.  I will copy the Yancey quote and this paragraph for each of the fourteen, so if you read every day, you can skip this with the remaining parts.

The Song of Moses and Miriam is a song of praise, but praise should be a part of prayer.  It clearly states in the Scripture that they sang this song to the Lord, thus a prayer.  Our prayers can be sung to Him.  He accepts anything: prose, poetry, song, a grunt when we can’t think of what to say – from our hearts, offered to the Lord.

As for context if it is not already obvious, God has just taken the people of Israel over the sea on dry land and then closed off the sea, drowning the Egyptian army.  Notice in Exodus 15:14-15 that they sing of God being so powerful that Philistia, Edom, Moab, and Canaan are powerless against God.  Yet, in Numbers 14, these same people, not their children, these same people, who sang of God’s greatness, would rather be slaves in Egypt than to go against these same Philistines, Edomites, Moabites, and Canaanites.

It seems that most of the people enjoyed the spiritual experience of the parting of the Red Sea, followed by the destruction of the Egyptian army, without ever getting to know the God that they should have been serving.  This lack of knowing God seems to happen a lot among those who go to church.  Bill Bright, co-founder of Campus Crusade for Christ, now Cru, wrote in Witnessing without Fear that he had witnessed to his father and taken his father to a tent revival.  His father went forward and prayed, but Bright’s father was the same the next day.  Bright mentions that his father wanted a religious, or spiritual, experience.  He did not want God, at least not at first.  After several days of the revival and several trips to the altar, Bright’s Dad accepted Jesus.

Would it not be an awesome experience to be sitting on shore and watching the spectacle of the parting of the Red Sea?

But would it not be more awesome to meet the One who did this fantastic miracle?

As for this mountain top experience prayer of praise, sung by the people of Israel, we need to sing such prayers ourselves.  If we don’t, when we get the report from our twelve spies (Numbers 14), we might not remember who our God is either.  Let us all sing God’s praises lest we think the great things in our life were our doing.