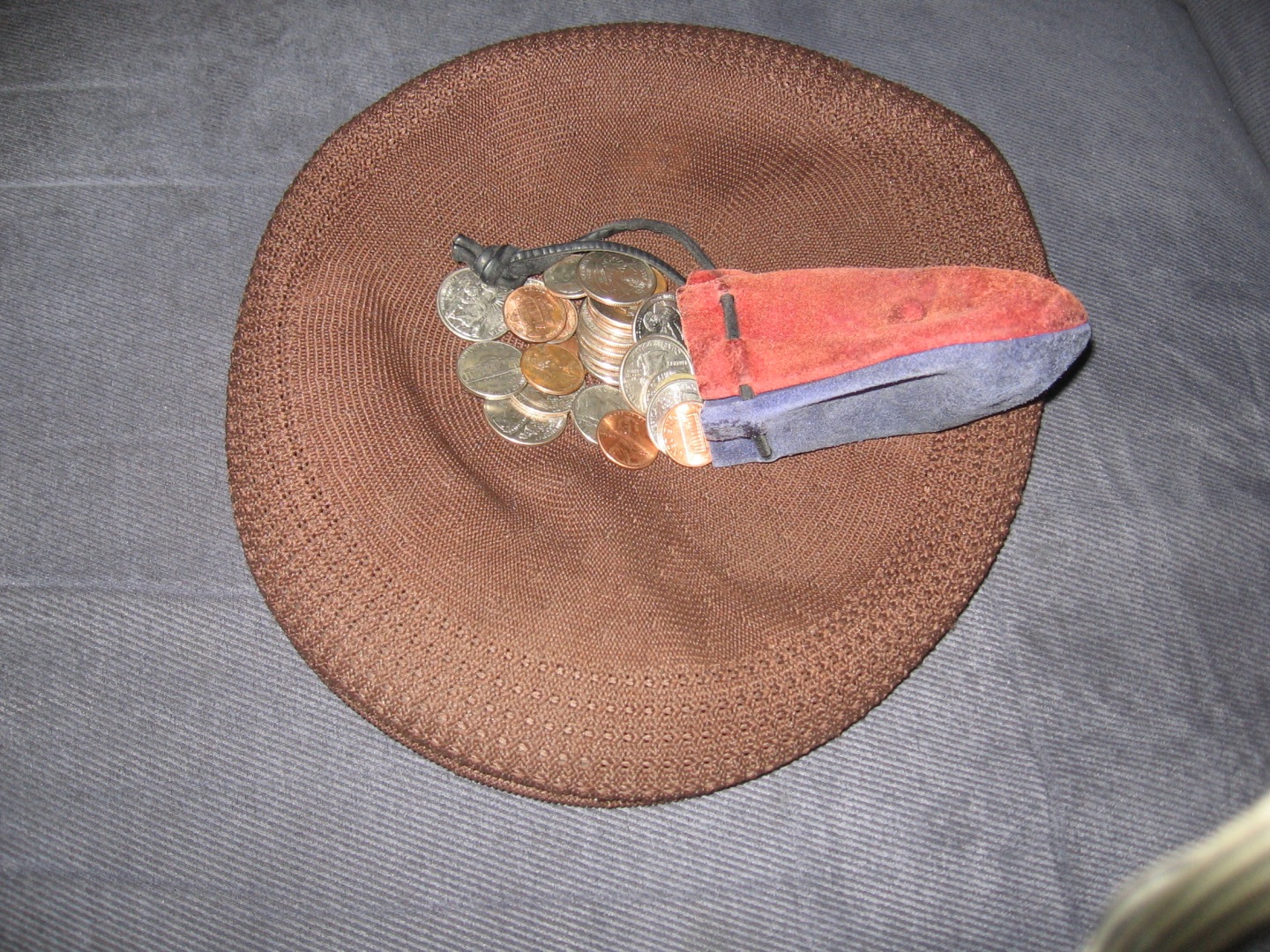 A brown Kangol(R) cap, similar to what Ben Hogan used to wear, purchased in New Orleans, with my money pouch emptied on top. I got tired of losing coins, so I have used a coin pouch for decades now. This one is red and blue (Ole Miss colors). It is far from a sack of gold or a talent, but it comes in handy.

Are you better than Thebes,
situated on the Nile,
with water around her?
The river was her defense,
the waters her wall.
Cush and Egypt were her boundless strength;
Put and Libya were among her allies.
Yet she was taken captive
and went into exile.
Her infants were dashed to pieces
at every street corner.
Lots were cast for her nobles,
and all her great men were put in chains.
You too will become drunk;
you will go into hiding
and seek refuge from the enemy.

Some people say, “Life is a gamble, so why not have a flutter?”  By the way, the Scripture above is one of only 25 mentions of casting lots in the Bible (NIV).

In the Scripture above from Nahum, in verse 10, it talks about casting lots for the nobles of Nineveh.  The repentance that Nineveh exhibited in the book of Jonah was short-lived.  Nineveh would soon be destroyed, and Nahum’s poetic prophecy told of how bad it would get.

Yet, with a little interpretive license, can we not see this curse on Nineveh as a curse on gambling and further a curse on a gambling society?  The verse mentioning gambling in order to have a Nineveh noble as a slave is in the middle of the chapter, but reading bits of the verses before and after can easily relate to someone with a gambling problem.  Note: why would they cast lots for the chance to win a noble as a slave?  Has that noble ever washed dishes in his / her life?

I know gamblers who use burn phones, constantly changing post office boxes (never a street address), and a revolving door of new or used automobiles.  This is not due to extra cash.  No, that has all been gambled away.  These tactics just make it harder to find them, through legal means, when they owe you a lot of money.  I have known 80+ year old women who have had “bill collectors” (otherwise known in the old days as ankle breakers) coming to their house because a family member used “Granny’s” address and phone number when they borrowed money at the casino, allegedly.  All this qualifies as “hiding.”

Were they drunk?  They were drunk on the idea that they were smart enough to beat the odds, but then again, the casino hands out free drinks to ensure that you do not make wise decisions, allegedly.

But this is the extreme, or is it?  What about the office sports pool?  My office partner, nearly 40 years ago, ran the office College Football Pool.  He set the odds.  He ran it by me to see if he had the odds at a generally tantalizing point.  We knew the people in the pool and never used Vegas odds.  Then, everyone in the department pitched in a dollar and we bet on the most interesting college football games for that week.  After two years of my losing every week, my office partner moved to a new department, and I was asked to continue the pool.  Make a note of that; I did not volunteer.  Late in that season, I won two consecutive weeks – one week when half the department did not play, my only two times of winning, ever.  The next week, no one would contribute anything to the pool, because the guy running it, little old me, won two weeks in a row.  Considering how much I had lost in two and a half years, I had yet to break even.  I was never given a chance to win again.  The only way that I could win, in their opinion, was “by cheating,” but everyone had the same information that I had.  It was the inverse of the classic loser, who took his ball and went home to pout.  In this case, everyone else left, leaving me to play with no one.

A few years later, I was in another pool.  There was no money riding on this pool, just bragging rights.  I even got my preteen son involved.  The guy who ran the pool had played professional football for the Dallas Cowboys, Chicago Bears, and St. Louis Cardinals.  He was traded to Chicago to take the place of Brian Piccolo, the running back who died of cancer, leading to the movie, Brian’s Song.  It was great fun to predict the outcome of a few games, when playing against an ‘expert.’  It also established a friendship among the participants.  When an executive came by, he could not believe that we were not gambling, and we had to stop.  My son and I continued our personal bragging rights pool for many years thereafter.  It became harder and harder to beat my son, who started studying the stats, while I went with what “felt” right.  At least I did not use my wife’s method of picking the team with the prettier uniforms.

But bragging rights aren’t good enough for most people.  I joined some friends to play golf at a golf course that I had never played, back 45 years ago.  When we had played just past the halfway point in the round, one of the guys announced what the betting arrangements were going to be.  The others had all played with this guy, so they were in on it.  They had been sizing me up, because I was the outsider and someone just learning how to play golf.  They set the rules so that I would lose everything, based on how I had played to that point.  In other words, Mark, that’s me, was the “mark” in their gambling scheme, really a con game to steal my money.  Some friends they were.  I never played with any of them again.

I told them that I was taught never to gamble away what I could not afford to lose.  The ringleader said, “If there is not money riding on each stroke played in the game, I don’t play.”

In anger, I pulled a five dollar bill out of my pocket and handed it to him.  “There!  That’s your winnings off me.  You fellows can gamble on every shot, but I am either walking back to the clubhouse now, or I’m playing – just not part of your gambling.”  They let me play with them while they gambled, doubled the stacks, doubled again, until the final putt on the final hole was worth more than a day’s wages.  At times, they would tease me when I made a rare good shot, saying that I’d just lost money.  But I knew that with money on the line, I would not have done that well, and I made enough bad shots in the round to lose my winnings if I had been lucky.

This is old news, old memories, but it was brought to the forefront in recent days.  Years ago, sportscasters were reprimanded, some fired, for mentioning gambling odds on a sporting event during the pregame show.  Now they devote entire television shows to gambling.  But when I saw a major television network advertise their pay-to-play phone / computer app, I became disgusted.  Yes, people are fools when it comes to gambling and sports, and money exchanges hands all the time, some legally and some not so legally.  But I thought there were rules against people that broadcast the games from making money off the gamblers.

Gambling is always set so that the house wins.  Yes, some people hit it lucky, but they are few and far between.  And if the lucky one is an inveterate “gambler”, they will just lose their winnings on the next bet.

Gambling can destroy a family.  Don’t ever bet what you cannot afford to lose.  For most of us, that pretty much means to not gamble anything.  After all, life is a gamble.

But is it?  When I rely upon the God of the universe, I rest my entire Hope in Him.