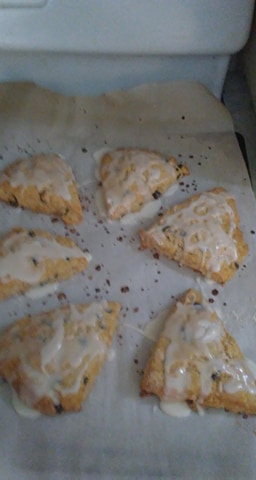 low FODMAP cranberry scone with lemon glaze - using gluten free (and low FODMAP) flour. The only 'cheat' is 2% milk instead of lactose free milk, but I can tolerate lactose in small doses - This is my first attempt at a low FODMAP sweet treat.

When they went across the lake, the disciples forgot to take bread.  “Be careful,” Jesus said to them. “Be on your guard against the yeast of the Pharisees and Sadducees.”

They discussed this among themselves and said, “It is because we didn’t bring any bread.”

Aware of their discussion, Jesus asked, “You of little faith, why are you talking among yourselves about having no bread? …”

I know Jesus says in the Scripture above that we should not be talking about bread at this point, but I must.  I have not had a slice of wheat bread (whole wheat, white, whatever) since I was in Tennessee right after Christmas, and I don’t miss it.  I have tried a couple of brands of gluten free bread, and I have determined that they are both inedible.  I just take a lettuce leaf and turn my sandwich into a lettuce wrap, mostly avoiding ‘sandwiches’ altogether.

I have been doing a lot of thinking since my wife stayed in Tennessee and I returned to Pennsylvania.  For those that have been praying, I needed every bit of it.  My wife has needed a double portion of prayer as our son’s medication isn’t working and all the doctor does is to increase the dosage.  (Hey, doc, maybe it doesn’t work because he doesn’t have the problem that you think he has. Notice the lower case “d” in doc.)

But no, I have thought of this post a lot lately.  I am posting this in the morning, because I may not have a clear Biblical point to make, just trying to make sense of this issue.

I have a friend on a slightly different diet than I am on.  He read Dr. William Davis’ book Wheat Belly, and he lost a ton of weight.  That might be a wild exaggeration in that he didn’t weigh a ton to begin with and a much smaller version of him is still around.  I have not read the book, but my friend has, and he says that the doctor suggests that the modification of the wheat to get a more bountiful crop has altered the wheat so that it does not metabolize like the wheat did in Jesus’ time.

Well, I have lost weight without ‘dieting,’ just by eliminating wheat.  Maybe he has a point, my friend and the doctor who wrote the book, as they say in the South “Bo’fum” (the contraction of “both of them”).  I haven’t lost a lot of weight, because my metabolism is shot due to not having a working thyroid, but the pounds are slowly coming down.  And the thing is that my symptoms of an irritable digestive system, maybe not irritable bowel necessarily, have somewhat gone away, at least lessened, but returning when I eat ‘wheat’.  I said that I have not eaten a slice of bread, but I bought a couple of boxes of Girl Scout cookies the other day (How can you resist a Brownie who knocks at your door?) and one cookie sends me into fits, not bad, but one day I had two…  Big mistake.  And there is so little wheat in the things.  They are small cookies!

But the low FODMAP diet says that you introduce small portions of naughty things to find out which naughty things are tolerated and by how much.  Thus, I am not really cheating.

But, then my wife is having similar digestive issues.  And so many people are going on gluten free diets, wheat belly diets, low FODMAP diets, Keto friendly diets, etc.  Some blindly wish to lose weight.  Some get an occasional tummy ache and want to avoid it.  But some have legitimate medical issues with the digestive system, too many to be a coincidence.

And what do I have the most trouble with?  Wheat and processed foods.  Processed foods, especially sausage, contain polyols, the “P” in FODMAP.  Polyols are the carbohydrate preservatives and binders that hold it all together.  My last hot dog gave me hours of pain and a lot of belching.  Wheat gives me a lot of gas, especially if it has been fermented.  “Fermentable” is the “F” in FODMAP.  Wheat might also be the “M” as the polysaccharides in wheat, the carbohydrates, break down to form Monosaccharides once digested.

Wheat is sneaky.  I enjoy the wheat while I am eating it, but a couple of hours later, once the polysaccharides have become monosaccharides, I feel like I have swallowed a hot air balloon that wants to float above the clouds.  My insides cause so much pressure that it hurts.

All because of modified materials so that the farmer could boost the yield of his crop.

This sounds like a change in topic, but what I distrust in the global warming propaganda is that we, the imperfect humans on this planet, have never “fixed” any global or large systemic problem without creating other problems, and many times something worse than the original problem.  Have we done that with wheat, you know, especially with the wheat that we put yeast in for the dough to rise?

Be on your guard against the yeast…  Or should that be the wheat that the yeast goes into?

Are we causing digestive problems, because we thought God’s creation was not good enough, so we tried to improve upon it?

I don’t have any answers, but that is what I have been thinking about in my spare time in Pennsylvania.