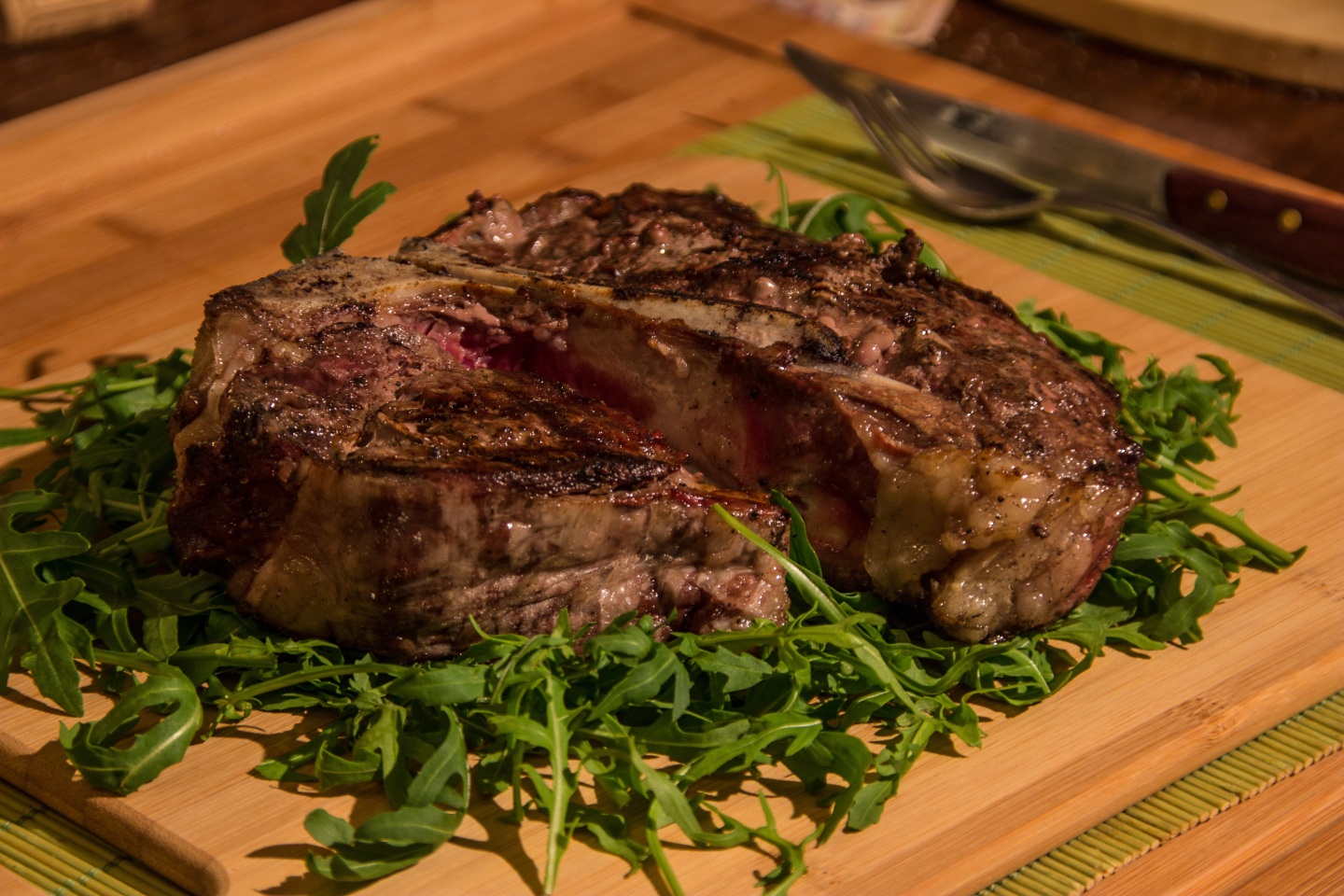 A Large Steak, but probably not big enough for Scrambled Yeggs. Photo courtesy of pxhere.com

I’m Detective Sgt. Deviled Yeggs.  I work homicide in the big city of Tracy.  My partner is Jim Wednesday.  Poached Yeggs, Junior Detective and my nephew, continues to assist us.

Due to the real flu, Jim Wednesday was sick.  He avoided the Blue Flu a few weeks ago, but I think he got both Flu A and Flu B at the same time.  So, Poached and I were holding down the fort in a squad room that was half empty.  Everyone was staring at everyone else, wondering who was sick and who wasn’t.

We had one visitor though; Tuesday Wednesday was looking through Jim’s files.  Jim insisted on working from home.  He could do some computer work while Poached and I did the leg work.

I asked Tuesday, “Tuesday, you and Jim seem to be doing great, but you gave up a lot to marry the guy.  I don’t know anyone that would change their name to seal the deal.”

Tuesday shook her head, “Deviled, most women change their name when they get married.  When I told my Mom that I was changing my name to marry Jim, she said sure, ‘You’ll be Velga Wednesday.’  When I told her that I would be Tuesday Wednesday, she laughed.  Then she paused before she said, ‘If I get grandchildren to play with, you can change your name to Frumious Bandersnatch for all I care!’  I have often wondered since that conversation if I am just a conduit for her to have grandchildren, but, hey, when she visits, she cooks Latvian dishes better than I ever could.  Thursday, Friday, and Saturday love her cooking.”

The Captain yelled through his closed door.  I pretended not to notice until he said, “Yeggs, I know you can hear me.  I’m loud.  It’s one of my better qualities.  Come to the glass and make eye contact, but don’t come in.  If you can transmit the flu to a germaphobe like Jim Wednesday, I don’t want to be anywhere near you.”

Tuesday rolled her eyes.  I complied with his instructions, but I had to comment, “Sir, Oh Captain, My Captain, I am not running a fever.  My sinuses are no more stuffed than they usually are.  I have none of the symptoms of the flu or any other disease that might be going around.  Captain, I am not sick.”

The Captain snarled, “You’re sick alright, but the sick that you are, Yeggs, is a sick that doesn’t have a fever with it.”

“Oh, thank you for those words of endearment, My Captain, now how can I be of service to you?”

The Captain tried to smile, but he failed, as usual.  “I have an assignment for you.  The Abominable Abdominal, aka Richard LaLanne, has escaped from the prison.  You caught him once.  Go do it again.”

“But, Captain, the prison has their own team for that.  If they need help, they call the state guys.  I’m not a bounty hunter.”

“Funny that you mentioned bounty hunter, not that there’s a bounty on this guy, but I think you should get your brother involved.  Who knows, your crazy grandfather probably taught LaLanne how to escape.  Your whole family is one giant pool of suspects.  But as for the prison escapee retrieval team and the state guys, they’re all short-handed.  This flu bug is pretty bad.  Since you visit the prison all the time, you should know more than anyone else that we could send to help.  Take every Yegg you can find and disappear.  I need to disinfect the squad room, once you’re gone.”

With those words of encouragement, Poached and I left to visit the father of Poached, my brother, Scrambled Yeggs.  I hadn’t been keeping up with my brother’s latest activities, worried that he might just be close enough to trouble to get infected.  Poached never talks about him.  I had no idea why the Captain mentioned him, but that became clear when he greeted us at his front door by giving us his business card.  Scrambled Yeggs, Skiptrace Specialist.

Poached spoke first, “Dad, what on earth do you know about fugitive recovery?  I never pictured you as a skip tracer.”

Scrambled smiled, “Poached, ask your Uncle Deviled who I have hung out with all my life.”

I replied, “Scrambled, you’ve hung out with every lowlife in town.  You may have never done anything criminal, but as the saying goes:  You are who your friends are.”

Scrambled laughed, “And in hanging out with every lowlife in town, I know where they all live.  I know their hiding places when they are not at home.  I know all their friends, to whom they might ask for help.  Who better to find these guys than me?”

Poached turned to me and said, “Det. Sgt. Deviled, the big city of Tracy might just be in trouble.”

Scrambled growled, “And I love you too, Son.”  In spite of the lack of respect, Poached got in the back of the car so that the brothers could talk and catch up, all the way up the river, to visit the Old Man.

When we interviewed our Old Man, he let us know about the escape.  He said that the rumor was that the escapee bent the bars, walked through, and then bent them back straight again.  But the truth was that he pulled on his cell door so hard that it broke the lock.  The Abominable Abdominal was strong, but was he that strong?  Our Old Man also told us who his cellmates were and who he hung out with in the exercise yard.

When we got back to Tracy, Scrambled talked to the people that were friends and family of the inmates that the Abominable Abdominal hung out with.  It didn’t take us long to track him down.

Without me suggesting anything, Poached tazed him.  Now we had a problem.  It was probably going to take all three of us to lift him into the car.  When we almost had him in the car, he was starting to regain his faculties.  That’s when Poached tazed him, again.

Scrambled told his son, “Ain’t that excessive force?  You might scramble his brains, Son.”

I laughed, “Scrambled, we could taze him another dozen times and he wouldn’t be as scrambled as you.”

Scrambled growled, “That’s gratitude for you.  You seem to forget that I found this guy.  Now it’s your job to keep him locked up this time.”

Poached and I said, almost in unison, “Oh, Great Bounty Hunter, how can we ever repay you?”

Scrambled scratched his chin.  “Now that you mentioned it.  There was no reward for this guy.  Your Captain has already paid my expenses.  I think this is worth a road trip for a big steak.”

I looked at Poached to ask if that had meaning.

Poached shook his head.  “Dad, you have driven down to Amarillo three times, and you’ve never eaten the whole steak.  And the last two times, I’ve had to pay for it, because you conveniently forgot your wallet.”

Scrambled laughed, “Yeah, Son, I might fail again, but I will be fat and happy and loving every minute while my brother pulls out his wallet this time.”

I did not want to bring up coronavirus in the story, or people might think I was making fun of the situation, so I stuck to the common flu.  If you are holed up somewhere, I hope this has been a fun diversion.

’Twas brillig, and the slithy toves
Did gyre and gimble in the wabe:
All mimsy were the borogoves,
And the mome raths outgrabe.
“Beware the Jabberwock, my son!
The jaws that bite, the claws that catch!
Beware the Jubjub bird, and shun
The frumious Bandersnatch! …”

The Frumious Bandersnatch is also an 87th Precinct novel by the late Ed McBain (aka Evan Hunter).  Evan Hunter passed away in 2005, having written two other 87th Precinct novels after this one before his death.  Oddly, I rarely remember where I was when I read any novel, but in this case, I was at a Holiday Inn in Beijing, P. R. China, waiting in the lobby for the bus to the airport after a week’s work in Tangshan, my third trip to China.  Someone with an accent that I did not recognize interrupted my reading to ask what on earth the book was about, being familiar with the poem. I had to finish the book on the flight as we two strangers became friends trying to imagine what a frumious Bandersnatch looked like.

As for the trip to Amarillo, there are steakhouses across the country that advertise huge steak challenges.  To get the steak for free, you must eat everything, gristle, etc.  The largest steak is not the one in Amarillo, but the Big Texan may be one of the more famous locations for the big steak challenge.  The steak is 72oz (4.5lbs or about 2kg), and at the present time, it costs a dollar per ounce if you can’t finish it.  If you can, the steak is free, and they have a Hall of Fame online.  There are nearly 10,000 people who have succeeded, none named Scrambled Yeggs, at least most likely not.  I only checked about 2,000 of the names.  And you might be surprised how many were small people and how many were women.  People around the world go there for the challenge.  Really, Scrambled didn’t think it through, as if Scrambled could think anything through.  He probably wasn’t even getting paid minimum wage.