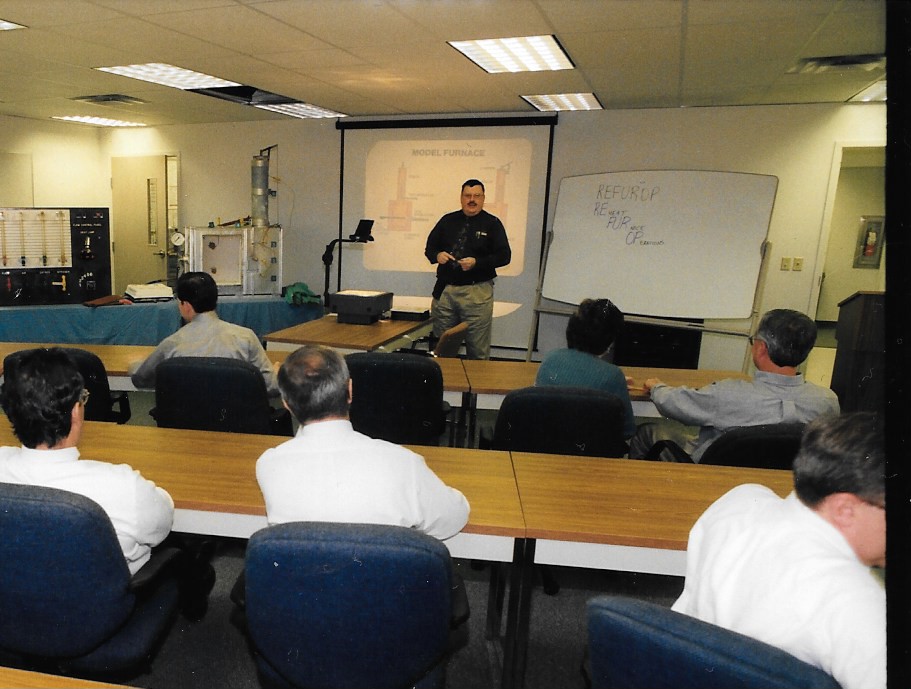 Me in front of a class of fellow employees, doing an introduction before lighting the furnace on the left side of the photo (Oct. 2000)

When the Sabbath was over, Mary Magdalene, Mary the mother of James, and Salome bought spices so that they might go to anoint Jesus’ body.  Very early on the first day of the week, just after sunrise, they were on their way to the tomb and they asked each other, “Who will roll the stone away from the entrance of the tomb?”

[In reference to Mark 16:3]  “We often trouble ourselves about difficulties that do not exist.”

We have something called 20:20 hindsight.  We can read these first three verses of Mark 16 and laugh, but these ladies are in mourning.  They placed their friend in the grave quickly, because at sundown it would be the Sabbath.  They did what they could, but they were not finished.

But they did something that we all do.  I may have been the world’s worst at this through my professional career.  I was a project manager, even when I was just writing a new textbook that I would teach from.  At the onset of a project, I asked myself, “What could go wrong?”  Then I planned for most of the conceivable contingencies, at least those that seemed reasonable and all those that I had faced in the past.  These ladies were smart enough to determine that they might have an obstacle in their path, which is more than I can say for others that I have known.

I noticed how some of the other project managers would lay out their plans and then blindly hope everything went well.  But things rarely went well.  Murphy’s Law always applied.  When something could go wrong, it did.  But instead of planning for contingencies, they planned for two options:  the “Miracle Happens” option (which saved the ladies from their worry) or the “Blame Someone Else” option.  While they were noted masters of problem solving, problems that happened due to not being prepared, I was the guy who seemed to have those charmed projects that never went into crisis mode.  Too many of the bosses looked at me as a subspecies of project managers.  I had never proven that I could recover from a crisis.

But I even did that.  Many years ago, I was instructed by my boss to divide a huge (on a training development project scale) quarter million dollar project into four parts, since there were four people in the group at the time and no one except for me had sold our services for other projects.  I had the responsibility of making sure the four parts fit together as a single training program, but each person had their own duties, and autonomy within it, which the boss insisted on.  Halfway into the project timeframe, my part, the biggest of the four, was completed with customer approval, with a great deal of budget unspent.  Instead of basking in the glow of a job well done, I heard that one of the team members had just parlayed a transfer.  He was about to become our field engineer for a series of jobs in China.  Within a day, I took over his project, made a few minor adjustments, and got his part completed, with plenty of time to spare, again well under budget – but he was like me in his planning.  The third piece fit in nicely about that same time.  But the fourth piece was exceeding budget like crazy, the smallest of the four pieces.  This project manager was eating away at the profit made by the other three.  With about two weeks left before the deadline, I managed for my boss to have me take over the “95% done but double the expense” last piece.  What I immediately discovered was that the project engineer had done an adequate job with what he’d done, but he missed the point of the entire training program.  It was a process control safety course, and he never mentioned safety.  He had not gotten to the halfway point, based on what he had to deliver.  Even then, I did not panic.  I took what I had written on the safety aspects of the overall process, blending in his process description and still made the deadline, without much overtime.

But why did my projects go smoothly almost all the time?  They never did, but I switched from plan A to Plan B to Plan G.  (“G” standing for “Golly, this project has been tougher than greased, grimy gopher guts.” Not that I am familiar with chewing on greased, grimy gopher guts…  Then again, the gopher guts may be similar to Chinese Duck Tongue, which is similar in toughness to chewing rubber bands, and about as tasty.)

But when we plan for twenty or thirty contingencies that never happen, are we not taking it a bit too far?

It seems that Rev. Spurgeon is being a bit too hard on these ladies.  His point is, in his 20:20 hindsight, that Jesus said He would rise again.  Why should they worry about a stone?  But these ladies are wrapped up in their mourning at this moment.  It is perfectly logical for them to be concerned about rolling a stone that they would not be able to roll with the combined strength of all the ladies.  While they had good reason to not think clearly before they left home, having lost the greatest friend they ever had, or so they thought, they were intelligent enough to realize, before they got there, that they might have a wee bit of a problem.

These ladies were smarter than some project managers that I’ve worked for and with, walking up to the stone, placing a hand on the stone, having this look on their face that said that this stone should not be here, and then scratching their heads.  They usually turned to me, and said, “I’m still in charge, but you take over this minor part, and I’ll supervise.”  Ah, how many times did they plan at the onset of a project to find a way to blame me?  Seems to have been countless times.

So, while it is a good idea to plan for contingencies and carefully think through the project first, we have this worrying problem that we need to address.

Jesus has told us that we have no need to worry.  God takes more care of us than he does the sparrows and the sparrows are well taken care of.

Yet, what do we do in our spare time, in all things, not just managing projects?  We try to distract our minds, but then the “What ifs” begin to enter our consciousness.  Then we become paralyzed, unable to move forward, worrying about “What ifs” that could not happen in a million years.

Now that is Spurgeon’s point, harshly applied to the ladies at the tomb.

We think of remote possibilities that we cannot resolve on our own, maybe no one could resolve except God.  We lament that we are doomed, unable to deal with this possibility.  Then what we worried over was worthless expenditure of energy.  There is a book on my upcoming reading list, an old one that I’ve read before, Don’t Sweat the Small Stuff… and it’s all small stuff by Richard Carlson, PhD.  I don’t contend that it is all small stuff, but with God, none of it is impossible.  Why should we worry?

Like the ladies going to the tomb, God already dealt with the situation.  There was no need to worry about it.