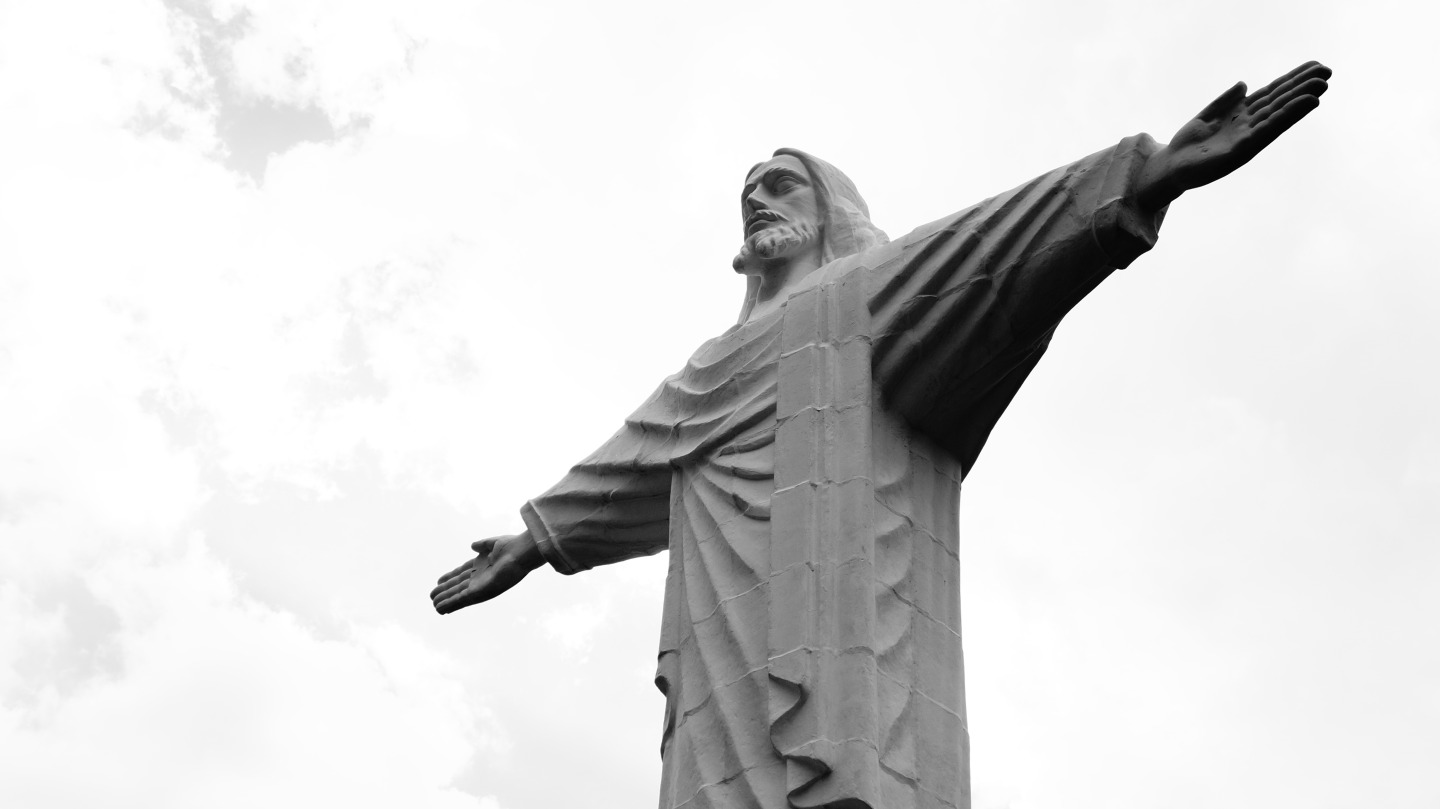 Then Jesus was led by the Spirit into the wilderness to be tempted by the devil.  After fasting forty days and forty nights, he was hungry.  The tempter came to him and said, “If you are the Son of God, tell these stones to become bread.”
Jesus answered, “It is written: ‘Man shall not live on bread alone, but on every word that comes from the mouth of God.’”
Then the devil took him to the holy city and had him stand on the highest point of the temple.  “If you are the Son of God,” he said, “throw yourself down. For it is written:
“‘He will command his angels concerning you,
and they will lift you up in their hands,
so that you will not strike your foot against a stone.’”
Jesus answered him, “It is also written: ‘Do not put the Lord your God to the test.’”
Again, the devil took him to a very high mountain and showed him all the kingdoms of the world and their splendor.  “All this I will give you,” he said, “if you will bow down and worship me.”
Jesus said to him, “Away from me, Satan! For it is written: ‘Worship the Lord your God, and serve him only.’”
Then the devil left him, and angels came and attended him.

“What if Jesus did not instantly know who he was? …
“Or perhaps he knew instantly that he had a special calling and was just awaiting the moment when his powers could be set free.  Either way, I believe that Jesus had to go into the wilderness to find out who he was – that a wilderness experience was as much a part of his shaping and destiny as it is of yours and mine.
“I was once involved in a meeting of real estate developers who were gathered to discuss a joint venture.  Much to our surprise, the organizer of the group stood and began to describe in detail one of his greatest failures. … He said, ‘I am much more careful now to get all the facts before acting on my ideas.’  The person next to him then, with a slightly red face, admitted that on occasion he had not exactly been a genius, either. …
“The youngest member of the group was reluctant to speak … The leader gently chided him, ‘Come on, Charlie, put your rock on the table.  If you have not experienced failure, you cannot be a part of this group.’”

With this introduction to Ms. Jones’ book, I wondered if I was going to get anything out of the book at all.  As I dug into it, it was a marvelous book concept, giving principles of good leadership and showing how Jesus exhibited that leadership quality by giving Bible stories.

But Ms. Jones had a rough start.  The first sentence threw me off in that I believe that for Jesus to be perfect and without sin for His entire life, He had to have known since birth.  And He may have always had “powers,” but He was waiting for that moment when John was baptizing to be baptized Himself to herald the beginning of His ministry.  She goes on to describe the three temptations by the Devil, but she lists them in the order of third, first, and then second – a simple mistake too easy to miss.

But Ms. Jones’ point was that we always need our baptism of fire.  You cannot be part of the venture unless you have screwed up, but more importantly, you admit before others that you have screwed up.  In that way, the others know that you will be more willing to admit that something is going very wrong with the present project.  Someone too adept at covering up mistakes could lead the venture along a dangerous path until it is too late to make a change in course.

The big difference in Jesus and the people in the board room in Ms. Jones’ story is that Jesus had no failure in which to admit.  So, in that respect the story does not relate to Jesus, while it can relate to us.  We’ve made mistakes, sometimes paying dearly for them.  Jesus made no mistakes, but paid dearly for that as well, dying on the cross for our mistakes.

I may return to this book in the future.  The idea of relating Bible stories about Jesus to leadership qualities is a refreshing idea, but you need to start by getting your facts straight.

And you need to focus on why we trust in Jesus in the first place.  It is not His leadership qualities that make Him a great leader.  Those are the qualities that we should emulate.  No, we believe and trust in Jesus because He is God; He paid our sin debt; and He enters our heart when we accept Him as our Lord and Savior.  Jesus is Lord, the ultimate of all leaders.