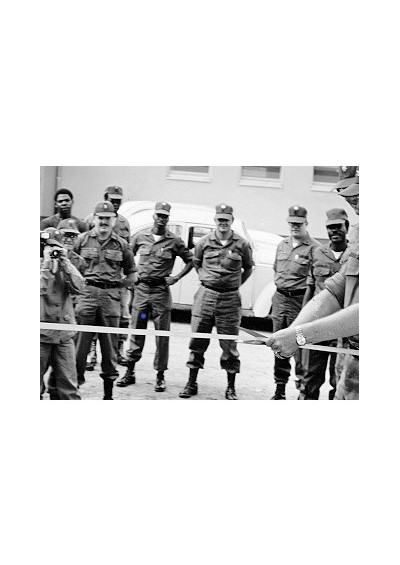 A ribbon cutting that happened one summer when I was overworked.

Pride goes before destruction,
a haughty spirit before a fall.

Blessed are the meek,
for they will inherit the earth.

Then I thought of how I got the bad posture in the first place?  Some of it is laziness, but much of it was the reaction to always being told that I could do better, never being told that I was worthy of praise, never being praised for a job well done.  Thus the shoulders hung so that an over-the-shoulder carrying strap always falls off and backpacks tend to slip – putting the weight in the wrong spot.

Jesus tells us to be a master, we must be a servant of all.  In the featured photo, I recently studied my posture in the photo.  While the other men are standing around, I am at parade rest.  It is a rest position, but a formal one.  My eyes are trained straight ahead, but my chest should be out and my shoulders back.  Just trying to do that now as I type is uncomfortable.  It requires using muscles that I have rarely ever used.

Even one of the Jody calls when we marched in the Army related to good posture and military bearing.  (By the way, a “Jody” is a civilian who makes advances on your wife while you are away on military assignment.  How a sergeant’s barking cadence becomes a “Jody call” is a mystery to me.  A famous Jody call is “You had a good home when you left!  Right!  You had a good home when you left!  Right!  Sound off!  One, two!  Sound off!  Three, Four!  Bring it on down!  One, two, three, four, one two … Three, four!!!!”  This is sung up and down the scale.)  But one Jody call talks about “Chest out and shoulders back, head and eyes off the ground” stuff like that, but I was the officer, walking behind my men, and I had trouble keeping in step – even with the rhythmic barking of nonsense, forget the good posture.  In military training leading up to getting a commission, I did a lot of marching.  As an officer, not so much, thankfully.

And to think that the boss that I had who nearly single-handedly ruined my civilian career said that he only disliked one thing about me.  He said that I had a strong military bearing and I strutted around.  Someone with slumped shoulders does not strut.  I doubt if it is possible.  Thus, it is a mystery what prejudice he had against me, but it was God that orchestrated things for me to get where I am.

I know that Jesus said for us to be servants, but do we have to walk around slump-shouldered, in a posture of servitude?

Why did all this come up?  I have developed back pain in the middle of my back, near the diaphragm.  Since the doctor hears nothing wrong when listening to my lungs, he jumps to the poor posture conclusion that I am just now paying for a lifetime of slumping my shoulders in servitude to parents, teachers, bosses, etc.  As it stands, I limit my time at the computer, with rests a few times each day, or the back pain gets so bad, I cannot sit up.

Even so, God is in control, and He gives me enough good moments so that I can keep up my writing pace.  And I stand firm in the faith as the Scripture from Ephesians says, even when sitting down or lying down during a break in writing.