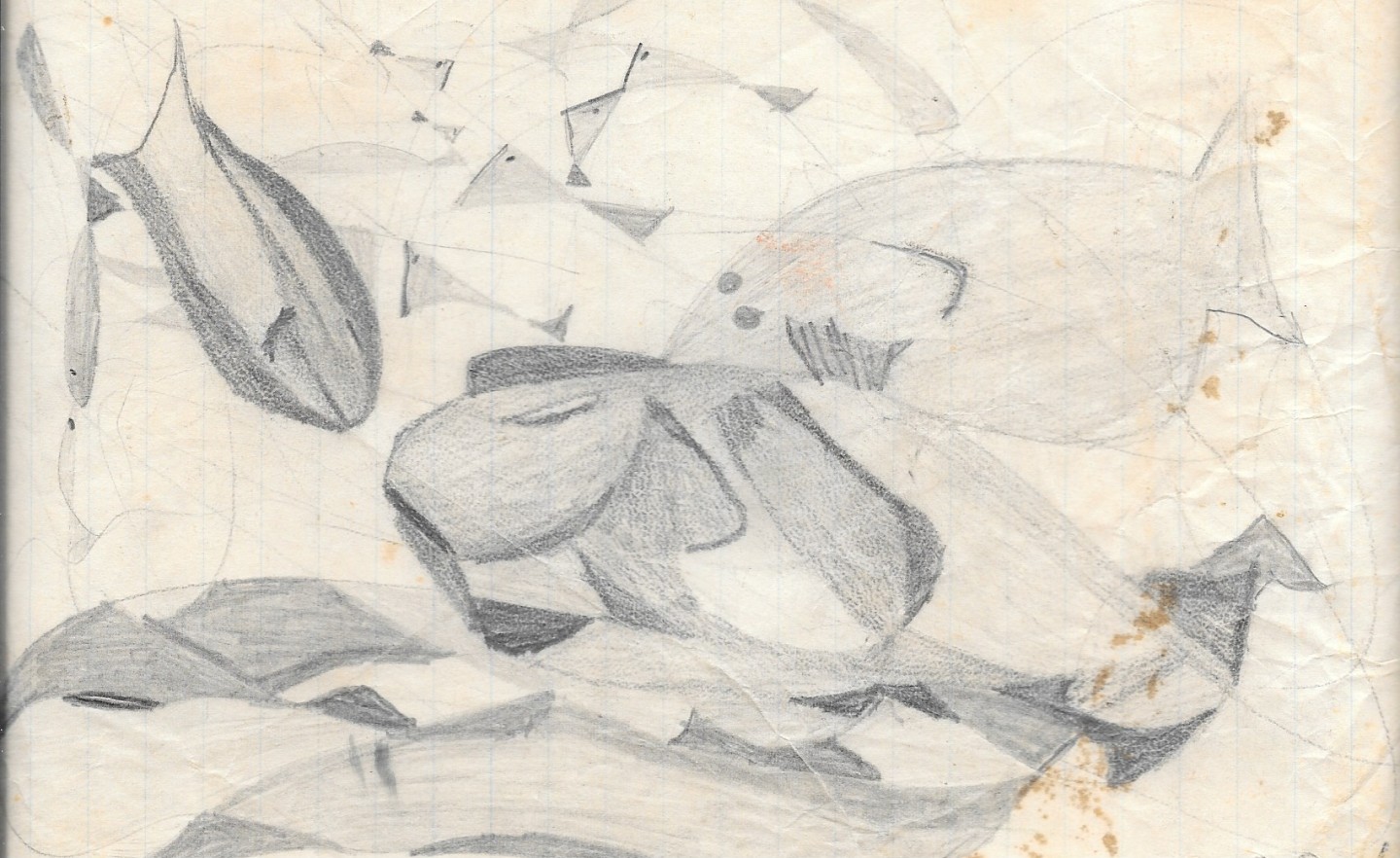 An old doodle by me. I confess that I occasionally got bored in class.

As the crowds increased, Jesus said, “This is a wicked generation. It asks for a sign, but none will be given it except the sign of Jonah.  For as Jonah was a sign to the Ninevites, so also will the Son of Man be to this generation.  The Queen of the South will rise at the judgment with the people of this generation and condemn them, for she came from the ends of the earth to listen to Solomon’s wisdom; and now something greater than Solomon is here.  The men of Nineveh will stand up at the judgment with this generation and condemn it, for they repented at the preaching of Jonah; and now something greater than Jonah is here.

Let me tell a little story.  It could be true of any number of families, but I am simply telling a story, maybe a parable of a Prodigal Daughter.

Once upon a time…  See, I know how to write stories!  But I digress, this is a serious topic.

Once upon a time, a woman became of age and left home.  She had been the model child.  Her father had brought his family up in the Christian faith.  He read Scripture to his children while his wife prayed over each child each day.  While the other children in the house would try to run and hide at “devotion time,” this daughter sat dutifully, seemingly absorbing every word of the Scripture and the prayers.  She was exemplary in her service to others in the community and to her parents and siblings.  Her mother was like most mothers, not wanting her child to ever leave the nest, but they had no fear that this young woman would ever stray from the faith.

But as the young woman started making friends in a new town, she became interested in some friends that did not share the views that she was taught.  She still went to church, but then church attendance became sporadic.  It took a few years before she needed to sleep late on Sunday mornings.

She would visit her parents often, but, like church attendance, the visits became shorter and farther apart.

Then one day, she came home to introduce her parents to her significant other.  They had no intention of marrying; they were already living together.  She wanted her parents to accept her new lifestyle.  She was crushed when her parents said that they loved her, but they could not accept her chosen lifestyle.

In her anger, she said that if they did not accept her lifestyle, they must not love her – an all or nothing fallacy too often employed these days.  She blurted out in her anger that they had crammed Jesus down her throat, and she hated them as a result.

Her father thought of how she had been going to church after leaving the nest.  He asked his daughter about that.

She said that she told God what she wanted, and when He did not deliver on her requests, He either hated her or He must not exist.  This was the worst thing they could imagine being said, and it hurt the parents to their core.

Over the years that followed, as the other children had their bits of rebellion, but eventual acceptance of Jesus, this daughter kept making decisions that seemed to be a personal affront to her parents and to God, thumbing her nose at the Christian world while wrapping the secular world around her for false comfort.

Looks and even behavior can be deceiving.  We do not know what is in the hearts of those around us, unless we have great confidence in their commitment to Jesus Christ.

I am sure that the parents second-guessed themselves about all the Bible studies and prayer, but they should not have done so.  Anger may have boiled at times, seeing how desperately wanton their beloved daughter had become.  But God convicts people of their sin, and we accept or reject God’s offer of salvation.  I heard Rev. David Robertson say in an interview recently that the most dangerous situation for someone to be in was to intellectually believe that Jesus existed and that the Biblical accounts were true, yet not have accepted Jesus into their heart.  The daughter in the story had never been a bad girl; she had no reason, in her mind, to need salvation.

If you couple that dangerous situation with the naïve idea that we can tell God what to do and He will deliver, you basically have someone who does not truly believe, and they want God to prove Himself.  She made her demands, and God did not deliver.  She did not look at the Scripture to see that IF we are right with God and seeking God’s will, then God give us what we desire, because what we desire is more of God.

In the Scripture above, Jesus is saying of the non-believers, the Pharisees and religious leaders, that they demand parlor tricks in order to believe.  They will get nothing other than the sign of Jonah.  Of course, Jesus is referring to His death on the cross and resurrection from the dead.

But if Jesus had performed miracles on their demand, would they have believed?  First, they would think that they controlled Jesus.  They got Him to do as they demanded.  They would then trust in their own abilities, not in Jesus.  Second, Jesus spoke of such a situation.  In Luke 16:19-31, Jesus gives the parable of the rich man and Lazarus.  The rich man, after death, suffered in Hades.  He begged Abraham to let Lazarus go back from the dead to beg his relatives to repent.  Abraham explains that they already have the Scriptures, and even if someone returned from the dead just to deliver a message, they would not believe.

I am reminded of one of the movie versions of A Christmas Carol by Charles Dickens.  After Scrooge talks to his dead partner Marley and Marley leaves, Scrooge excuses the encounter as being the reaction to something that he had eaten, possibly a bad potato.

When we have those loved ones who continue to rebel and continue to go further from God’s teaching with each step, we can only pray.  Hopefully, we have made our life choices open before them, including the explanation of the Gospel.  It is some of the hardest prayers that you might ever pray, but what options do you have?  They must make that decision.  Jesus even speaks of parents and children being against each other.

We pray for the world, our country, our community, and our church, but are we praying for an earthly blessing or are we earnestly praying for the souls of our family, our friends, our enemies, and those we have never met?

I would love to say that this story has a happy ending.  Some of them do, but for those that do not end well, we can only lift our eyes to Heaven and say, “God, you are in control.  You have a glorious, perfect plan, and sometimes I do not understand.  But in all things, Glory to Your Name.”