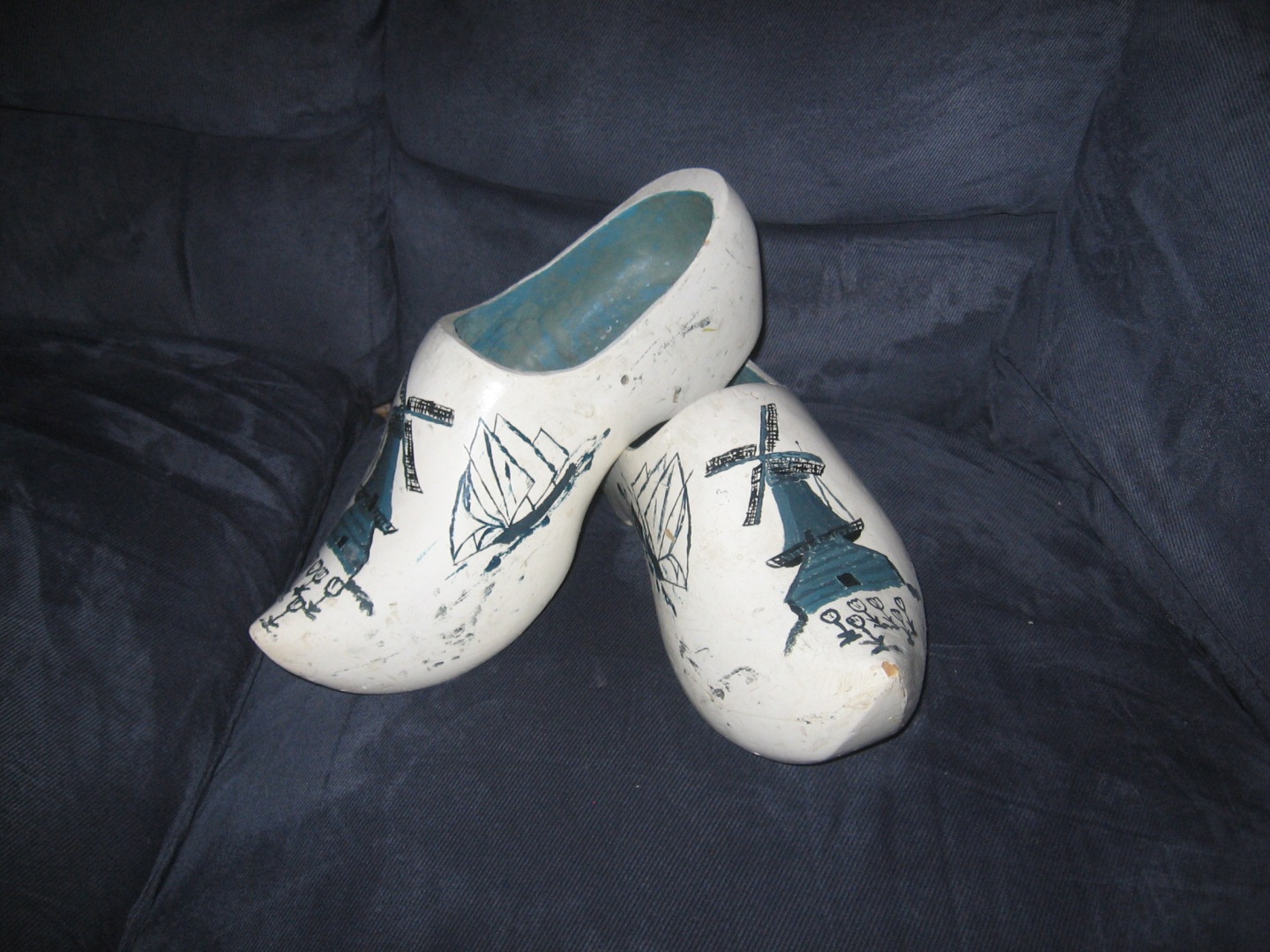 My wooden shoes, size - American size 11-ish. I tried to imitate Delfts Blauw (Delft Blue), at least in range of color. I depicted the four seasons. The windmill on the toes has tulips in bloom for Spring. The sailboat depicts sailing on the Zuider Zee in Summer. The heal has a street scene for Fall (not shown), with people ice skating on the side not shown for Winter. Some of the dark marks are scuffs. They are uncomfortable, but their design is useful. When dirty, just hose them off and leave them on the door step to dry.

Submit yourselves for the Lord’s sake to every human authority: whether to the emperor, as the supreme authority, or to governors, who are sent by him to punish those who do wrong and to commend those who do right.  For it is God’s will that by doing good you should silence the ignorant talk of foolish people.  Live as free people, but do not use your freedom as a cover-up for evil; live as God’s slaves.  Show proper respect to everyone, love the family of believers, fear God, honor the emperor.

When Silas and Timothy came from Macedonia, Paul devoted himself exclusively to preaching, testifying to the Jews that Jesus was the Messiah.  But when they opposed Paul and became abusive, he shook out his clothes in protest and said to them, “Your blood be on your own heads!  I am innocent of it.  From now on I will go to the Gentiles.”
Then Paul left the synagogue and went next door to the house of Titius Justus, a worshiper of God.  Crispus, the synagogue leader, and his entire household believed in the Lord; and many of the Corinthians who heard Paul believed and were baptized.

Rev. David Robertson, the Wee Flea, was critical of Rev. John MacArthur for the comment made at the beginning of a worship service a few weeks ago, the comment regarding welcoming people to a “peaceful protest.”  Rev. Robertson is not the only one who disagrees with the comment and/or the protest.  In an interview with a CNN reporter, MacArthur’s comment on California mandates was overridden by the reporter (not from California and not familiar with what was mandated – thus not factual), but Rev. MacArthur said that people were tired of waiting.  They thirsted for knowledge and they wanted their children to receive Biblical teaching.  They came to the service, and he would not force them to leave.  Thus, he considered it a peaceful protest.  Here is one person’s vlog including his “controversial comment.”

To take this one comment and persecute the pastor for saying such a thing that is contrary to what is said in 1 Peter 2 is to be disingenuous.  In cities around the USA, and loudly proclaimed by the media, there are continued riots, destruction, and looting over seeming racial targeting by the police force nationwide.  A peaceful protest does not get on the news, but when violence breaks out, it becomes newsworthy.  While the organizers may not have planned the violence, they knew that violence would probably happen, and they benefit from it.  Although, like comments made by the president, it boggles the mind that doing criminal acts that largely go unpunished seems counter to the message that these people have a legitimate grievance.  If the grievance is legitimate, a peaceful give and take of ideas should resolve the differences.  Violence begets violence.  But non-violent discussion can create progress.  Few of the perpetrators of the violence are wearing masks and they are not socially distanced.  No one worries about that when police cars are flipped over and set on fire.

Now at a church in California, the church members are attending.  They wear masks – or don’t wear masks – but stand outside a restaurant waiting for a table and no one wears masks.  They sit near their friends and talk to one another.  But the crowd is too large according to California guidelines.  According to Rev. MacArthur, the guidelines are for gatherings, not gatherings among people who have tested positive for the virus – as the CNN reporter berated him over – again not knowing what California had mandated, just guessing, or knowingly lying to silence him.  Yet at MacArthur’s church, he is being chastised for acting responsibly.

LA country has withdrawn the lease on his parking lot. They may try to fine him or even shut down the church for this violation. Yet, violent protests go largely unpunished. Does this clearly make the distinction that violent protest, with destruction of public and private property, is acceptable, but peaceful protest in the form of worshipping Jesus is not acceptable?

That is what is at stake.  Hearing a sound clip of a pastor praising peaceful protest that involves violation of mandates is not the message.  The message is: what is considered acceptable protest?  And what is worth fighting to maintain? As the video above states, the pastor was making a spiritual point, a political point, and he was using humor.  And the government was responding inconsistently.

Rev. MacArthur has also been raked over the coals by the media.  Funny, the media talks of the two presidential candidates arguing over who is behind the riots, each blaming the other party for fanning the flame of discontent, but we would not know about any of it if the media was not the leader in fanning the flames.

I want to know this.  WHO IS POLICING THE MEDIA, WHO CONTINUE TO FAN THE FLAMES and show disproportionate reporting in regards to the election?  We do not need the Chinese or the Russians to interfere with the election.  The media is doing a great job of that.  I can tell you what is on the news tonight, “The Democrats announce the following lies and you should believe them, because they are convenient lies that say what we want said.  President Trump said some things that we would rather not comment on – because we are not prepared to say it is wrong, but give us time.  In the meantime, he did not go off topic to mention things that we could attack, or he did go off topic so here are the attacks.”  That happens on each network, for the most part, every broadcast.  It has continued for the past three years.  When can we elect new media?

But back to Rev. MacArthur, if we take him at his word, the people came spontaneously.  Seeing the crowd, he responded with a joke, but refused to take hobnailed boot tactics and separate the crowd, which could have resulted in violence.  And it would have sent the wrong message.

And Rev. MacArthur’s message goes far beyond the COVID restrictions.

People are hungry for worship.  They are hungry for communion with other believers.  As Rev. MacArthur mentioned in his sermon, at what point do we say that God’s law is being violated and we must stand our ground?  They were not causing a riot.  They were worshipping God.  And if someone who had the virus spread it at the church service, it has been a few weeks; we would have heard about it by now.  It seems the precautions taken have been adequate.

This is not an easy question to answer.  Peter says in the Scripture above to honor the emperor.  Jesus said that if the message is rejected, we must shake the dust from our sandals.  In the Scripture from Acts above, the Apostle Paul shakes his clothing in protest, basically forgetting just the sandals, but shaking the dust from everything to show his contempt for the Jews who had rejected the message that Jesus is the Messiah.

Maybe Rev. MacArthur, and his entire congregation, did some shaking that first Sunday, shaking off the dust from those who wish to silence the Christian community.

Go forth and worship God.  Do so responsibly and shake off the dust of those who reject the message and wish to silence us.