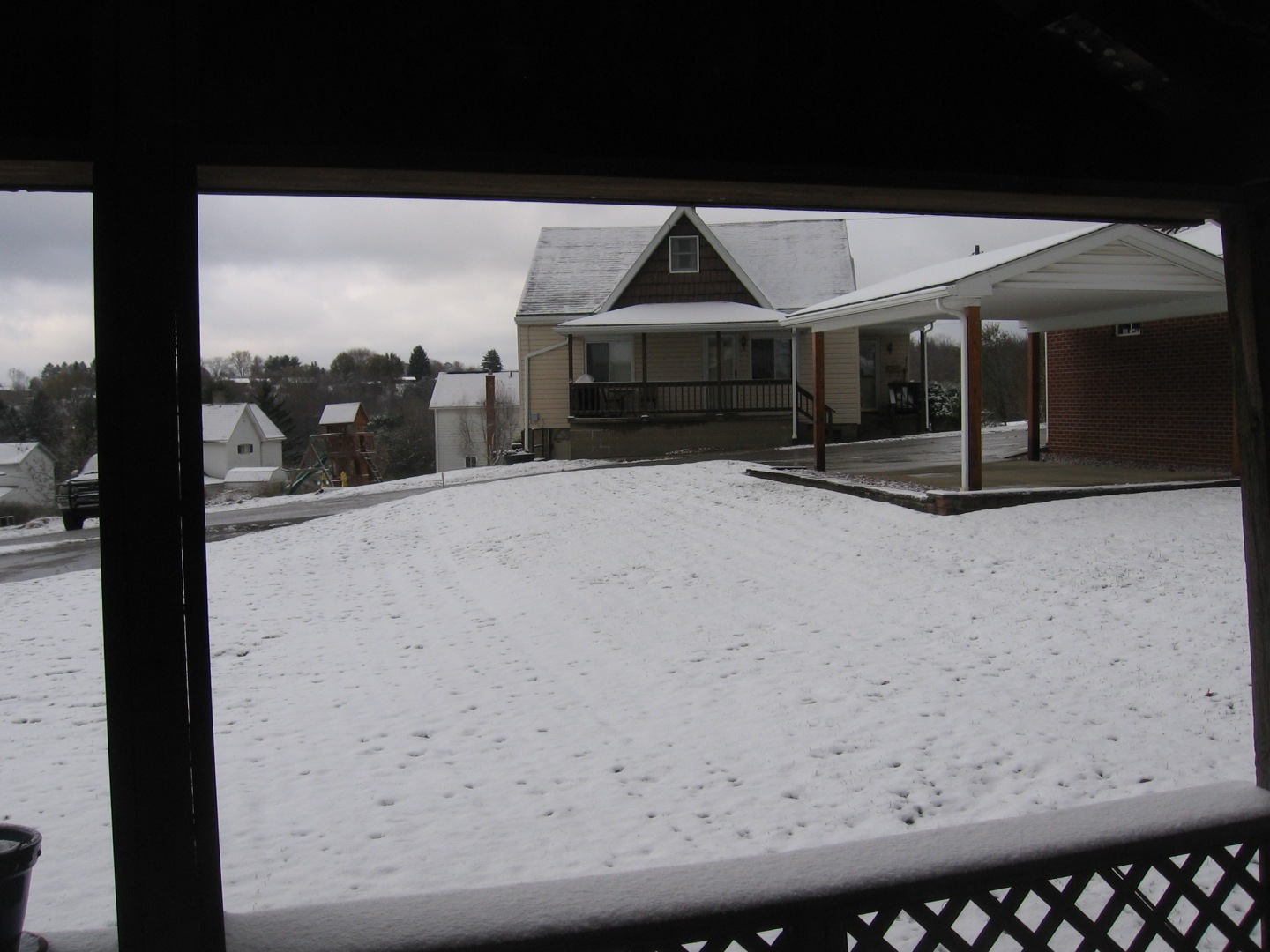 First measurable snow of 2019-2020 season. Our neighbors are hard working, including a few who are retired.

“Come now, let us settle the matter,”
says the Lord.
“Though your sins are like scarlet,
they shall be as white as snow;
though they are red as crimson,
they shall be like wool.
If you are willing and obedient,
you will eat the good things of the land;
but if you resist and rebel,
you will be devoured by the sword.”
For the mouth of the Lord has spoken.

“Anyone who runs a household can tell you how hard stains are to remove from clothing, pots and pans, or a carpet.  Unless you use the right cleanser, a stain can remain for the rest of that object’s life or may even cause you to throw it away.  Stains can be serious business.
“Household objects aren’t the only things with stains, the Bible tells us.  We have one that’s hard to remove, too: sin.  We may have tried to get it out by focusing on good works, but our best efforts have proved less than successful.  It’s like taking a deep, dried-in stain and running water on it – it might move it around a bit, but’s it’s unlikely to eradicate the blot. …
“But God can get rid of sin.  …  Our aching hearts are covered with the cool, healing touch of a Savior whose balm reaches the deepest soul places.
“The change has begun.  In eternity, we’ll see what God now sees – ourselves entirely cleansed by the Son, who made us stainless with His sacrifice.”

I have been listening to a CD when I have dropped my wife off at the dialysis center.  One of the songs features the Gaither Homecoming crowd singing Jesus Paid it All (composed by Elvina M. Hall) with Ivan Parker doing a solo.  I sing along.

Then with the following Celtic Worship, and accompanying aerial views, I could not decide which to use.  Why not both?

But what is the Scripture saying?  I skipped part of the devotion from Pamela McQuade because she said that God covers our sins and then a miracle happens.  The Old Testament sacrifices covered the sins, but the Israelites had to return as their garments began to have the stains show through.  With Jesus’ sacrifice, our crimson stain is washed as white as snow, as if there never was a stain there at all.  It’s that old argument in translation, to use expiation or propitiation.  The key is that our sins are not just covered, they are gone.  Which Ms. McQuade eventually gets right.

There is a home improvement company advertising that they can sell new carpet and cover the installation using reputable people.  But to arrive at that pitch, they show a boy and a dog climbing the stairs and the boy spilling a little of what he was carrying.

Our boys did that.  To take that a step further, my wife hosted Cub Scouts in our house for about 6-7 years.  The flavor packets that you used in those days to get the boys hydrated stained the carpet in such a way that replacement was the only option.  No cleanser that they had at the time worked.  We simply lived with a carpet that had large pink, red, green, and yellow stains.  We reduced the price of our home, once sold, by the amount necessary to replace all the carpet before the buyers moved in.

In our present house that we are renting, my wife and son have spilled coffee.  I am innocent.  I do not drink coffee.  Yay, me, innocent on one, and probably only one, count.  I thought nothing could remove the stains.  The well-advertised “oxygen” stuff made the stain disappear instantly, but a month later, it would be back.  In two months, it would be just as bad as before, having gotten darker.

Then, the water heater went out and I needed to vacuum the water in the basement carpet.  I bought a carpet cleaner on a drastic sale instead of a wet vacuum.  Is it not fascinating how God prompts you to go to the store at just that moment, paying very few dollars more and getting a lot more value? After finally removing the stains, and associated mildew, in the basement, I tackled the living room coffee stains, just for giggles.  Those stains had been in the carpet, growing as more coffee was spilled in roughly the same spot each year.  The stains were dried and more than a decade old.  But I learned that with the right cleanser and the right equipment, the stains can be removed, never to be seen again.

That is what Jesus does when we believe in Him, trust Him, and accept Him as our Lord and Savior.