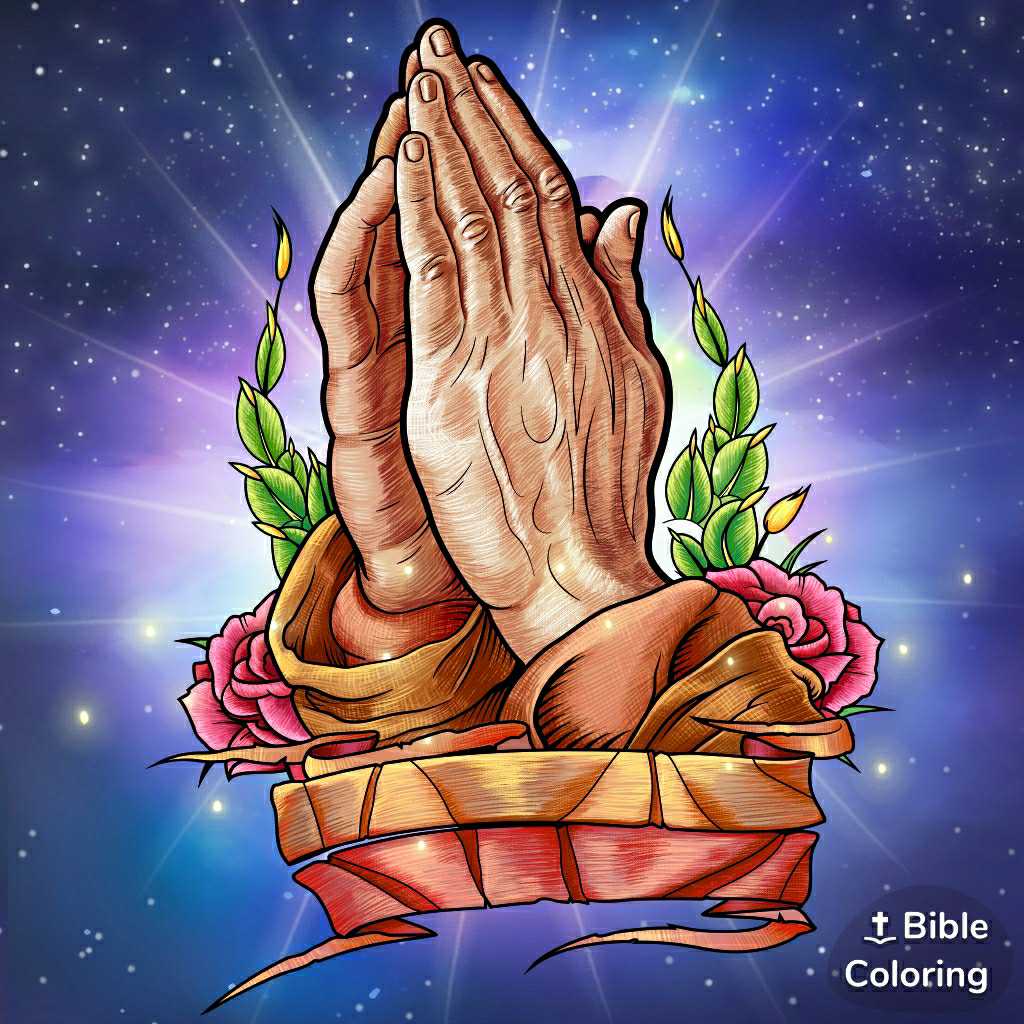 May the Lord bless you from Zion,
he who is the Maker of heaven and earth.

On a television show that features five pastors discussing topics, the topic of the right posture in prayer came up.  One pastor said that folding the hands was not in the Scriptures at all.  Maybe the popularity of the hands together, whether nested fingers or, as pictured above, with the hands flat against each other, stems from the famous Albrecht Durer sketch.

J. Greenwood holds a copyright of the story, The Legend of the Praying Hands by Albrecht Durer.  It seems that two brothers wanted to become artists, but the family could not support both of them in art school.  Albrecht went to art school in nearby Nuremburg, Germany, and Albert remained home, working in the mines, supporting his brother’s dream.  At the end of four years of school, Albrecht was ready to work to allow his brother to attend school.  His brother refused because his hands had been so broken in the mines that he could not do the art that he had loved doing.  It is said that Albrecht’s greatest artwork was the Praying Hands, a sketch of his brother’s broken hands, a symbol that we do not get where we are in life by ourselves.

A month or so ago, I was typing something, and my hands began to hurt, the sign that I needed a short break from the keyboard.  But unlike other days, I looked at my hands.  I had often exhorted people in safety classes to take care of their two hands, their two eyes, their ears, and their feet.  Without those things, we could either no longer do our job or we would be limited.  Those things could not be replaced.  In all those talks, I never made it personal.

When I left the military and had to get a Department of Energy clearance (already having a few clearances – which actually made matters worse for a few odd reasons), I had my fingerprints done three times before I stopped the rent-a-cop print taker long enough to have him look at my left hand.  He said, “Oh.”  But I could see he was puzzled by what he saw, unsure of what to do.  And I said, “Now, are you going to provide some notes so that they do not reject the fingerprints again and we repeat this silly charade?  They wrote down the notes on the first try when I entered the Army.”  He did not like my attitude, but he asked what had happened.

I said, “As for the index finger, I was going to bake an apple cake from scratch when I was twelve years old.  I was alone and unsupervised.  I was cutting the apples and the knife got hung up in the core of one of the apples.  When I pushed harder to cut through, the knife shifted and sliced the side of my finger off, just the surface skin, but completely removed.  The skin grew over the wound, but the fingerprint is gone forever on that one side.  Two fingers down, the ring finger, was put into the mechanism of a seesaw on a dare when I was maybe six or seven years old, inserted at just the wrong time, crushing the end of the finger, but not the bone.  The finger is fine, but the fingerprint is a mangled mess.  You are sending these prints off to be catalogued and analyzed and they are sending them back telling you that you did them wrong.  If they ran the prints through the military system, my name would pop up.  My scars are very distinctive, if you write them down as scars.  Otherwise, I will be back here next month, doing this again.  You see, with hands like these, I could not be a crook.  I am too easily identified.”

He mumbled compliance, and I have never had my fingerprints rejected since.

What the fingerprints do not show is that my life line on my left hand is interrupted by a neat little hole.  I cannot remember when it happened and it only seems to be like a dream rather than a memory.  I can close my eyes and picture someone else’s pencil stabbed into my palm.  I have no idea how it happened or why.  Good thing that I didn’t get “lead” poisoning.  Sorry, old joke since pencil “lead” has been made with graphite for a long time now.

Also, along the side of my hand, I have about a six-inch scar.  I was sprinting down a forest trail, racing a friend when I was eleven years old.  I ducked around a tree to pass him, not knowing that a barbed wire fence had just been stretched, using the tree as a fence post.  The wire was so new that it was invisible to someone in a full sprint.  Talk about rapid deceleration!!  The barb on the wife sliced from near the thumb to a point beyond my wrist.  My mother was so fed up with my cuts and stitches that she bandaged me up and told me to live with the scar.

My right hand has good fingerprints, but one of the lines in my palm has an odd twist in the line.  I was stabbed in high school as I was trying to get the guy to put away his knife.  And as I bled all over the guy, I think I said, “And THAT is the reason that I was telling you to stop horsing around with a knife!”  That one was stitched, twice as the hand seemed to “reject” the first stiches.  What they did wrong?  I have no idea, but for another story, just above that scar is a strange bump.  In college, I was taking a semester-long synthesis lab class.  We were each manufacturing a well-known drug, but I forget what it was.  I think it was used to calm you down, but I am not sure.  At one point, I had to measure the melting point of the crystals that I had created.  In tightening the capillary tube filled with crystals to my thermometer, my hand slipped and the capillary tube broke off inside my hand.  The bump is the broke tip, filled with crystals, and the scar tissue around the piece of glass.  By the way, in spite of the scar, I aced the lab as one of only 2-3 guys who produced any of the final product.

After three attempts to remove the glass from my hand at the college infirmary, the doctor sent me to a surgeon, telling me that it was impossible for him to distinguish between tiny bits of glass, muscle, tendon, etc. in an examining room.  By the end of the semester, when the surgery was scheduled, the scar tissue made it impossible to remove the glass without risking paralysis to my index and middle fingers.  I did not want to turn my fist into an eternal peace symbol or victory symbol, so I opted out of the surgery.  Odd, these days, they will not let you drive home from the hospital, but I drove to the hospital for the surgery by myself with no one willing to drive me home.  Funny how times have changed.

For some people, they show the scars where they broke bones growing up.  For me, it is stiches with no broken bones, unless you count breaking two toes kicking a football barefoot.  It does not seem to count when I did not even get them splinted.

So, I guess I could have made the old safety talks personal, but it might have broken down into a session of showing each other our scars, when the point is that some of our body parts do not grow back.

I wonder what it will be like in Heaven.  I know that I will have a perfect body, but if it did not have a few of the scars, would I recognize myself?

Jesus showed his scars to His disciples.  Was that a sign that we might keep our scars or was it a reminder that Jesus’ scars show how we became worthy to be in Heaven in the first place?