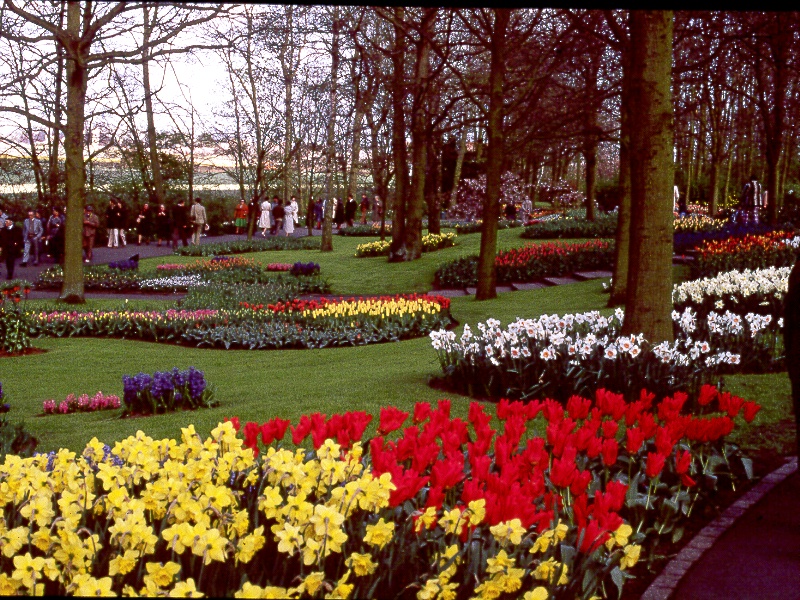 The famed Keukenhof (in English: the kitchen garden) in the Netherlands just north of Rotterdam in late spring 1980

The desert and the parched land will be glad;
the wilderness will rejoice and blossom.
Like the crocus, it will burst into bloom;
it will rejoice greatly and shout for joy.
The glory of Lebanon will be given to it,
the splendor of Carmel and Sharon;
they will see the glory of the Lord,
the splendor of our God.
Strengthen the feeble hands,
steady the knees that give way;
say to those with fearful hearts,
“Be strong, do not fear;
your God will come,
he will come with vengeance;
with divine retribution
he will come to save you.”
Then will the eyes of the blind be opened
and the ears of the deaf unstopped.
Then will the lame leap like a deer,
and the mute tongue shout for joy.
Water will gush forth in the wilderness
and streams in the desert.

“… it is evident that man never attains to a true self-knowledge until he have previously contemplated the face of God, and come down after such contemplation to look into himself.  For (such is our innate pride) we always seem to ourselves just, and upright, and wise, and holy, until we are convinced, by clear evidence of our injustice, vileness, folly, and impurity.”

The Scripture is one that I have used before.  My wife is Dutch, born in Indonesia and then escaped near the end of the revolution.  As she and I both gained interest in each other’s heritage, I became interested in growing bulb flowers.  I had grown up with Jonquils that covered one entire hillside, so it came naturally.  But after visiting the Keukenhof near Rotterdam in the Netherlands and the botanical gardens at various palaces in Germany and Austria, my interest intensified.  Having a home let me experiment, but we have been renting for thirty years since then.

But I am not looking at the tulip bulb or crocus bulb in this case.  I am thinking of the acronym, TULIP.

Benjamin Vrbicek, in his blog entitled TULIP Quick Reference, says that TULIP was coined in the 1600s, after Calvin’s death.  The followers of Jacob Arminius (where we get Arminian theology) had written the Remonstrance in response to Calvinistic theology.  The Remonstrance had five points.  The Calvinists responded with the Canon of Dort, also with five points, but not using the language necessary to create TULIP.  Thus, in reading John Calvin’s Institutes, you will find the concepts, but trying to find TULIP is kind of hard.

The post last week, Looking at Oneself, and the quote above give a good illustration of total depravity.  I think that, as language changes and as modernity filters into the church, making the church more secular, total depravity is a term most churches, including churches with Calvinist roots, would love to avoid.  Yet, how can you avoid it?

Romans 3:23 states that all have sinned and fallen short, even those who think of themselves as just, upright, wise, and holy.  (Yes, thinking of ourselves as “holy” shows we have no concept of what “holy” is.)  While Pride is one of the deadly sins, there is no commandment that states, “Thou shalt not be prideful.”  Yet, it interweaves so many.  Being proud to an unrealistic degree means that we worship ourselves, as a god, instead of worshipping God alone.  Being prideful can lead to any number of other sins being swept under the rug.  The other guy’s sins are much worse, and nobody will know that I ate a banana while shopping for my groceries.  (Okay, that might be a bit obvious, but…)  Besides, who doesn’t eat a few grapes while going through Produce?  I, for one, do not, since I am allergic to them, but oh, how I have noticed others nibbling their way through the Produce section.  And who has not driven over the speed limit?  Who has failed to come to a complete stop at a stop sign?  But then, who among us has been calm at all times regardless of the circumstances, including the time when a guy did not stop at the stop sign causing us to slam on the brakes, without getting a bit angry at someone else?

Yes, if that is it, the sum total of our sins, then we might just think that we are just, upright, wise, and holy, until we come face to face with God.  We might be fully dressed in His presence, but in seeing our own unworthiness, unworthy to be in His presence, we might look for a shrubbery to hide behind as Adam and Eve did.

And I truly feel that if we do not come to that realization that God is Holy and we fall so far short of God that we cannot hope to compare, we will not be poor in Spirit as Jesus said in the Beatitudes.  We might never feel the need to truly repent and turn from our sin.  We might never desire to be more like Jesus, thinking that we are “okay” the way we are.

My wife has been having some difficulty in the past couple of years thinking clearly – some think as a result of open-heart surgery and other issues.  Not much of a problem, but noticeable to those who love her.  After getting lost the last time she had the car by herself, I have driven her ever since, other than little trips within our town for groceries or mailing a letter at the post office.  The neurologist that she recently went to see said that she might not be getting very good sleep, and that could lead to cognitive issues.  She sleeps without noticing that she ever fell asleep, and she no longer snores, okay, rarely.  She has not had a memorable dream in a long time, for over a year, and she used to have them often with total recall of every detail, in color.  She had a sleep study recently, and the technician seemed to have similar observations.  We may have the official results by the time this is published, but not as of the time of writing.  But after her doctor visit, she was explaining what the doctor thought may be the cause with a family member.  She said that she was “sleep depraved.”  I told her that she had invented a new disorder.  Instead of sleep deprivation, she had invented “sleep depravity.”  After a few seconds to think it over, she started laughing.

But to use both of those words, let us not be deprived of our ability to see our depravity.  In other vernacular, the point in which we see our total depravity is the point where the Holy Spirit convicts us of our sins, so that we may come to a saving knowledge in Jesus our Savior.