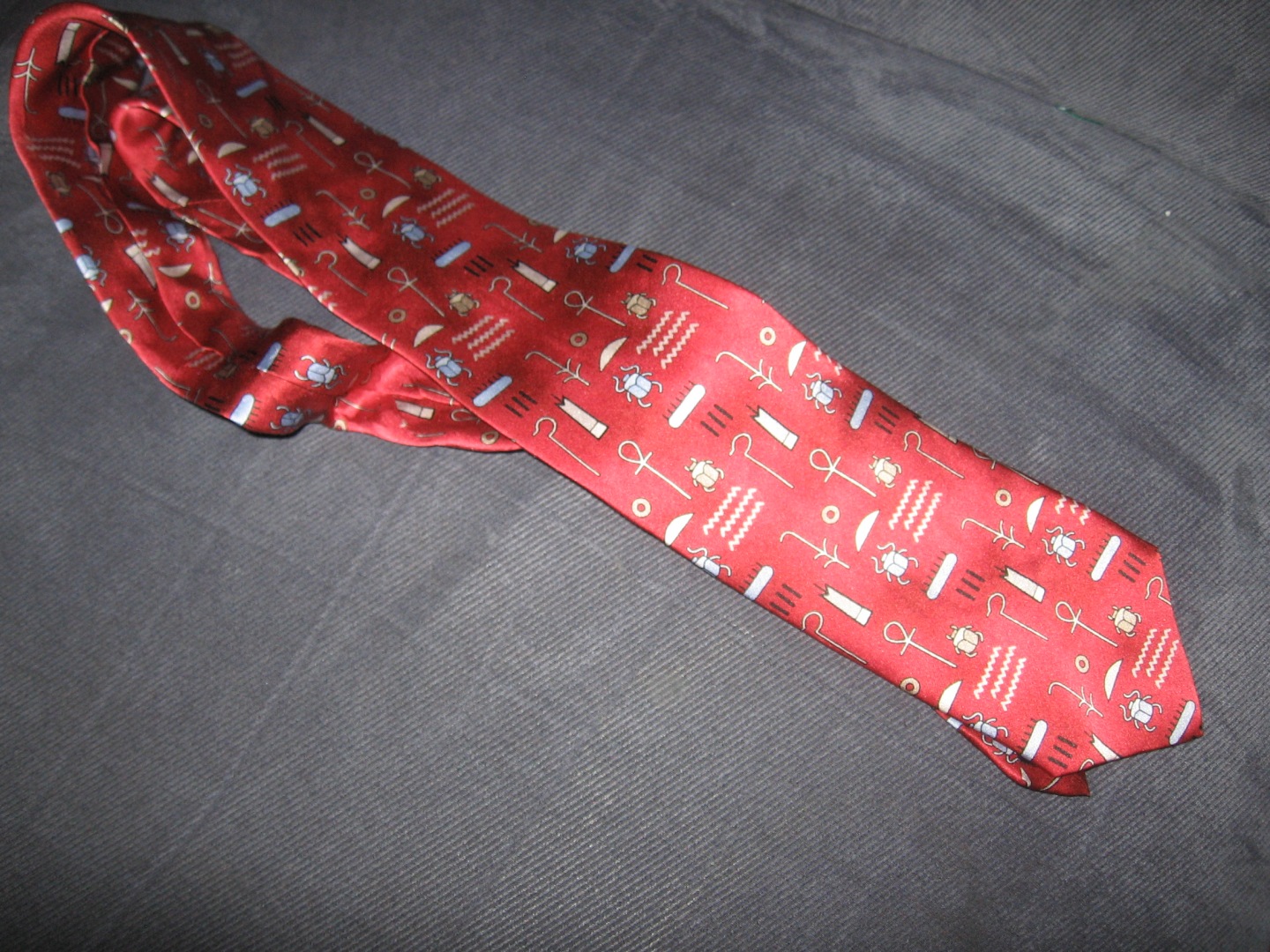 A necktie purchased at the King Tut exhibit in Seattle, WA about 7-8 years ago.

The sons of Ham:
Cush, Egypt, Put and Canaan.

Funny, I could have started the quiz with the question: “What is the first mention of Egypt in the Bible?”  The answer: Genesis 10:6, but as a son of Ham, not the country or region.  In some cases, the regions near the Promised Land are named after people that originally settled there, the reason for some of the genealogies in the Bible.  While Genesis 10:6 mentions Egypt as a son of Ham, Genesis 10:7 mentions the sons of Cush, one being Sheba.  There has been much written about where Sheba might have been located, but we know that the land was named after a grandson of Ham, a great-grandson of Noah.  In some translations, the name for Egypt is listed as Mizraim – the Hebrew name for the same word possibly.

But before we get to the quiz, I have an odd question, possibly rhetorical or maybe no one knows, where did they put Put?  After Genesis 10:6, you get the descendants of Cush, Egypt, and Canaan.  No Put!  Did Put putter out without any children?  Did he only have girls?  Inquiring minds want to know.  Then again, if it is not in the Bible, is it really needed to know about where they put Put?  No more frivolity or I will think of playing Putt Putt for the rest of the day…

Enjoy this quiz about Egypt.

But first, since Egypt enslaved the Israelites and Egypt, as a world power of those days, often oppressed their neighbors, some of these questions and answers may not show Egypt in a good light.  Some of the videos may not be politically correct either – just too funny to pass up.  If I offend anyone, I apologize in advance, but in writing this quiz, I am reminded of my wife’s friend in Richland, Washington.  She worked at the grocery store that my wife preferred, and they started talking one day.  My wife was surprised that this Egyptian immigrant was a Christian, and her friend began to teach her about the Coptic Church.  The Coptic Church of Alexandria was founded in 42AD.  “Coptic” is basically “Egyptian” in the ancient Greek language.  It is very possible, therefore, that there is a Bible called the “Egypt Bible” or “Coptic Bible,” but this quiz regards references to Egypt in the Bible.

As for the photo above, I provided training at a steel mill in Seattle, WA while the King Tut exhibit was on display. One of the days when I got away from the mill early, I took my wife to the exhibit, a few blocks from our downtown hotel. This necktie has hieroglyphics on it. At one point, I knew what each symbol was and its significance, but my brain has become leaky.

In the book that is quoted in the other questions, the original wording of question 8 above refers to “Israel’s ghetto.”  For one, the term “ghetto” is considered a derogatory term and this land was the choice land for agricultural use.  The term “ghetto” means where the Jews were ‘required’ to live.  Again, this being choice agricultural land, it was the best place for them, granted to them by pharaoh.  As time wore on and a new pharaoh, who did not remember why these people, were there came along, the Israelites were looked down upon and eventually enslaved.  Really, in those ancient times, shepherds were looked down upon regardless of ethnicity, because they smelled like sheep.

And for question 15, the governor left behind by the Babylonians chose to go to Egypt for protection, against the prophecy of God through this prophet, yet, the prophet and his assistant accompanied them to Egypt. I felt the question was adequate, but it might be a bit misleading with the words “carried off.”

While Egypt enslaved the Hebrews and went to war against them, Egypt was a place of refuge, recorded several times in the Scriptures.  I included the questions 1, 4, and 15 to illustrate that.

Since you did so well, treat yourself to a Earnest Gold tune, lyrics written and sung by Pat Boone, the theme for the movie Exodus.  The 1960 movie was about a ship called the Exodus and how the character played by Paul Newman fought his way through resistance to get the refugees on board to the Holy Land.  While the original Exodus was exiting Egypt and eventually arriving in the Promised Land, the movie depicts the return of the Jews to what is now Israel.  The movie is based on the book by Leon Uris.  Otto Preminger, the director and producer of the film, softened the anti-British and anti-Arab sentiments from the novel, but even so, there was backlash over the depiction of the Israeli-Arab conflict.  The film received three Oscars:  One for cinematography, one for Earnest Gold’s musical score, and one for best supporting actor, Sal Mineo, seen briefly in the video, and to the far left in the thumbnail photo for the video link.

Of course, if you did not do well on this quiz, maybe this song from Steve Martin is more your speed. This from Saturday Night Live. It is odd that years later, Steve Martin claimed to not remember the lyrics. Could it be that he was afraid of being “cancelled?”

Or maybe the Bangles hit…

And God showed His great wonders with the Ten Plagues of Egypt.  The last being the death of the first born.  But the Israelites were spared because they prepared a Passover Lamb.  And several centuries later, Jesus became the perfect sacrifice at the time of the Passover.