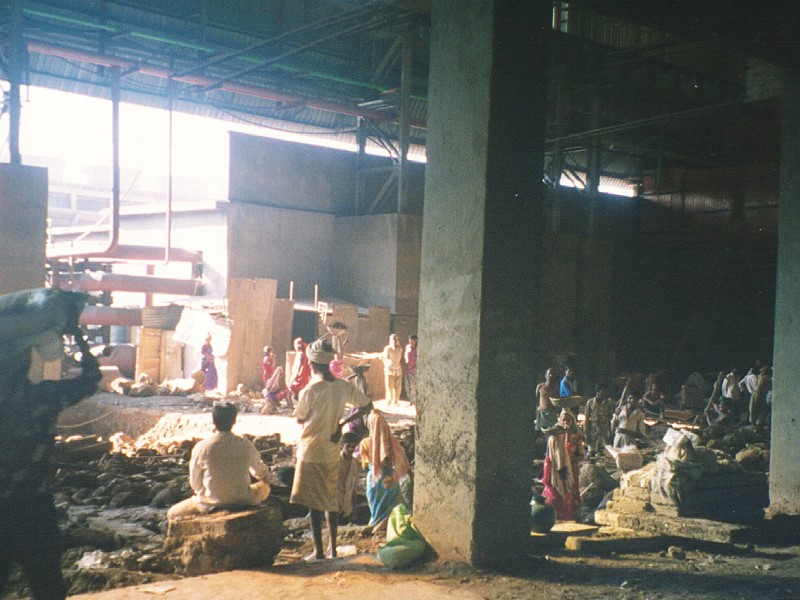 Constructing a high-tech marvel by hand, using hand tools and a lot of gypsies.

If anyone forces you to go one mile, go with them two miles.  Give to the one who asks you, and do not turn away from the one who wants to borrow from you.

“Our Lord’s teaching can be summed up in this: the relationship that He demands for us is an impossible one unless He has done a supernatural work in us. Jesus Christ demands that His disciple does not allow even the slightest trace of resentment in his heart when faced with tyranny and injustice. No amount of enthusiasm will ever stand up to the strain that Jesus Christ will put upon His servant. Only one thing will bear the strain, and that is a personal relationship with Jesus Christ Himself— a relationship that has been examined, purified, and tested until only one purpose remains and I can truly say, “I am here for God to send me where He will.” Everything else may become blurred, but this relationship with Jesus Christ must never be.
“The Sermon on the Mount is not some unattainable goal; it is a statement of what will happen in me when Jesus Christ has changed my nature by putting His own nature in me. Jesus Christ is the only One who can fulfill the Sermon on the Mount.
“If we are to be disciples of Jesus, we must be made disciples supernaturally. And as long as we consciously maintain the determined purpose to be His disciples, we can be sure that we are not disciples. Jesus says, “You did not choose Me, but I chose you…” (John 15:16). That is the way the grace of God begins. It is a constraint we can never escape; we can disobey it, but we can never start it or produce it ourselves. We are drawn to God by a work of His supernatural grace, and we can never trace back to find where the work began. Our Lord’s making of a disciple is supernatural. He does not build on any natural capacity of ours at all. God does not ask us to do the things that are naturally easy for us— He only asks us to do the things that we are perfectly fit to do through His grace, and that is where the cross we must bear will always come.”

It is said that Romans would pull someone off the street to have them carry the Roman’s belongings.  Note how they quickly conscripted Simon of Cyrene in Luke 23:26 to carry Jesus’ cross.  Once you had gotten their belongings to the end point or travelled a mile, you were relieved of your duties and you could return home, but Jesus said to keep going.  It does two things.  It changes something in the Roman’s attitude toward you and it saves a fellow traveler along the road from being accosted by the Roman.

Rev. Chambers says that all the Sermon on the Mount is attainable.  It may take me my entire lifetime to get there, but in the end, all believers will be completely sanctified.

Some nations of the world are similar to first century Judea, one group oppresses and persecutes another, but there seem to be pockets of lawlessness and bullying everywhere these days.  Yet, there are no conditions on what Jesus says here.  He does not say that we are to go the extra mile if they ask nicely.  In fact, these verses are followed in the Sermon on the Mount with the command to love our enemies.  If anything, Jesus gives us the easy command and then builds upon it.

Since people were accustomed to walking in the time of Jesus, walking four miles, two out and two back, would be possible for most able-bodied folk, but these days, it might be a monumental chore.  And if you live on our hill, it would be easy to walk to the grocery store for some light shopping, but then you not only have groceries to bring home, you have a steep hill to climb.  In Judea, there are a lot of hills and mountains.  The Roman roads were sturdy, but they were not exactly smooth.  And the Romans may have a lot for you to carry.

Who is your Roman who asks a lot from you?  Is there a way to go further than being asked?  I have seen people melt, knowing that they had been unreasonable in their demands, yet they got more, when I went beyond what they demanded.  Others simply growled.  One boss of mine demanded even more the next time, seeing how much I could take before I broke.  But regardless, serving with a smile and doing something beyond the demanded requirement is where Jesus was going with this lesson.  Regardless of the response that you get from the demanding person in your life, Jesus will be pleased when you go the extra mile.