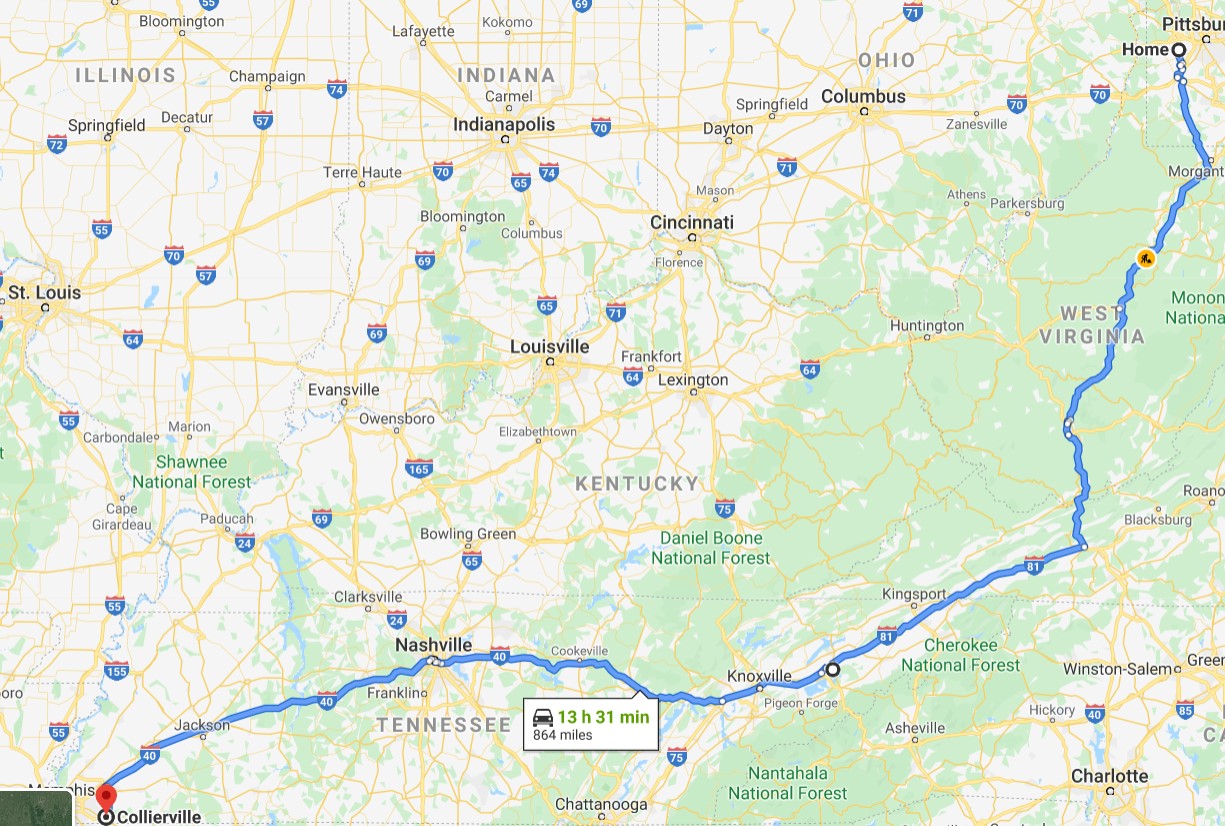 A Google Map Route that I could take, if Kentucky bars out-of-state travel.

When this became known to the Jews and Greeks living in Ephesus, they were all seized with fear, and the name of the Lord Jesus was held in high honor.  Many of those who believed now came and openly confessed what they had done.  A number who had practiced sorcery brought their scrolls together and burned them publicly.  When they calculated the value of the scrolls, the total came to fifty thousand drachmas.  In this way the word of the Lord spread widely and grew in power.
After all this had happened, Paul decided to go to Jerusalem, passing through Macedonia and Achaia.  “After I have been there,” he said, “I must visit Rome also.”  He sent two of his helpers, Timothy and Erastus, to Macedonia, while he stayed in the province of Asia a little longer.

When Paul had finished speaking, he knelt down with all of them and prayed.  They all wept as they embraced him and kissed him.  What grieved them most was his statement that they would never see his face again.  Then they accompanied him to the ship.

After sighting Cyprus and passing to the south of it, we sailed on to Syria.  We landed at Tyre, where our ship was to unload its cargo.  We sought out the disciples there and stayed with them seven days.  Through the Spirit they urged Paul not to go on to Jerusalem.

After we had been there a number of days, a prophet named Agabus came down from Judea.  Coming over to us, he took Paul’s belt, tied his own hands and feet with it and said, “The Holy Spirit says, ‘In this way the Jewish leaders in Jerusalem will bind the owner of this belt and will hand him over to the Gentiles.’”

This quiz is the natural follow up to two quizzes, the first two mission journeys of Paul.  The first quiz simply had a chronological list of the towns/cities that were mentioned in Acts.  The second of these quizzes had a quiz within a quiz.  This third quiz is a single quiz in four sections, or four quizzes, three of which are fairly short.  These sections are: the route in two parts, the people, and the events.

In the first section, list the regions in which Paul visited, first letter provided.  Paul returned to two of these regions on his return trip, but the regions are listed only once each.  Note that these regions were made up of many churches that were established in his first and second mission trips.  If you go to the maps of these mission trips, the cities will be shown, but few cities are mentioned until Paul goes to Ephesus.  At that point, Paul gets the call to go to Jerusalem, but he had not yet checked on the other churches.  His trip to Jerusalem then takes him to other regions.

In the second section, list the cities or islands where Paul travelled, by boat or by land, from the first port after Macedonia to the arrival in Jerusalem, first letter provided.

In the third section, list the mission team members, first letter or two provided.  There is one team member that is inferred only by pronoun.

In the fourth section, answer the questions regarding key events along the trip.

The seven sons of Sceva used sorcery, but the name of Jesus.  The result from this incident caused the locals who practiced sorcery to burn their scrolls publicly.  The scrolls were worth a great deal of money, but they feared the power of Jesus.

The Ephesus riot, as was Paul and Silas’ imprisonment in the second mission trip, was motivated by money.  The leader of the riot rightly determined that a mass conversion of the Ephesians to Christianity would put him out of business (a bit of a hint).

Since Luke is writing this and Luke is a doctor, he knew that the dead person was actually dead, although Paul only states that he is alive, not that he had come back to life.  This is in line with Jesus raising Jairus’ daughter, and for similar reasons.  Jesus did not want everyone going into a frenzy over his raising someone from the dead too early in his ministry and Paul did not want to give these people the idea that he (Paul) could raise people from the dead – leaving the focus on Jesus.

For question 7, this town is very important in the history of philosophy.  Thales was from there and a school of philosophy was established there.  Pythagoras was born there and probably attended that school.

I chose the four Scriptures for a specific reason, that could be a standalone post of its own.  In Acts 19, before Paul had hardly started his journey, he feels a call to Jerusalem.  In Acts 20, the elders of Ephesus wept knowing that Paul would probably never return.  In Acts 21, we have a group of believers in Tyre (hint to an answer) that “in the Spirit” told Paul not to go to Jerusalem.  And then the prophet Agabus says that Paul will be arrested and given over to the Gentiles.

Paul had many warnings that he should not go to Jerusalem.  Could it be that if he had gone to Ephesus that the outpouring of love would have changed his mind?  Besides, he might get to Jerusalem too late for the religious festival.  God’s will for our lives is not always, and quite often never is, the easy road.  Were the warnings admonition that God’s perfect plan was a different route?  Or were the warnings a test of Paul’s resolve, to ensure that Paul was prepared for the hardship that would soon await him?

From the number of times that you see these mission team members mentioned, you get the idea that many of them became important in Paul’s work.  Sometimes they were used as messengers.  Trophimus is falsely accused as going with Paul into the temple and the other reference is in 2 Timothy where it is announced that Trophimus is sick.  So, this could be an early prayer request.

Since you did so well, enjoy this 12 minute journey as a review, with the narrator adding a few key details, and differing from the book of Acts only in a couple of minor details.  Hopefully, you can catch the differences.