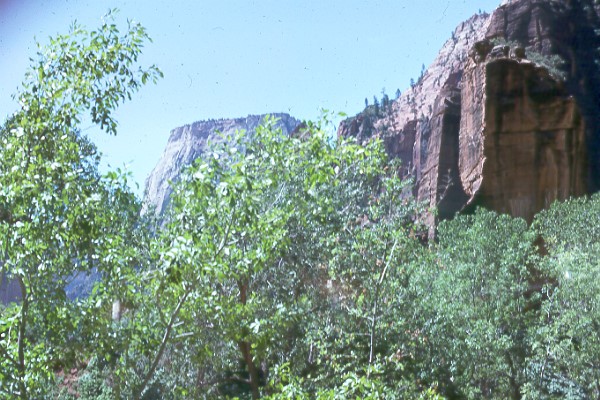 I think that the gray mountain to the left center of the photo is the Great White Throne. It is obscured by trees at the entrance of the Narrows, behind the photographer in the photo. These would be marvelous rocks to rappel down, if you had enough rope...

“Vanity of vanities,” says the Preacher;
“Vanity of vanities, all is vanity.”
What profit has a man from all his labor
In which he toils under the sun?
One generation passes away, and another generation comes;
But the earth abides forever.
The sun also rises, and the sun goes down,
And hastens to the place where it arose.
The wind goes toward the south,
And turns around to the north;
The wind whirls about continually,
And comes again on its circuit.
All the rivers run into the sea,
Yet the sea is not full;
To the place from which the rivers come,
There they return again.
All things are full of labor;
Man cannot express it.
The eye is not satisfied with seeing,
Nor the ear filled with hearing.

[On sensitive people who are easily hurt:] “Vanity is usually the real trouble.”

“Vanity works on a weak head, produces every sort of mischief.”

“Vanity is the quicksand of reason.”

I think we all knew it.

What is wrong with the world today?

Why did Rev. David Robertson have a series of messages from the cathedral in Sydney, Australia, choosing Ecclesiastes as the text?

In the NIV it is “meaningless”, but in the KJV, including updates, it is “vanity.”

You might say this.  Vanity is pride on steroids.

And as the quotes above suggest, the average person in the world today, especially the below average among the secular crowd has achieved vanity on steroids.  We have lost common sense and wisdom.  We are sinking in quicksand and have no clue that we are sinking.  And we are hypersensitive, even finding harm and hurt when none was intended.

Within the past 25 years, I have met 4-5 people, maybe more, who protest loudly that they are smart, but then they betray their stupidity by continuing to talk – mind numbing stupidity.  They were so inept that they would just as likely slam their body into a wall as to use the door.  The one brain cell that they had was too busy keeping the heart and lungs going to do anything else.  Harsh, and a bit of an exaggeration, but not by much.  I have heard a quote attributed to George Carlin, but I doubt it was him.  “The average person in the United States is stupid.  That means that half the people you know are stupider.”  Yet, they protest that they are smart, too much vanity to see the truth.

I once was on a softball team.  I usually played catcher, because I could tell by the stance of the batter where the ball might go.  I could then signal the fielders.  After the other team batted through the lineup, I knew even more.  But for me in the batter’s box, I would have a straight stance and then shift based on where the hole in the infield was.  I almost always only got singles, but my batting average in slow pitch softball was excellent.

In one game, I noticed that the right fielder for the other team could hardly move, walking with a limp, never running, and when his teammate tossed him the ball, he dropped it.  I changed my strategy.  Once the pitch was coming to the plate, I shifted my stance and hit a line drive between the first and second basemen.  I figured that there was no way that I would not get a hit for extra bases.  The bases were loaded, so I was about to get at least a couple of runs-batted-in along with the extra base hit.  But with my luck, I hit the ball straight at the right fielder’s face.  So concentrated on hitting it in that general direction, I could never hit the target more perfectly, and no more perfectly wrong.  He put his glove in front of his face to protect himself, and my line drive went right into the glove for an out, and the inning was over.  No runs were scored.  The right fielder, having never caught a ball all season, turned and hobbled to the fence, wondering where the ball was, not realizing the ball was in his glove.  The center fielder ran over to let him know where the ball was, congratulating him on a great catch.  The small crowd, knowing how inept the right fielder was, was going wild.  In trying to prey on the other team’s weakness, I had given a poor player a memory to last a lifetime.  We still won the game, but I became the joke in our dugout for the rest of the season.  “Don’t hit the ball to right field!”

Why do I relate this old memory?  Did the inept right fielder go to the dugout bragging about being the greatest softball player of all time?  All he did was instinctively protect his face and the rest happened without effort, without him even knowing, but that is the way most people live their lives these days.  They do not think.  They do not work hard, if they work at all, and some of those non-workers collect paychecks.  They luck out once in a blue moon and then call themselves the greatest.  Vanity of vanities.

I know that I am a sinner that has been saved by the Grace of God.  I owe nothing to my abilities.  My intellect has often been my downfall, making me think that I can do this little task alone.  Recently as I am having some structural issues, I cannot be assured each morning if putting on my socks will be easy or hard to do.  I rely on God to give me the strength, and sometimes the fortitude to press through the pain, just to do easy tasks.  And the doctors argue whether it is a meniscus problem, a tendonitis problem, or simply arthritis.  I vote for all of the above, but when writing multiple choice questions for a living, I learned that is a sloppy way to write a question.

But I have had many times in my life when I have had to pretend to have all the answers to all the questions.  As an Army officer, my word was law, but I preferred to consult with my sergeants who knew a lot more than I did before I opened my mouth.  As a father, I had to make quick decisions and stand by them.  My sons needed a rock that they could rely upon.  Maybe I should have been more like sandstone than granite, a little softer on occasion.  Maybe I got that a bit wrong.

As an industrial instructor, I portrayed myself as the ultimate expert with ease.  But there was one part of the Bricmont Method that I did not mention in my post on the Bricmont Method.  I could choose to answer the question right away, but we had an unanswered question board for questions that would be answered later in the presentation.  When you will need to teach two hours of material so that the answer makes sense, the unanswered questions board is a must.  It keeps the instructor obligated to address the question, another must.  But what if the instructor has no clue how to answer the question?  That is one of the reasons to have a break once each hour.  The smokers are getting the shakes.  The people who have drunk the mega-cup of coffee need to go.  And the instructor needs to call the office so that the head of engineering can pool every engineer in the building until the answer has been discovered.  Thus, the instructor answers the question a couple of hours later, looking like a genius.  After 2-3 years, there were few questions that I had not heard before, and I became the person on speed dial.  A few times I was called in the middle of the night, by people in India or China, after the steel mill had a strange thing happen.  I usually prefaced my remarks with “I don’t know for sure because I am not there to see it myself, but I think …”  When they did not call back during normal USA business hours, it meant I was right.  But when I wasn’t right, it usually meant one of our engineers had to fly over there to fix a problem.  Odd that they did not call the engineer that designed the equipment, but they called their instructor.  It would be easy to use that as an excuse for vanity.  I took it as a noble obligation to help those who trusted me.

While the world has gone insane, listening to vanity of vanities, instead of truth, reason, and common sense, we need to know the difference.  We need to know God, the Truth.  God is the Rock that we can build upon.  We can see God in everything, but we can know God from His Word, the Bible.  We can pray and God can speak to us.

And still, the NIV word may reign supreme, for this is a fallen world.

All is meaningless?  But no, with God in our hearts, this world is simply a training ground for the meaningful world to come when we are with Jesus forever.