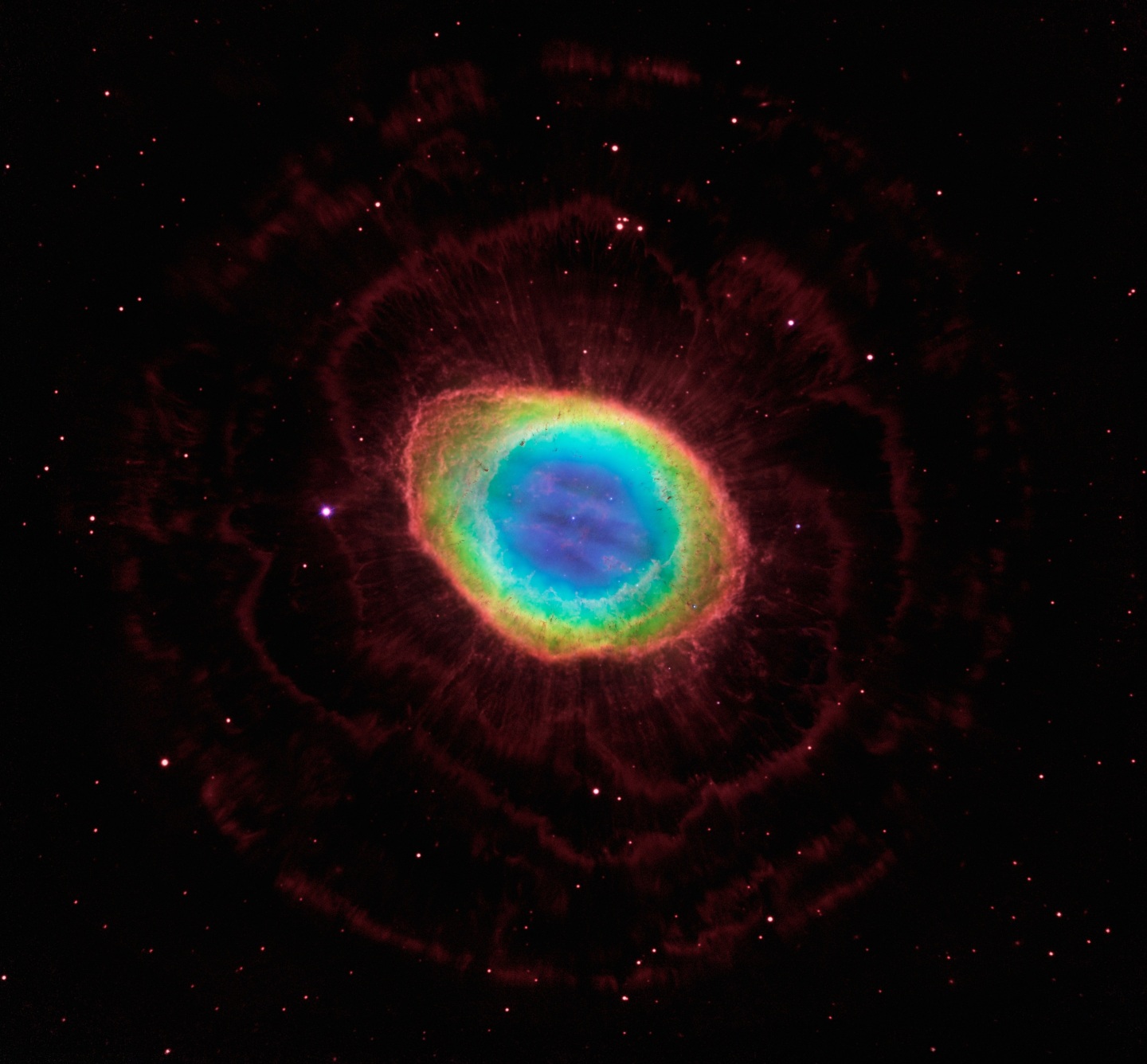 Helix nebula (NGC 7293), otherwise known as "The Eye of God." Photo by permission from pxhere.com

Now the serpent was more crafty than any of the wild animals the Lord God had made. He said to the woman, “Did God really say, ‘You must not eat from any tree in the garden’?”
The woman said to the serpent, “We may eat fruit from the trees in the garden, but God did say, ‘You must not eat fruit from the tree that is in the middle of the garden, and you must not touch it, or you will die.’”
“You will not certainly die,” the serpent said to the woman.  “For God knows that when you eat from it your eyes will be opened, and you will be like God, knowing good and evil.”
When the woman saw that the fruit of the tree was good for food and pleasing to the eye, and also desirable for gaining wisdom, she took some and ate it.  She also gave some to her husband, who was with her, and he ate it.  Then the eyes of both of them were opened, and they realized they were naked; so they sewed fig leaves together and made coverings for themselves.

Jesus said, “My kingdom is not of this world.  If it were, my servants would fight to prevent my arrest by the Jewish leaders.  But now my kingdom is from another place.”

“Atheism may be defined as the mental attitude which unreservedly accepts the supremacy of reason and aims at establishing a lifestyle and ethical outlook verifiable by experience and the scientific method, independent of all arbitrary assumptions of authority and creeds.”

The secular progressive movement, to many, has sprung forth from some horrid, disease infested swamp, seemingly out of thin air.  Of course, many theologians will say that the movement is not progressive, but regressive.

For a couple of months, my brain has been spinning, thinking about the origins of the world’s trend of doing, as Os Guinness has said, “Anything But Christianity (ABC)”.

The downward spiral in the USA seems to have started with Madalyn Murray O’Hair.  She successfully got the supreme court to make one of the worst decisions that the court has ever made.  The first amendment prevents establishing a state religion.  Many countries in Europe require you to join one religion or another, paying your tithe to the government for the maintenance of the church.  In return, you get to be buried in the church cemetery.  Thomas Jefferson did not want the US government to dictate to the churches on how to worship and who keeps the money in the offering plate.  But the Supreme Court decided that there was no place in the government for God.  And those words, or some very close to them, have been said by members of the Democratic party within the last few years.

But others may point to Charles Darwin.  His theories regarding the origins of life on earth, today all but totally disproven, mark a vast change in what some call science.  But there are two problems with that.  Darwin’s “science” is wishful thinking at best, and Darwin’s ideas piggybacked off Charles Lyell who wrote a book on Geology, stating that rocks were millions of years old.  Again, wishful thinking.  Lyell’s work has been greatly praised, but there are at least three things wrong with it (oh so many more).  Lyell joined the Geological Society, but he was a lawyer, not a scientist.  Lyell concepts are based on wrong thinking and assumptions.  And Lyell had an agenda, that apparently Darwin agreed with.  He wanted to “free science” from the Biblical narrative.  In other words, disprove a little piece of the Bible and then the entire Bible becomes suspect.

When Madame Curie thought she had discovered rocks containing Uranium that were millions of years old, without ever confirming her findings, the atheists among the scientists quickly dusted off the books of Lyell and Darwin.  They had their “proof.”  Yet, the RATE Team, Radioisotopes and the Age of The Earth, have proven Curie’s estimates are in error and the more likely age of the earth is between 6,000 and 7,000 years, which corresponds closely with the Biblical record.  Yet, the secular world ignores the RATE Team findings, a handy way of putting fingers in ears and saying “la la la” until the people who are speaking the truth go away.  As for Darwin, the modern geneticists will tell you, those that are truthful, that the mutations (not evolution at all) in the human gene can only support about 6,000 years or so of mutations.  It is amusing how they date those mutations back to two people, “y chromosome Adam and mitochondrial Eve.”

But then going back further, you have the doubters like Voltaire, who question whether anything is true or not.  Does that sound familiar?  There is a television show where an interviewer goes onto college campuses and asks questions.  The students vehemently state that there is absolutely nothing that is objectively true – which means they just contradicted themselves.  Even Voltaire did not go that far.  He just said that he felt no one could prove if anything was objectively true other than a few mathematical concepts.  Thank heavens he did not doubt the “two plus two thing.”

The truth of O’Hair’s quote above is that it is impossible.  For if we created a society totally separated from any belief in God, we get the anarchy that we have in many places on this earth today.  Even Ms. O’Hair learned of the flaw in her statement, but too late. For her atheist organization, she hired an ex-con who had committed murder at a young age. He stole $54,000 from the organization, but he knew there was more. He kidnapped O’Hair, one of her sons, and her granddaughter and forced the son to empty to accounts. The criminal then killed his captives. When he was convicted of the murders, he let the authorities know where the bodies were buried. Creating a moral system without God is not possible. For it is God’s imprint upon us that gives us that inner feeling of what is good and bad.  We get that small voice in our head, that change in our make-up, possibly embedded in our RNA that first entered when Adam and Eve ate of the fruit.  With that, we gained a sin nature also.

And even then, before that, the serpent lied to Eve.  Satan, in the form of a serpent, tempted Eve as he tempted such thinkers as Voltaire, Lyell, and Darwin.  And Satan still works within those in power today who wish to remove the thought of God from government, from our schools, and from the minds of all citizens.  All those modern world leaders think they came up with their ideas out of thin air. They have no idea that they are puppets on the strings. All of this is Satan’s End Game.

But Satan has already lost.  Jesus Christ paid the penalty for our sins.  We can do nothing, but receive that gift, trusting and believing in Jesus.  Beyond the quoted Scripture from Genesis, Jesus may have had His heal struck by the serpent, but Jesus crushed the serpents head when He died for our sins and then rose from the dead on Sunday morning.