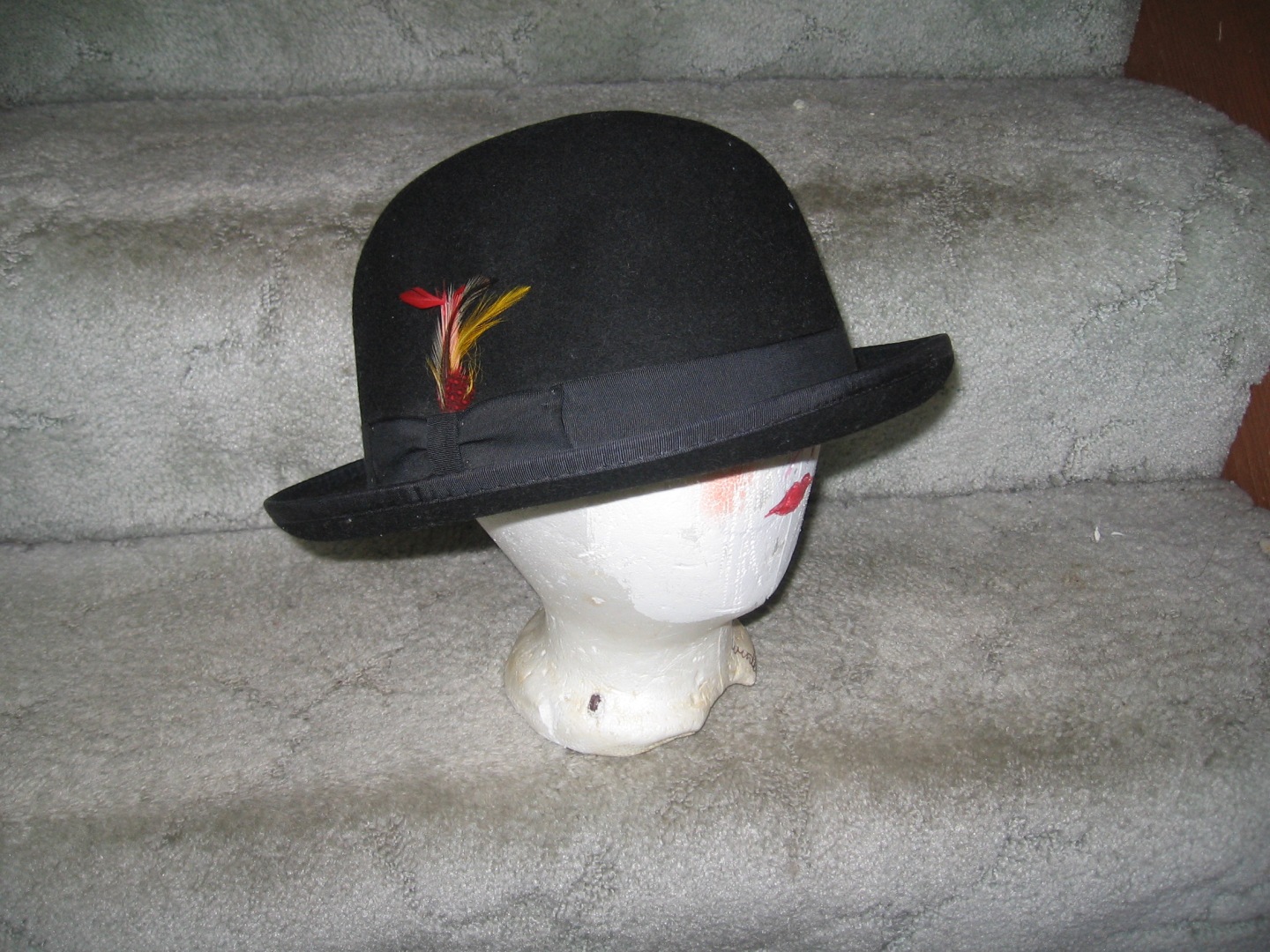 Bowler, purchased in Old Sacramento market - a little too large for the model

David praised the Lord in the presence of the whole assembly, saying,
“Praise be to you, Lord,
the God of our father Israel,
from everlasting to everlasting.
Yours, Lord, is the greatness and the power
and the glory and the majesty and the splendor,
for everything in heaven and earth is yours.
Yours, Lord, is the kingdom;
you are exalted as head over all.
Wealth and honor come from you;
you are the ruler of all things.
In your hands are strength and power
to exalt and give strength to all.
Now, our God, we give you thanks,
and praise your glorious name.
“But who am I, and who are my people, that we should be able to give as generously as this?  Everything comes from you, and we have given you only what comes from your hand.  We are foreigners and strangers in your sight, as were all our ancestors.  Our days on earth are like a shadow, without hope.  Lord our God, all this abundance that we have provided for building you a temple for your Holy Name comes from your hand, and all of it belongs to you.  I know, my God, that you test the heart and are pleased with integrity.  All these things I have given willingly and with honest intent.  And now I have seen with joy how willingly your people who are here have given to you.  Lord, the God of our fathers Abraham, Isaac and Israel, keep these desires and thoughts in the hearts of your people forever, and keep their hearts loyal to you.  And give my son Solomon the wholehearted devotion to keep your commands, statutes and decrees and to do everything to build the palatial structure for which I have provided.”

“Many a disaffected person cries ‘It’s not my fault … blame society!’ n But the meaning of the word ‘society’ is not entirely clear, and it has changed over time.  During the 18th century, when the Irish philosopher and statesman Edmund Burke was writing, Europe was becoming increasingly commercialized, and the idea that society is a mutual agreement between its members – like a commercial company – was readily understood.  However, this point of view also implies that if is only the material things in life that matter.  Burke attempts to redress the balance by reminding us that human beings also enrich their lives through science, art, and virtue, and that while society is indeed a contract or partnership, it is not simply concerned with economics, or, as he puts it, ‘gross animal existence.’  Society embodies the common good (our agreement on customs, norms, and values), but for Burke ‘society’ means more than just the people living now – it also includes our ancestors and descendants.  Moreover, because every political constitution is part of ‘the great primeval contract of eternal society’, God himself is society’s ultimate guarantor.”

Pardon me while I go down a strange rabbit hole.  When I read about Edmund Burke and anything to do with political philosophy, meaning at some point, the “law,” my mind goes to Burke’s Law.

But whenever I think of Gene Barry, I think of Bat Masterson.  This video, less than 4 minutes, starts with the intro and ends with the theme song sung during the closing credits.  I have the derby hat and a cane, but not a Bat Masterson cane.  Hmmmm.

This trip down memory lane may lead to another post.  What was your favorite 50-60s TV Western?  I could name a few.  There were many, and oh, how times have changed.

Now that my trip down memory lane is over, let’s get down to Edmund Burke’s idea.  He follows in George Berkeley fashion in that he inserts God as a guarantor, but not as an afterthought.  Burke realizes that a society of the common good cannot survive without God as a guarantor of virtue, norms, and values.  Burke recognized original sin, the sin nature of each of us.  It was at the core of his philosophy.

Notice the Scripture above. If Israel could have kept that psalm of praise as their focus, Israel would have been the greatest nation on earth, but the sin nature overcame them, from rulers to peasants.

Burke asserted that to stay true to our ancestors, we need tradition.  Tradition also includes the moral compass.  Burke felt that our tendency to become corrupt, if change was needed, it must be slowly developed while holding to our moral code and tradition.  The roots of his philosophy mark much of conservative thought since then.  Burke condemned the French Revolution because they made a complete rejection of the past.  And this, in many ways, led to chaos.  Those that see the world today as being in chaos can point to the same things: rejection of our moral code and too much change at once without a clear direction.  Yet, it may be quite a clear direction to the evil puppet master behind the curtain.  Burke wished for a sustainable society, slowly progressing toward the future without losing our moral roots.

Chaos breaks down society, and you have no control over what will emerge.

I think that Burke would like C. S. Lewis, at least when Lewis speaks of change without continuity being madness.  Change happens, but with understanding the roots of the society, there should be some common ground.  But too much change, too quickly, and it is as if a giant plow ripped the earth, and all the roots are gone.

Once we make a clean break from God, our guarantor of virtue and a moral society, and the Bible, where the basic laws can be found, we have no roots upon which we can build a just and proper society of the common good.  It will break down into everyone for themselves, and it already has in much of our society.