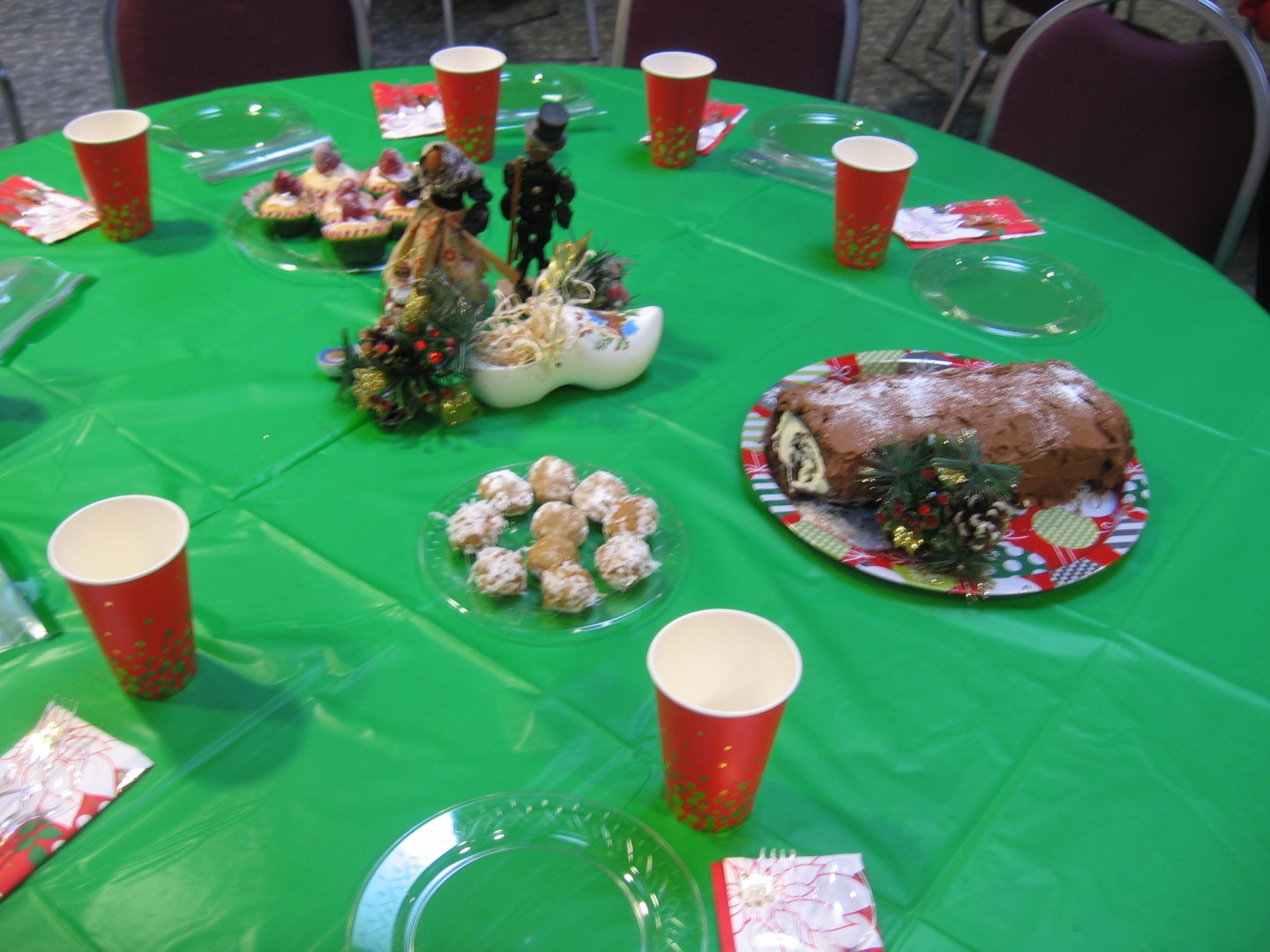 Hiding behind the centerpiece of holly is a small replica of Sinterklaas. The tea cakes are in the background and the orange balls are in the foreground with the Buche de Noel to the right. The tall figures behind the wooden shoe full of straw (for Sinterklaas' white horse) are the German prune people.

Through Jesus, therefore, let us continually offer to God a sacrifice of praise—the fruit of lips that openly profess his name. And do not forget to do good and to share with others, for with such sacrifices God is pleased.

Be diligent in these matters; give yourself wholly to them, so that everyone may see your progress.

“Jesus knew that one of the real tests of our yieldedness to God is our willingness to share with others. If we have no mercy toward others, that is one proof that we have never experienced God’s mercy. Emerson must have been reading the gauge of human mercy when he said, ‘What you are speaks so loud that I cannot hear what you say.’ Satan does not care how much you theorize about Christianity, or how much you profess to know Christ. What he opposes vigorously is the way you live Christ. Some time ago a lady wrote and said, ‘I am 65 years old. My children are all married, my husband is dead, and I am one of the loneliest people in all the world.’ It was suggested to her that she find a way of sharing her religious faith and her material goods with those around her. She wrote a few weeks later and said, ‘I am the happiest woman in town. I have found a new joy and happiness in sharing with others.’ That’s exactly what Jesus promised!”

I have been reminded lately of a series of sketches in Rowan and Martin’s Laugh In, a television show in the late 1960s and early 1970s.  They feature Robin Hood.  Being comedy sketches, something always goes wrong, but being a series of sketches, the ultimate end is that Robin Hood actually does it right.  There is a fake forest scene in camera view on the sound stage.  The rich man is walking through the “forest.”  Robin Hood jumps out from behind a tree.  “Give me your money,” he says.  The rich man hands him a pouch, supposedly filled with riches.  The rich man begins to cry, “Why do you steal money, you ruffian?”  Robin Hood replies, “I am Robin Hood.  I steal from the rich, and I give to the poor.  That’s what I do.”  The rich man bends down low with his head in his hands, beginning to sob, “But now you have stolen all that I have.  I am penniless.”  Then Robin Hood says, “Oh, okay, here!” and he hands him his money back. (Note: I did not put that in bold and italics, since I am trying to quote from long ago memories.)

The point of that old joke is that it is tough, mentally, to live on a fixed income.  What if you do not have much money set aside?  There used to be a television commercial about some investment banker where everyone was carrying these huge numbers around with them.  Then someone asks about the numbers, and he/she is told that the number is the target that they need to invest, set aside from their earnings, in order to retire.  None of these numbers were less than the total amount of money that I ever earned in my entire career.  Drop two or three digits off those numbers and it is the most money that I have ever seen.  Note: I said “seen” in that it was not my money.

But you can exist with a few digits of savings less than that if you are frugal and you have no unexpected expenses.  And you have enough social security coming in, based on how much you were making when you retired.  If my former employer had not given me a sizable severance check that was considered “normal income,” my wife and I would have been in a cardboard box under a bridge a long time ago.  That severance check affected the social security amount that I receive each month.

So, when we hand the loose bills in my wife’s purse or my wallet to a homeless guy.  He now has the money and we do not.  But the homeless guy is not a benevolent Robin Hood (the one from a comedy sketch) that will give the money back.

I also remember a stand-up comedian that ranted about seeing a person panhandling.  The comedian’s rant was about how this panhandler had nothing, but in having nothing, he had no bills to pay.  The comedian might have a few dollars in his pocket, but considering how much debt he was in, the panhandler, who had no debt, was actually ahead of the game.  He said, “This guy is even!!  I’m in the hole!!!”

Praise the Lord, we have eliminated our debt and we pay the total amount when we get a credit card bill.  I am writing a lot of “notes:” today.  Note: We have automatic payments made by one credit card (consolidating a few bills) and we use another on trips.  Otherwise, we would never use them.

My wife and I handed out Valentine’s Day cards to those who were in class on 13 February, the day before the holiday.  If it had been in the middle of the week, it might have just been a mention, but the day before?  We thought it would be a way of showing our love and appreciation for their attendance and participation.  We had heart shaped candies as well.  We easily worked that into our meager budget.

The point is that when we are willing to give, God helps us find a way.  We do not put money in the offering plate as much as we did in the past, but we have purchased the study guide books recently for our next Sunday school study rather than the church pay for them.  We may get a few donations in return to defray some of the cost, but my wife and I will gladly spend our last dollar if it means spreading God’s Word.

You do what you can, but the key is to not worry about how that effort on your part, that sacrifice in that there is no normal means of that sacrifice, will be rewarded in return in this life.

We simply let go.  We give of what we are capable in giving: time, talents, abilities, thoughts/ideas/wisdom, and money.

And we may become like the widow in Billy Graham’s story, from no hope and joy to being the happiest woman in town.