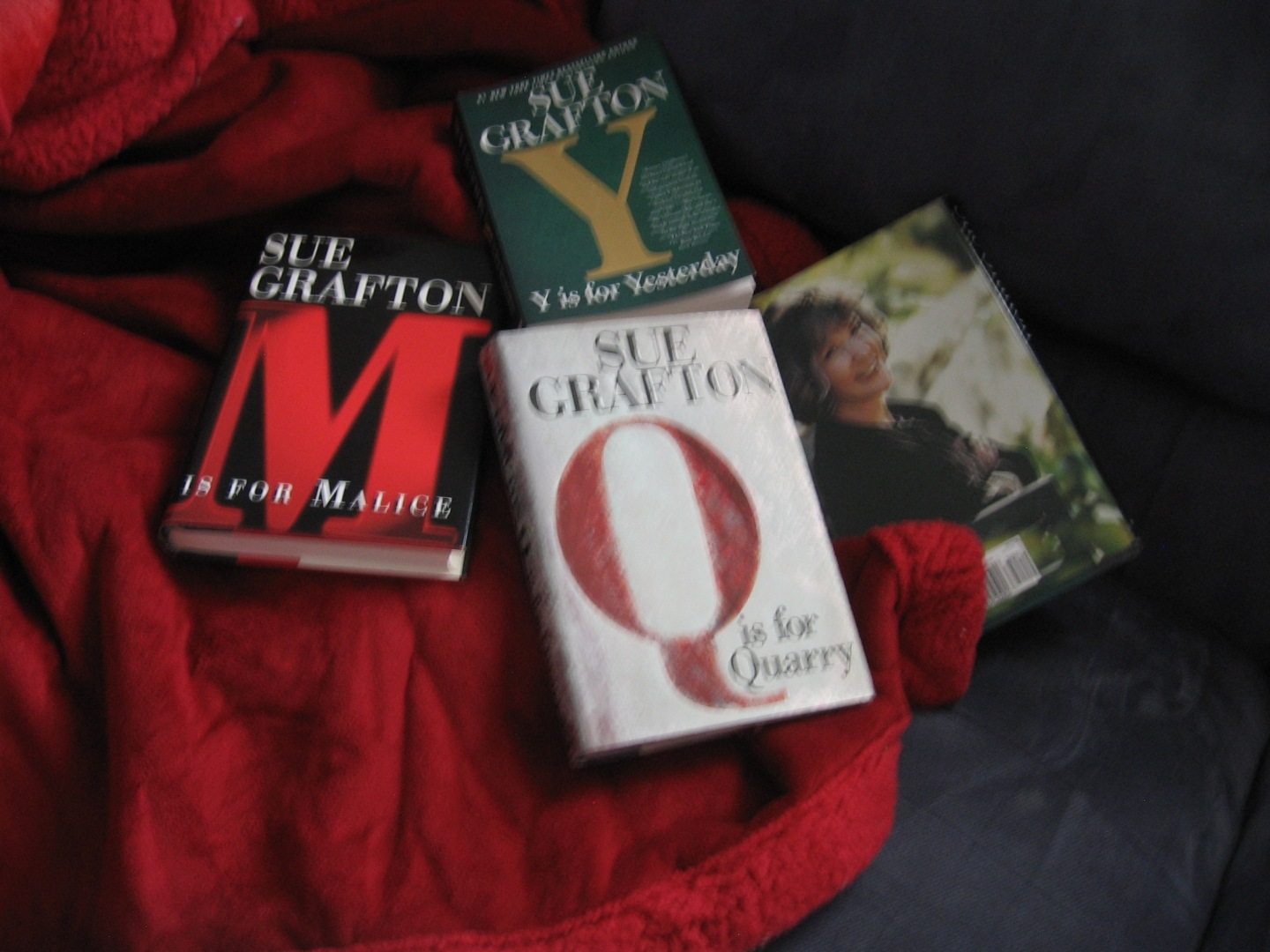 A few Sue Grafton novels. The one featured with a back cover is O is for Outlaw. Her last was Y is for Yesterday (in the photo).

He went on to tell the people this parable: “A man planted a vineyard, rented it to some farmers and went away for a long time. At harvest time he sent a servant to the tenants so they would give him some of the fruit of the vineyard. But the tenants beat him and sent him away empty-handed. He sent another servant, but that one also they beat and treated shamefully and sent away empty-handed. He sent still a third, and they wounded him and threw him out.
“Then the owner of the vineyard said, ‘What shall I do? I will send my son, whom I love; perhaps they will respect him.’
“But when the tenants saw him, they talked the matter over. ‘This is the heir,’ they said. ‘Let’s kill him, and the inheritance will be ours.’ So they threw him out of the vineyard and killed him.
“What then will the owner of the vineyard do to them? He will come and kill those tenants and give the vineyard to others.”
When the people heard this, they said, “God forbid!”
Jesus looked directly at them and asked, “Then what is the meaning of that which is written:
“‘The stone the builders rejected
has become the cornerstone’?
Everyone who falls on that stone will be broken to pieces; anyone on whom it falls will be crushed.”
The teachers of the law and the chief priests looked for a way to arrest him immediately, because they knew he had spoken this parable against them. But they were afraid of the people.

“For the kingdom of heaven is like a landowner who went out early in the morning to hire workers for his vineyard. He agreed to pay them a denarius for the day and sent them into his vineyard.
“About nine in the morning he went out and saw others standing in the marketplace doing nothing. He told them, ‘You also go and work in my vineyard, and I will pay you whatever is right.’ So they went.
“He went out again about noon and about three in the afternoon and did the same thing. About five in the afternoon he went out and found still others standing around. He asked them, ‘Why have you been standing here all day long doing nothing?’
“‘Because no one has hired us,’ they answered.
“He said to them, ‘You also go and work in my vineyard.’
“When evening came, the owner of the vineyard said to his foreman, ‘Call the workers and pay them their wages, beginning with the last ones hired and going on to the first.’
“The workers who were hired about five in the afternoon came and each received a denarius. So when those came who were hired first, they expected to receive more. But each one of them also received a denarius. When they received it, they began to grumble against the landowner. These who were hired last worked only one hour,’ they said, ‘and you have made them equal to us who have borne the burden of the work and the heat of the day.’
“But he answered one of them, ‘I am not being unfair to you, friend. Didn’t you agree to work for a denarius? Take your pay and go. I want to give the one who was hired last the same as I gave you. Don’t I have the right to do what I want with my own money? Or are you envious because I am generous?’
“So the last will be first, and the first will be last.”

The two stories above are parables of Jesus.  Are these fictional stories?  In the story of the workers in the vineyard from Matthew 20, Jesus says that the kingdom of heaven is like a landowner…  This could simply be a metaphor, but it is still a fictional story.  In the Luke parable, Luke does not preface the story about a vineyard that is rented, and the tenants turn on everyone who comes to collect the rent, even killing the son of the landowner.

Jesus used these allegories to illustrate what would happen or illustrate how God deals in one situation or another.  In the parable of the sower and the seed, it is thought that there was a sower nearby so that everyone could see what Jesus was saying was true, but they all had difficulty in the story’s interpretation.

I wrote a post, Is Fiction Evil?, back on 15 October 2019.  Then after one of my recent fictional stories of the Deviled Yeggs mysteries, I received a comment for approval.  I eventually sent it to the SPAM folder.  It was incoherent for the most part.  It had no punctuation.  The capitalized letters were all in the wrong place if I was able to group words into something that might be a sentence.  It rambled without structure or context.  It was impossible to add my own punctuation as there might be three verbs in a row.  It was a lengthy comment that likened my post, if I was reading it correctly, to something illegal, with an illegal government, I was a terrorist, an abuser of children, a gang member, a seller of illegal drugs, I used scare tactics and perpetrated fraud …  I have no idea what else.  I could use each noun that was scattered throughout as a story idea.

But the comment bothered me.  Either the person was unhinged already, or I had written something that brought that on.

My story, that she commented on, was about a woman who was thought to be an evil mastermind who was actually a puppet, trapped by her criminal family, and she needed rescue – which was done by the heroes of the story.  It was a story of redemption and salvation (at least in the physical sense).  I never thought that type of story could illicit that response.

I do not intend on stopping my fictional stories.  I really think that I could take most of these stories and apply Biblical truths to them as a Bible Study series – a humorous fictional story with a moral to the story and lessons that we can take with us into the real world out there.  But my wife groans when I mention it.

But if some of my readers get upset when reading a story that is clearly fictional, should I place a warning?  Something like…

“Before reading further, this is a fictional story for your amusement.  If you do not appreciate fiction, you may want to go to a different post.  Here is a link to a philosophy post from last week. …”

I am not making light of the comment.  Some readers are very passionate about what they write, and they can find triggers to that passion in the most innocent of things on the internet.

But am I barking up the wrong tree?  As I asked in the earlier post two and a half years ago, Is Fiction Evil?