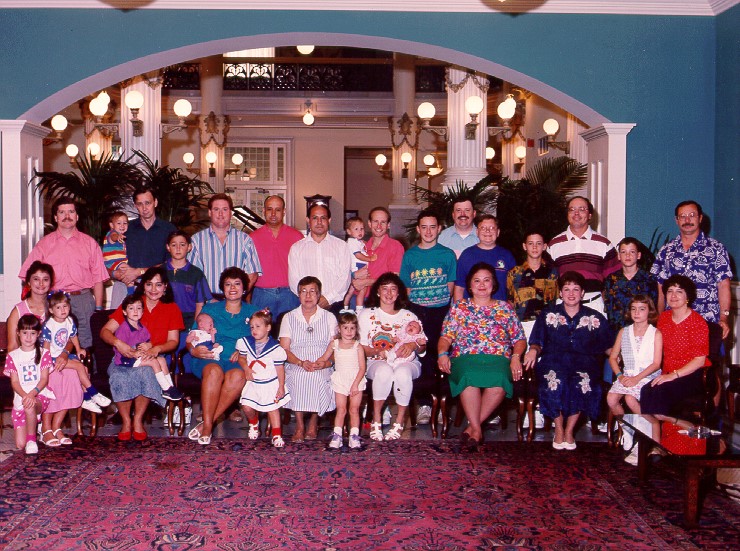 The largest gathering of my wife's family, not counting the gatherings where the small ones in this photo had families of their own. This photo was taken at the Menger Hotel next door to the Alamo in San Antonio, Texas. All nine children and their mother, and only one grandchild was left to be born. Now, there would be great-grandchildren...

Later, Joseph of Arimathea asked Pilate for the body of Jesus. Now Joseph was a disciple of Jesus, but secretly because he feared the Jewish leaders. With Pilate’s permission, he came and took the body away. He was accompanied by Nicodemus, the man who earlier had visited Jesus at night. Nicodemus brought a mixture of myrrh and aloes, about seventy-five pounds. Taking Jesus’ body, the two of them wrapped it, with the spices, in strips of linen. This was in accordance with Jewish burial customs. At the place where Jesus was crucified, there was a garden, and in the garden a new tomb, in which no one had ever been laid. Because it was the Jewish day of Preparation and since the tomb was nearby, they laid Jesus there.

“The longer I live the less I know for sure.
“In my younger years I had a lot more answers than I do now. Things were absolutely black or white, right or wrong, yes or no, in or out—but a lot of that is beginning to change. The more I travel and read and wrestle and think, the less simplistic things seem.
“I now find myself uncomfortable with sweeping generalities, neat little categories, and well-defined classifications. Take people, for example. They cannot be squeezed into pigeon holes.
Not all Episcopalians are liberal.
Not all athletes are thickheaded.
Not all Republicans are Christian good guys.
Not all collegians are rebels.
Not all artists are kooks.
Not all movies are questionable.
Not all questions are answerable.
Not all verses are clear.
Not all deaths are explainable.
“Maybe that list comes as a jolt. Great! Jolts are fine if they make you think. We evangelicals are good at building rigid walls out of dogmatic stones … cemented together by the mortar of tradition.
“We erect these walls in systematic circles—then place within each our oversimplified, ultra-inflexible ‘position.’ Within each fortress we build human machines that are programmed not to think but to say the ‘right’ things and respond the ‘right’ way at any given moment. Our self-concept remains undisturbed and secure since no challenging force is ever allowed over the walls.”

Wow!  What a list of “pigeonholes.”  I might have been guilty of thinking a few of them, maybe even saying one or two.  Of course, others could be added.

Presbyterians are not all “frozen chosen.”  This may shock you, but there are some who are not chosen.  But a lot rarer are the ones who are not frozen.

Of course, there is the classic joke: If you want to go fishing with a Baptist friend, you need to do this one thing to protect your beer.  Invite another Baptist.  They will each make sure the other Baptist never touches the alcohol.

The joke is a falsehood, in that I have known Baptists that would drink all your beer while another Baptist was watching.  Because they can always go down the aisle next Sunday and accept Jesus again.

I apologize to all those saved Democrats out there, umm, if there are any.  With God, anything is possible.

But see, if anyone gets angry over that joke or any of Rev. Swindoll’s simplified pigeonholes above, it illustrates his point and mine.

If we overgeneralize and pigeonhole people, let’s avoid the word “prejudice” because people love pigeonholing that word…  We get angry with people we do not even know.  We hate folks we have never met.  And the divisions that are ripping this world apart get wider and wider.  With the division so wide that we cannot throw a stick at the other side, it is too easy to hate them.

But if we get up close, we can see that they have some of the same features that we have.  They breathe air like we do.  They use their eyes to see just like we do (if they and we are both sighted).  Their mouths can be used to smile or frown or look with a confused look on their face, just like we can.

Is it possible to set the issues aside and simply talk?  Rev. Swindoll wrote the book about 25 years ago and the division in the world has gotten exponentially worse.  We cannot answer the phone (unless caller ID shows that it is a known person) without the fear of someone trying to take advantage of us.

There seems to be no safe haven so that we can see someone for the human that they are.  Can we disagree without coming to blows?

Jesus commands us to love one another.  It was not easy when Jesus said that.  The reason for the Scripture above is that no one would have thought that two members of the Sanhedrin, that group of religious leaders who had Jesus crucified, were really followers of Jesus.  Wow!  No one would have guessed that, at least back in those days.

Let us make an attempt to love one another.  It is no easier today to do that than it was in Jesus’ time.  I have felt the slings and arrows in the past.  I will feel them again.  But we must make the effort.