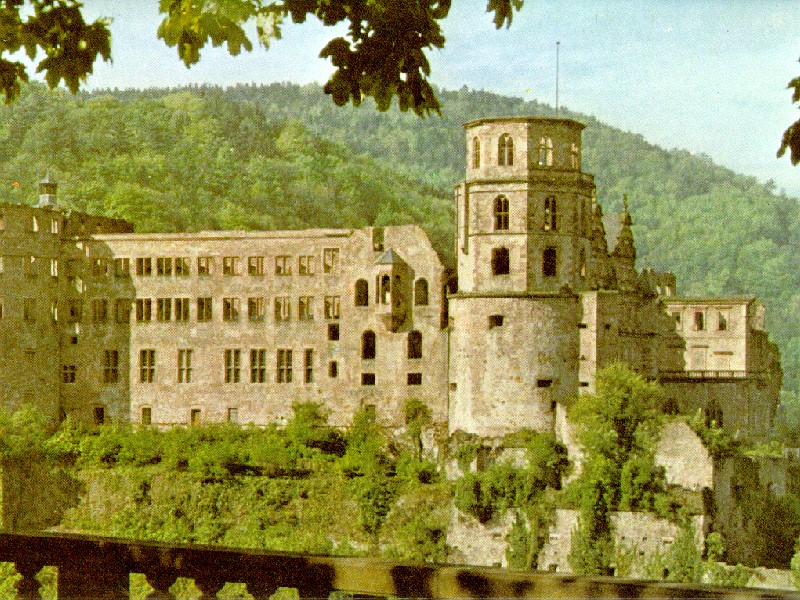 Schloss Heidelberg - a castle ruin that was by-passed by Eisenhower in World War II, since the castle had seen enough of war.

For he chose us in him before the creation of the world to be holy and blameless in his sight. In love…
In him we were also chosen, having been predestined according to the plan of him who works out everything in conformity with the purpose of his will, in order that we, who were the first to put our hope in Christ, might be for the praise of his glory.

Indeed Herod and Pontius Pilate met together with the Gentiles and the people of Israel in this city to conspire against your holy servant Jesus, whom you anointed.  They did what your power and will had decided beforehand should happen.

But the plans of the Lord stand firm forever,
the purposes of his heart through all generations.

For we are God’s handiwork, created in Christ Jesus to do good works, which God prepared in advance for us to do.

What if God, although choosing to show his wrath and make his power known, bore with great patience the objects of his wrath—prepared for destruction? What if he did this to make the riches of his glory known to the objects of his mercy, whom he prepared in advance for glory—…

I am talking to you Gentiles. Inasmuch as I am the apostle to the Gentiles, I take pride in my ministry…

“Q. 7. What are the decrees of God?
“A. The decrees of God are his eternal purpose according to the counsel of his will, whereby for his own glory he has foreordained whatsoever comes to pass. (Eph. 1:11-12)”

“Q. 7. What are the decrees of God?
“A. The decrees of God are his eternal purpose, according to the counsel of his will, whereby, for his own glory, he hath foreordained whatsoever comes to pass.”

“Q. 12. What are the decrees of God?
“A. God’s decrees are the wise, free, and holy acts of the counsel of his will, whereby, from all eternity, he hath, for his own glory, unchangeably foreordained whatsoever comes to pass in time, especially concerning angels and men.”

Notice that I have skipped a couple of questions from the Larger Catechism.  I will skip another question next week, moving to question 14.  Question 13 expands on this week’s topic.  I may go back and cover these questions that expand upon what the Spurgeon Catechism says, but I was wanting to keep these Wednesday evening posts simple.  The shorter and larger catechisms are available online in pdf form.

Some people may consider this topic to be equal or of a greater controversy to last week’s question.  If we do not have a good grasp of Scripture and know who God is, we might, as believers, fall into the controversy trap.  God foreordained whatsoever comes to pass, but we as individuals have a free will.

One of my Bible Study teachers, who was also a pastor, used this example.  If you, as a member of the elect, use your free will to reject God, God will not give up on you and you will eventually accept Him.  Then, you are called to speak to that naughty neighbor next door because God wants Him in His kingdom.  You fail.  You become a coward and refuse to say anything, but God will raise up another believer to talk to that neighbor.  The links in the chain, the building blocks of God’s kingdom, and the broad stroke plans of God will be accomplished, if not by us, by others.

It is horrible that we “love” God, but due to our shortcomings, we require God to have a Plan-B, Plan-C, and so forth.  But I have even seen non-believers do things that looked like they were carrying out God’s plan.  I have had atheists and agnostics taunt me, causing me to take that step of faith in the face of persecution.  If they had left me alone, I might have simply never put my oar in the water and let the current take me through life.

Notice when reading the Gospels, the crowd wished to kill Jesus, but His time had not yet come.  The crowd was just as angry as they were on that first Good Friday, but “something” held them back.  God’s will is happening, and only God the Father knows the day and the hour when Jesus Christ returns.

The following song might not be that easy to sing along with and the term “God’s Will”, on the surface, does not seem to mean what this catechism question is talking about, but it illustrates how God works His wonders in our lives at times.  Be prepared.  It’s kind of a tearjerker, or maybe that’s just me.

His smile was as bright as the August sun
When he looked at me
As he struggled down the driveway, it almost
Made me hurt

[Chorus:]
I’ve been searchin’, wonderin’, thinkin’
Lost and lookin’ all my life
I’ve been wounded, jaded, loved and hated
I’ve wrestled wrong and right
He was a boy without a father
And his mother’s miracle
I’ve been readin’, writin’, prayin’, fightin’
I guess I would be still
Yeah, that was until
I knew God’s Will

Before they moved to California
His mother said, they didn’t think he’d live
And she said each day that I have him, well it’s just
another gift
And I never got to tell her, that the boy
Showed me the truth
In crayon red, on notebook paper, he’d written
Me and God love you

I’ve been searchin’, prayin’, wounded, jaded
I guess I would be still
Yeah that was until…
I met God’s Will on a Halloween night
He was dressed as a bag of leaves”

Dear Lord,
It is reassuring to know that Your Will be done.  That includes those personal promises to those who love You as well as that big picture that will lead to a new heaven and a new earth.  We praise You for being in control.  Many see the chaos in this world today and think that You are not in control, but each step leads those that love to into Your arms.  Thank You.
In thy Name we pray.
Amen