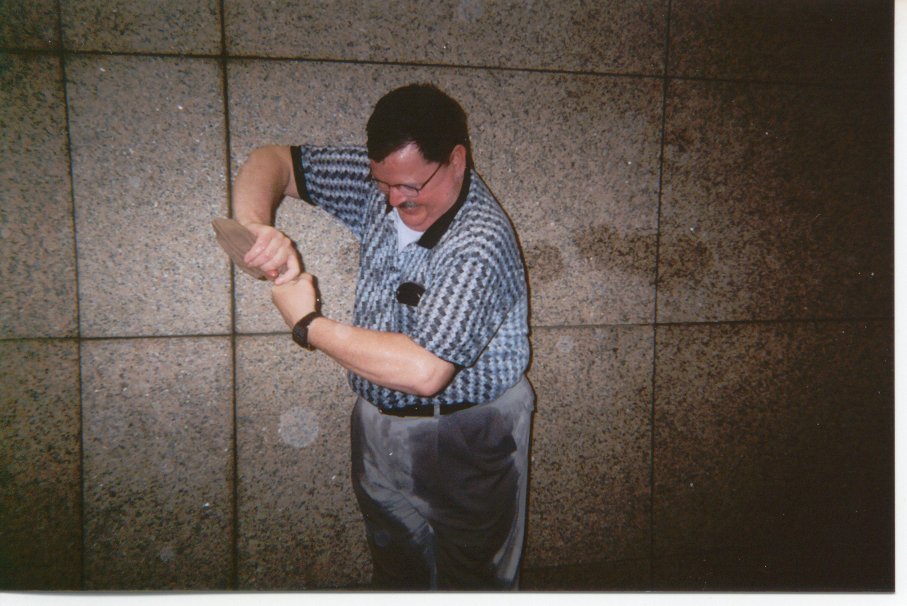 On a sightseeing excursion in Shanghai, a sudden thunderstorm.

In the same way, you who are younger, submit yourselves to your elders. All of you, clothe yourselves with humility toward one another, because,
“God opposes the proud
but shows favor to the humble.”
Humble yourselves, therefore, under God’s mighty hand, that he may lift you up in due time.

You were blameless in your ways
from the day you were created
till wickedness was found in you.
Through your widespread trade
you were filled with violence,
and you sinned.
So I drove you in disgrace from the mount of God,
and I expelled you, guardian cherub,
from among the fiery stones.
Your heart became proud
on account of your beauty,
and you corrupted your wisdom
because of your splendor.
So I threw you to the earth;
I made a spectacle of you before kings.
By your many sins and dishonest trade
you have desecrated your sanctuaries.
So I made a fire come out from you,
and it consumed you,
and I reduced you to ashes on the ground
in the sight of all who were watching.
All the nations who knew you
are appalled at you;
you have come to a horrible end
and will be no more.’”

“I arrived late and discovered that there was only one seat remaining—right in front of the podium where my friend was about to speak. I was not dressed for the occasion of a video recording, but not wanting to miss out, I hustled my way to the last remaining seat and waited for the Bible study to commence. My friend was still getting camera ready in the back while the audience chatted with one another, waiting for it to begin. But no one was talking to me.
“I felt a little uncomfortable but remained seated. A few minutes later, a gentleman came up to me and asked me politely if I would move seats. I said yes, and he ushered me to the back corner of the room. I was actually relieved that I was not front and center, but as I looked down at my outfit and then looked around at all the other ladies (who still weren’t talking to me), it hit me. Oh! I don’t fit in here.
“I was wearing ripped jeans and a leather jacket and my hair was in a tussled topknot. My pride was a little hurt as I sat in silence—though my internal dialogue was having a full-on discussion as to whether I should get up and leave or stay. Of course, because of my love for my friend, I decided to stay and humble myself and remain in the back corner.
“My friend made her way to the podium to begin. As she looked around the room and made eye contact with me, she gasped with excitement and then did something that scared me half to death. She introduced me and asked if I would pray over the Bible study, in front of all these women. They immediately turned to me and welcomed me, even going so far as to clap and cheer. I prayed with all my heart. God whispered to me in that moment that I would never have to prove myself or require any validation from anyone. That as I humbled myself to serve others, He would make a way for me at the appointed time.
“Imagine if my pride had gotten the better of me and I’d started spouting off about who I was and how I knew my friend. That would have been ugly. But as I humbled myself, honored the authority around me, and submitted to the request of doing what others saw fit to do, God spoke on my behalf. I have actually now become wonderful friends with some of the other women who were there, even though we are from different denominations and churches.
“This is a good story, and the principle remains true. Those who humble themselves will be given grace and lifted up at the appointed time. Those who are full of pride will fall down in the long run.
“In humility, Jesus served mankind and died for our sins. Then He was lifted up at the appointed time and made the name that is above every name. He went low, and God lifted Him high. It was never about Jesus becoming famous; it was always about Jesus doing what the Father asked. He was obedient unto death.
“CHALLENGE”
“Ask the Lord to reveal to you if there is any pride in your heart. If there is, repent and choose to humble yourself in the presence of God. When you feel pride rising up or feel the need to be validated, just close your mouth. God will give grace to the humble (1 Peter 5:6). Move in the opposite spirit by honoring those around you and serving them well. Watch God raise you up at the appointed time.”

In Ezekiel’s prophecy against Tyre, he connects their pride eventually with dishonest trade.  This is seen today.  If you think you are wonderful and you can get away with it, you overcharge.  I had a difficult project to estimate.  I explained the situation with my boss, and he agreed.  He negotiated a “cost not to exceed” contract.  One of the unknowns in the contract was the intermediate deadlines.  I had to do most of the work, off the clock, over the weekends.  I worked a lot of hours, but few of them were billable to the customer.  One might argue “slave labor” in that I worked without getting paid for that work.  But near the end of the project, my employer reorganized and I had a new boss.  I told him the agreement that had been established and that we should only charge them about two-thirds of the “cost not to exceed.”  The new boss said that I needed to learn how business was done and even though I had not completed the work, my new boss had already billed the maximum amount.  My employer had gone against an agreement that I was responsible in making, and I was immediately placed on a “watch list” since I was not to be trusted – due to my honesty.

I have often written about pride.  C. S. Lewis said something about how humiliation would not hurt so much if we were humbler. He also wrote about to gain humility, we needed to first admit that we are proud.

Of course, one of my favorite old jokes is the one about the two road construction workers that are taking a break from their hard labor.  One says, “It sure is hot today.”  The other says, “It ain’t the heat that what’s gets you.  It’s the humility!”

With my wife and I, what happened to Alex Seeley is a mirror of an old television commercial starring the baseball announcer, Bob Uecker.  He is sitting in the stands in a seat that he had not paid for.  The usher tells him that he must come with him.  Uecker says to those around him, “Must be on the FRONT row!”  Of course, the next scene shows Uecker in the nosebleed seats, so far away, he can’t see the action on the field.  Every time we find a parking space close to where we are shopping, if I don’t say it, my wife will, “Must be on the FRONT row!”

The point of Uecker’s joke is that we are all a bit proud.  A little humiliation might be in order, but as C. S. Lewis says, it hurts because we are proud.

I have always had a problem interviewing for a job.  I know that others are also interviewing for the position, but I will not misrepresent myself.  And if I ever felt that I had skills far beyond what the other competitors had, it would be nearly impossible to express it.  It would look like pure bragging.  Yet, the other competitors for the job would have no problem making false statements that they are better than they are or they can do things that they know they cannot do.  They’ll make excuses after they have the job.

And I always have a problem with the difference in confidence in my skills and being proud.  I think I crossed that line recently.  I wrote a poor post.  After praying about it, I deleted it.  It was not a good post, but I could have stood by it as what was on my mind at the time.  That would definitely be a proudful response, so the post is no longer online.  With an apology on the next post in that series.

Lord, guide me.  Help me to distinguish between confidence and pride.  Help me to squash the pride while maintaining the confidence necessary to do the best job I can possibly do.  In Thy Name I pray.  Amen