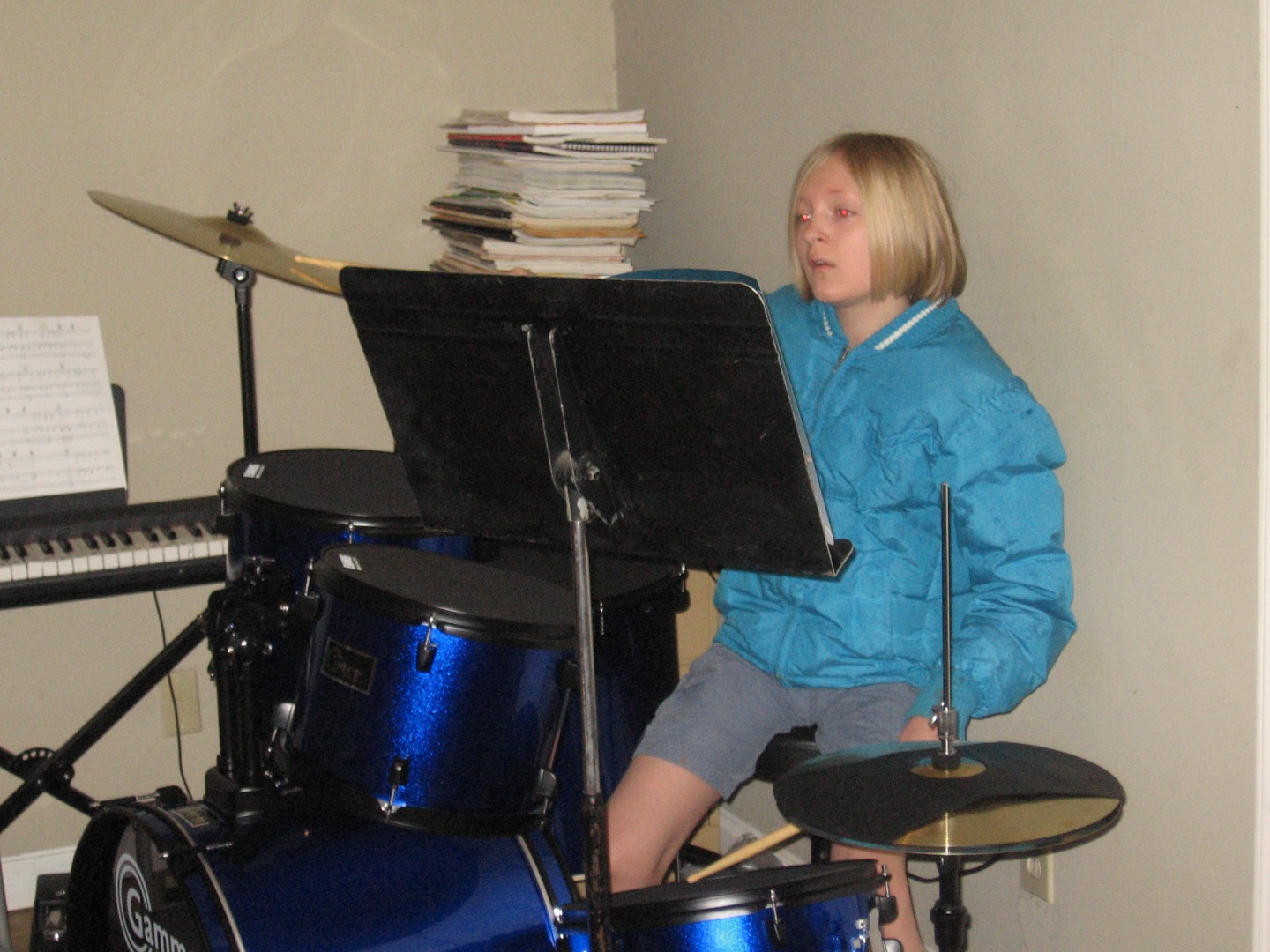 The grandson in the middle, learning how to play drums. He even got a method book

When Jephthah returned to his home in Mizpah, who should come out to meet him but his daughter, dancing to the sound of timbrels! She was an only child. Except for her he had neither son nor daughter.

Zadok the priest took the horn of oil from the sacred tent and anointed Solomon. Then they sounded the trumpet and all the people shouted, “Long live King Solomon!” And all the people went up after him, playing pipes and rejoicing greatly, so that the ground shook with the sound.

David told the leaders of the Levites to appoint their fellow Levites as musicians to make a joyful sound with musical instruments: lyres, harps and cymbals.

I will put an end to your noisy songs, and the music of your harps will be heard no more.

This quiz is about musical instruments, specifically the timbrels, harps, lyres, cymbals, trumpets, pipes, sistrums, and castanets.  We could have multiple quizzes on trumpets alone.  I focused on the other seven, but often when one musical instrument is mentioned, others are also.  Therefore, trumpets filtered into these verses.

Maybe the inspiration for this quiz is twofold.  Yesterday’s Relationship was about Korah’s rebellion.  Korah’s sons, or descendants really, were accomplished musicians and are credited with writing eleven of the psalms.  And in a recent philosophy lesson (essay), a week ago, the philosopher talked about the philosophy of art, and I followed it with a post that afternoon specifically about music.

A timbrel is fairly easy.  It is basically a tambourine.

The sistrum is a clanging device.  Think of an oval on a metal rod with some cross bars loosely attached.  As you shake the rod, the cross pieces will clang against the oval that holds them.  This is thought to be an Egyptian musical instrument.

The castanets may be wood, ivory, or plastic, but they are two concave pieces held in a single hand and tapped together.  Often used today in Spanish traditional dancing.

The harp is used today.  It is often mentioned in the book of Revelation, especially with the 24 elders, but this does not mean we will sit on clouds strumming harps for eternity.  A lyre is basically a U-shaped harp.

While I gravitate toward the bagpipes, the pipe of the Bible is probably any form of reed instrument or flute type instrument.

The trumpets of the Bible were probably any form of what is now made of brass but could easily include animal horns or maybe some seashells.  And cymbals probably were then as they are now.

The longest book of the Bible, at least by chapters, is Psalms.  There are songs peppered throughout the other books of the Bible.  Rev. MacArthur, in his commentary, points out thirteen hymns in the book of Revelation.

And we will all be on key and on time when we get together to sing in Heaven.  It will be wonderful.

Whether you did well on this quiz or, not so well, here is The Fatal Curse of Drink sung by Jon Peterson in his Cohan review.  The words are not the same exactly as they are in an old Irish singing group’s rendition (unable to find a Youtube version), but the original was written by Charlie Case who wrote vaudeville songs that could be put to any tune practically.  The point is to make the delivery so deadpan that the words of the song speak for themselves, regardless of the tune that is used.  In the Irish version, there was a pause before each punchline, which I prefer.  Since a tambourine is mentioned in the lyrics, this was my first choice.

And two of the questions put some lyrics with the music, starting with “He is good.”  Here is the Gaither Vocal Band (my favorite four: David Phelps, Guy Penrod, Mark Lowry, and Bill Gaither), God is Good All the Time.

And thinking of timbrels, here is the London Citadel Timbrels in a 2013 performance.  Of course, the Salvation Army.

And we cannot have (or should that be canna have) a quiz about these particular musical instruments without having the “pipes.”  What better two bagpipe standards for a funeral other than Amazing Grace and Going Home.  Our grandson (not in the video) is only fourteen, but he has been asked to play the pipes at a graveside service and I am sure he will have even more opportunities.