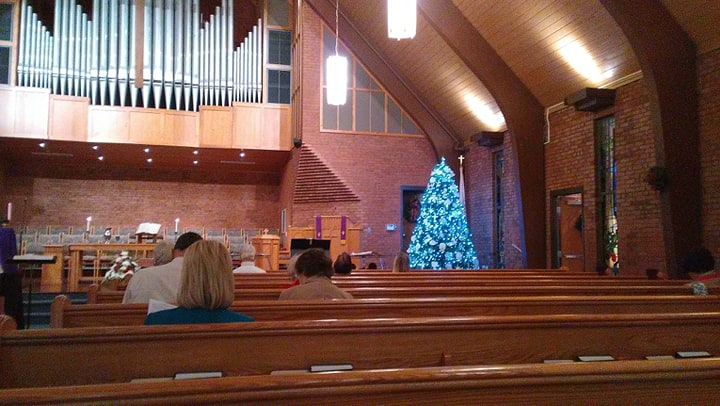 The sanctuary at our church, before the early service. The Chrismon tree near the pulpit contains Chrismons, symbols used to represent the Christ throughout the years (the Cross, the Alpha, the Omega, the Fish, etc.)

When Esther’s words were reported to Mordecai, he sent back this answer: “Do not think that because you are in the king’s house you alone of all the Jews will escape. For if you remain silent at this time, relief and deliverance for the Jews will arise from another place, but you and your father’s family will perish. And who knows but that you have come to your royal position for such a time as this?”

King Xerxes imposed tribute throughout the empire, to its distant shores. And all his acts of power and might, together with a full account of the greatness of Mordecai, whom the king had promoted, are they not written in the book of the annals of the kings of Media and Persia? Mordecai the Jew was second in rank to King Xerxes, preeminent among the Jews, and held in high esteem by his many fellow Jews, because he worked for the good of his people and spoke up for the welfare of all the Jews.

“I had the opportunity to visit the United States Holocaust Memorial Museum in Washington, DC, when I was in the nation’s capital. The moment you enter the building, you can’t help but be swept back in time—to a horrifying time in world history. Not only does the museum tell the wrenching story of the Holocaust, but through leadership-training programs, it helps people in many walks of life to commit to preserving the core value of ﬁghting against hatred and genocide and promoting human dignity.
“The book of Esther relates a story of ethnic hatred that started with one man, Haman, an ofﬁcial in the court of King Xerxes of Persia. At first, Haman’s seething rage was focused on one person—Mordecai, a Jew—but it soon escalated to a plot of annihilating all Jews. Esther, chosen by King Xerxes to be his queen, was Mordecai’s cousin. Through his urging, she courageously uncovered the evil plan to the king and saved the Jewish people.
“When we stop to think about it, our lives could be summarized just like the story of Esther. We were placed where we are for such a time as this. Just as God knew what Esther would face and what the world would be like then, He knows what the world will be like for us and how we can make a difference.
“He requires that we respond to the call of duty on our lives. Indifference is not an option because it is the ﬁrst step toward abdicating our personal and moral responsibility toward others. This call of duty is an innate sense created within us to aid others, to lift them up, and to fan the ﬂicker of hope in them.
“As you leave the main exhibit in the Holocaust Museum, you read the words by Pastor Martin Niemoller:
“In Germany, the Nazis came for the Communists, and I didn’t speak up because I wasn’t a Communist. Then they came for the Jews, and I didn’t speak up because I wasn’t a Jew. Then they came for the trade unionists, and I didn’t speak up because I was a Protestant. Then they came for me, and by that time there was no one left to speak.
“This will never happen again, you say. We know better, don’t we? Take a look around and make sure.
“Your life and mine—for such a time as this.
“< UNCOMMON KEY > Never become indifferent toward people or how you treat them. Instead, consider how you might be able to help them. God may have put you in their paths for such a time as this.”

There is not much that I can add to what Tony Dungy already wrote regarding a major oppressive force.

But what about the bully in the playground or the abusive boss?  What about the subtle political platform that points to the government changing in the wrong direction?

But what about the same thing happening within the church?

I grew up in the Presbyterian church.  I have been a member of four different Presbyterian denominations.  As I grew up, I kept hearing my father and the other elders of the church say that it did not matter what the General Assembly decided, our church would stick to biblical principles.  But when I was in my early thirties, my parents led a movement to switch denominations within Presbyterianism.  The presbytery refused to let them keep their church and they had to build a new one.  In a small town with few Presbyterians, there are two Presbyterian churches.

Oppression is one factor, but breaking down the foundational beliefs of a denomination to the point of apostasy can be just as damaging.

Is it our time to speak?

In the church where we are presently members, each time the General Assembly makes a decision that excites the progressives, more God-fearing Christians within the church leave for any church that is not Presbyterian.  Each time that happens, the biblically minded remaining few gets smaller with less of a voice.

I wrote the title in that manner on purpose.  When there is only one person left speaking the truth, no one will listen.  They will have the force of the crowd on their side.  We must speak while we have the opportunity to be heard.