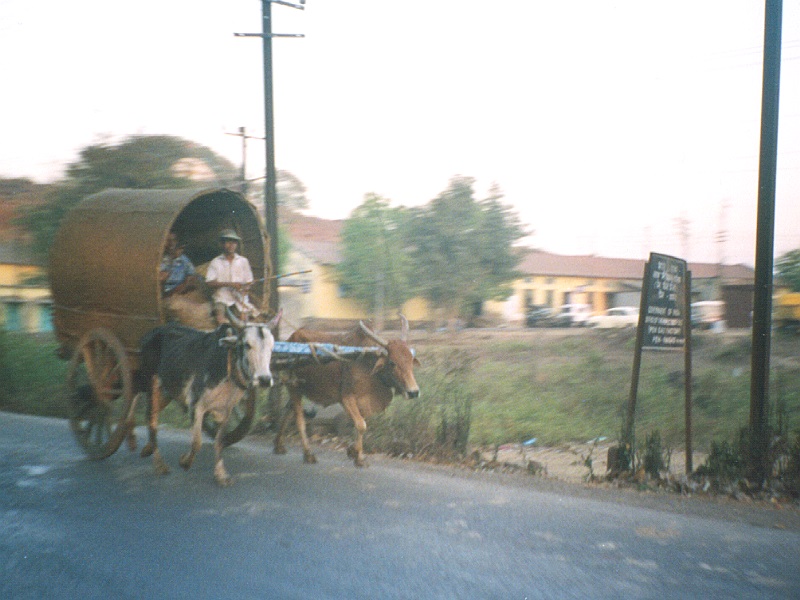 A covered oxcart along the road to the work site in Maharashtra, India in late February 1998. I think near the town of Pen. I called these stylish oxcarts, Conestoga oxcarts.

So Moses took the carts and oxen and gave them to the Levites. He gave two carts and four oxen to the Gershonites, as their work required, and he gave four carts and eight oxen to the Merarites, as their work required. They were all under the direction of Ithamar son of Aaron, the priest. But Moses did not give any to the Kohathites, because they were to carry on their shoulders the holy things, for which they were responsible.

They set the ark of God on a new cart and brought it from the house of Abinadab, which was on the hill. Uzzah and Ahio, sons of Abinadab, were guiding the new cart with the ark of God on it, and Ahio was walking in front of it. David and all Israel were celebrating with all their might before the Lord, with castanets, harps, lyres, timbrels, sistrums and cymbals.
When they came to the threshing floor of Nakon, Uzzah reached out and took hold of the ark of God, because the oxen stumbled. The Lord’s anger burned against Uzzah because of his irreverent act; therefore God struck him down, and he died there beside the ark of God.

So they selected two chariots with their horses, and the king sent them after the Aramean army. He commanded the drivers, “Go and find out what has happened.”

This quiz is on wheeled conveyances: carts (20), wagons (3), and chariots (154).  The number in parenthesis is the number of times the word is used in the NIV.  Odd that an engineer writes over a hundred quizzes before he gets to one about a wheeled conveyance.

It is also odd that wagons, mentioned three times always are mentioned alongside chariots.  While history records the Chinese using war wagons about the time of Jesus’ ministry, armies from early on probably used the sturdier wagon to carry supplies.  Thus, an army on the move had foot soldiers marching, chariots, men on horseback (cavalry), and wagons to carry supplies and the wounded.

Notice how God had Moses provide carts for the transport of the Tabernacle, but when it came to the holy things, only the Kohathites were allowed to carry them and only over their shoulders.

Then when Uzzah reached out his hand to sturdy the ark of the Lord, he was struck dead.

It is good that we design energy saving devices, but we must pay attention to what God wants for His people.  People say today that moderation is key, but just one mistake in not showing proper respect to God is too much.

Question 3 above talks of the first instance of a tribe, or tribes, who did not do as God commanded.  They were afraid of the chariots fitted with iron.  They did not have enough faith to rid their land of these iron chariots.

Judah also failed, according to Judges 1, but in Judges 4, under the leadership of Deborah as Judge and Barak as the army commander, they defeated Sisera’s army with nine hundred chariots fitted with iron.  God’s power was always there.  The Israelites could have freed themselves from oppression after Joshua apportioned the land to each tribe.  They all had that power at their disposal.

In what ways do we think so little of God’s power that we miss out on God’s help?

Whether you did well on this quiz or, not so well, here is Ed Ames singing the theme song for the movie, The War Wagon.