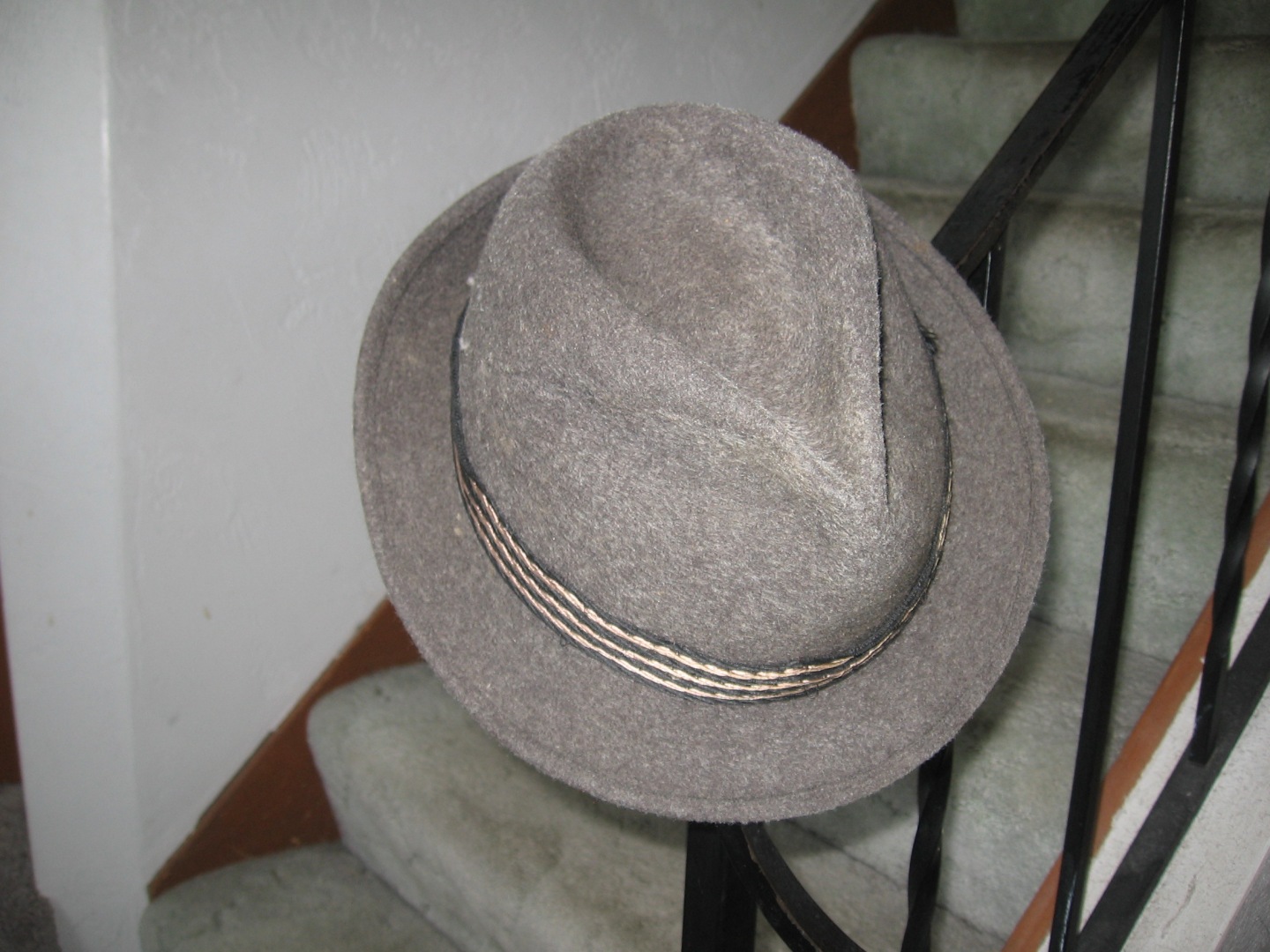 My first fedora, purchased in Heidelberg, made by Lembert, 100 Jahre Hutmacher

God, my shepherd!
I don’t need a thing.
You have bedded me down in lush meadows,
you find me quiet pools to drink from.
True to your word,
you let me catch my breath
and send me in the right direction.

Even when the way goes through
Death Valley,
I’m not afraid
when you walk at my side.
Your trusty shepherd’s crook
makes me feel secure.

You serve me a six-course dinner
right in front of my enemies.
You revive my drooping head;
my cup brims with blessing.

Your beauty and love chase after me
every day of my life.
I’m back home in the house of God
for the rest of my life.

“Another patient with strong religious feelings found it helpful to recite the words of the Twenty-third Psalm during the visualization exercise.  ‘He makes me lie down in green pastures.  He leads me beside still waters.  He restores my soul.’

“Why can this simple exercise reduce your anxiety?  It’s because you change the pictures in your mind, just as a movie director prepares for a totally different scene.  And the effect of the peaceful scene can be quite profound.”

I used the Message today in honor of the recently departed Eugene Peterson.

As for the quote from The Feeling Good Handbook, the kind doctor does not get it.  Reciting the 23rd Psalm works to lower anxiety, because God is real and He fulfills His promises to those who believe (not those who have ‘feelings’).  We believe the 23rd Psalms’ promise to us, and the anxiety will be less, maybe totally removed.  The quote comes from a section on ‘Positive Imaging’, a technique to reduce anxiety.

I took a reduced load my last semester of college.  I had taken an overload almost every semester for four years.  I wanted a break.  The assistant Dean of Engineering and the head of the chemical engineering department (whose name was on the building where we studied) approached me to retake Psychology 102.  I had to take two semester courses, 6 total hour credits, of something in that field and I had passed with a “D” – my only grade that low in about ten years.  I was number one in my class, even with the “D”.  The head of my department begged me to retake the course.  He did not want this mark on my transcript.  I had been a Rockstar, in his opinion, over my four years.  Please retake it.

Don’t get me wrong.  I have used as much Psychology in my work career as any other topic and more so than most topics.  Psy 101 was the basic foundations of Psychology.  I could really get into ‘cause and effort’ and ‘action / reaction’.  Those had Physics equivalents.  The professor gave me a “C” that semester, probably because I was an engineer.  I did better than “C” work – maybe low “A” or a solid “B”, but I was getting a real taste for the university’s arbitrary grading system.  I would have to be the star of the classroom to get a “B” due to being an outsider, taking a required elective and not otherwise interested in the course.

The following semester, Psy 102 was half abnormal psychology and half Dr. Spock child rearing.  With both semesters, the problem that I had was that biblical thinking and God given answers were totally off base, not allowed in discussion.  We had to be totally scientific, leaving spiritual out in the cold.  I could not do it.  In my view, I could never see bringing up my children without Christianity being at its center.  And as for abnormal psychology, some of the abnormalities of this world can be cured by God.

Take the quote above.  There is no ‘faith’ expressed in the good doctor’s analysis, only cause and effect.  Picture a tranquil scene; you get a tranquil outlook.  The anxiety fades away.  Again, don’t get me wrong.  If I ever have another MRI, I will be memorizing Scripture between the day of scheduling and the day of the test.  I need all the tranquility I can get.  I had never been claustrophobic until my first ‘open’ MRI.  CAT scans are a piece of cake, but not its magnetic cousin.

Why would I read a book on psychology, if I do not believe it?  I do believe in cause and effect.  I do believe in truth and in the Truth, and Dr. Burns points out some really important information in his first chapter of the handbook.  (I had already read Feeling Good, but somehow I cannot find a copy of Dr. Burns’ original book.)  This is a handbook, so there are a lot of tables.  The first is a correlation between your thoughts and your feelings.  Dr. Burns ties those together.  The next table is the powerful one, that everyone who watches the media today needs to understand – The Ten Forms of Twisted Thinking.

I don’t think that I am the only one that can see the parallels between News reports in these troubled times, on just about anything, and political back-biting versus these ten forms of Twisted Thinking.  We are not talking facts, but rather suppositions based on these ten forms of Twisted Thinking – thus our fears may be based on things that are not real – a different way of saying our only fear is fear itself.

I may not believe in the ‘absence-of-God’ form of psychology, but I can see the anarchists at our door step.  They wear suits and are armed with a microphone and a camera in their face.  Their network has an agenda, and they do not stay in front of the camera if they go off script.

Does watching the News give you anxiety and depression?

Then run your mind over this list of Twisted Thinking.  You may just find that the only truth in an hour’s News program is “Good evening.  This is Sunday, the 18th of November.”  (Unless you read this on any day other than the one in which it was posted.)

Trust in God and spend more time in studying the Bible and prayer than in watching the News.  You can be informed, but know the Truth.