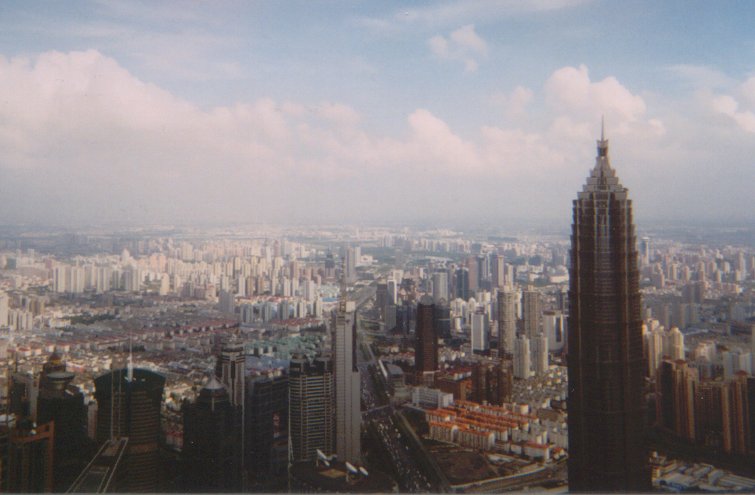 On my one trip up to the observation deck of the TV Tower in Shanghai, Peoples Republic of China, I got high enough to see above the underlying smog. You can faintly see clouds and a little blue sky, something that is never seen below in the city.

Blessed are those who are persecuted because of righteousness,
for theirs is the kingdom of heaven.

“Blessed are you when people insult you, persecute you and falsely say all kinds of evil against you because of me.  Rejoice and be glad, because great is your reward in heaven, for in the same way they persecuted the prophets who were before you.

“You have heard that it was said, ‘Love your neighbor and hate your enemy.’  But I tell you, love your enemies and pray for those who persecute you, that you may be children of your Father in heaven. He causes his sun to rise on the evil and the good, and sends rain on the righteous and the unrighteous.

We are hard pressed on every side, but not crushed; perplexed, but not in despair; persecuted, but not abandoned; struck down, but not destroyed.

“Now I will tell you the answer to my question. It is this. The Party seeks power entirely for its own sake. We are not interested in the good of others; we are interested solely in power, pure power. What pure power means you will understand presently. We are different from the oligarchies of the past in that we know what we are doing. All the others, even those who resembled ourselves, were cowards and hypocrites. The German Nazis and the Russian Communists came very close to us in their methods, but they never had the courage to recognize their own motives. They pretended, perhaps they even believed, that they had seized power unwillingly and for a limited time, and that just around the corner there lay a paradise where human beings would be free and equal. We are not like that. We know that no one ever seizes power with the intention of relinquishing it. Power is not a means; it is an end. One does not establish a dictatorship in order to safeguard a revolution; one makes the revolution in order to establish the dictatorship. The object of persecution is persecution. The object of torture is torture. The object of power is power. Now you begin to understand me.”

In reading a recent post from David Robertson, the Wee Flea, he said that we should double and triple check our sources, or words to that effect, like the people on the internet who have published the reports that COVID-19, the current coronavirus, was man-made to reduce the aged population in China.  The present coronavirus is most deadly among the elderly, especially those with breathing problems, but man-made for that purpose?  Having been to China a few times and having fought the Cold War in the Army in Germany versus a different Communist government, I can believe it possible, whether it is true or not is another subject.

What I thought instead as the reason for ‘making’ a virus to kill the elderly, it is taking the focus in China away from their persecution of the Christians in China.  Again, no proof, and unlikely, as the Chinese government has tried to downplay this entire thing.  We’ll never know how many have died in China from COVID-19.

Another quote from 1984 is “Big Brother is Watching You.”  The protests in Hong Kong are no longer in the news.  That could be a side effect of the coronavirus coverage also, but could it be that the protestors have been sent to reeducation camps or have gone into hiding?

If you wish to learn about the reeducation camps, you could read a couple of books from Zhang Xianliang.  I have read Half of Man is Woman and Getting Used to Dying.  Both deal with his imprisonment and his inward fight for freedom.  Or you could get a glimpse into such camps in Gao Xingjian’s books, One Man’s Bible and Soul Mountain.  These books are listed as ‘fiction’ and may be fictionalized autobiographical accounts.  Soul Mountain stems from Gao’s misdiagnosis of lung cancer and his half memoir, half fictional quest to find his soul – nothing to do with Christianity.  Soul Mountain earned him the Nobel Prize in literature in 2000.  These books have explicit depictions of sex, just so you know.  The Chinese have no Christian ethic as a basis for a moral code and do not understand the sensibilities of those who have such a moral code.

The title of this post is from a more commercial Chinese writer and poet, Qiu Xiaolong.  I have read his mystery novel, Death of a Red Heroine, that won the Anthony Award, an award to the best International mystery each year.  But his novel, Enigma of China, explores the concept that China is a Communist country, but is a blood thirsty Capitalist country at the same time, in the case of the fictional novel, leading to murder.  I have been to China five times, and I have worked on even more projects in China.  They are tenacious negotiators, with a great deal of patience.  They know that if they wait until you are about to miss a deadline, they’ll get both “A” and “B”, when you only get paid for “A” or “B”.

But let’s get back to 1984.  The book, not the year.  China broke their pact with Hong Kong and essentially invaded to quell the protests that China had already violated the pact, giving Hong Kong independent reign, though for a limited time.  The Chinese insisted that the protestors not wear masks.  Why?  Big Brother was watching and using facial recognition so that the protestors could be identified and sent to reeducation camps.  In mainland China, “Facial recognition cameras, pointed at the audience, are now required inside church auditoriums.  When Beijing’s largest house church, Zion Church, refused to install the cameras, the government closed the church” (from “A Church No Longer Afraid” in The Voice of the Martyrs magazine).  Why is facial recognition required?  So that if the government feels a need to do so, they can close down the church and send all the members to reeducation camps.  Sending church members to such camps is being done now, but not as often as arresting the pastor and his family.  One of the most well-known churches, Early Rain, was raided.  The pastor and his wife were arrested.  The wife was later released from prison, but remains in house arrest, unable to speak to anyone.

Even outside the church, China employs over 200 million facial recognition cameras, about one camera for every seven citizens.  If the government desired to arrest a church’s membership, there would be no place to hide.

And maybe above all other atrocities under attack in China, the government has decided that killing Christianity might be impossible, so they have endeavored to rewrite the Bible, allowing people to believe in Jesus and “love their neighbor,” but the only true salvation and power is found in the Chinese Communist Party.  The Chinese government truly believes what George Orwell wrote (the quote above).

When I travelled to China, I was instructed that I could take one Bible for my personal use.  Using the on-line Bibles might not work as China blocks most sites of that nature on their internet servers.  But, if I carried two Bibles, one would be confiscated at best, but most likely, I would not have been allowed into the country, labeled a subversive.  I wonder if you can even carry one Bible into the country now.

The great “Enigma of China” is not over capitalism in a communist country, it is over lost souls coming to Christ, knowing that in doing so, they place themselves in persecution.  But the answer to the enigma is found in our Savior.  Jesus is worth more than can be expressed, even certain persecution for righteousness sake.

Pray for us that we can fight to retain our dwindling freedom, and pray for those who worship God, in China and in other countries, where freedom has never been known, other than the freedom from sin that Jesus provides.