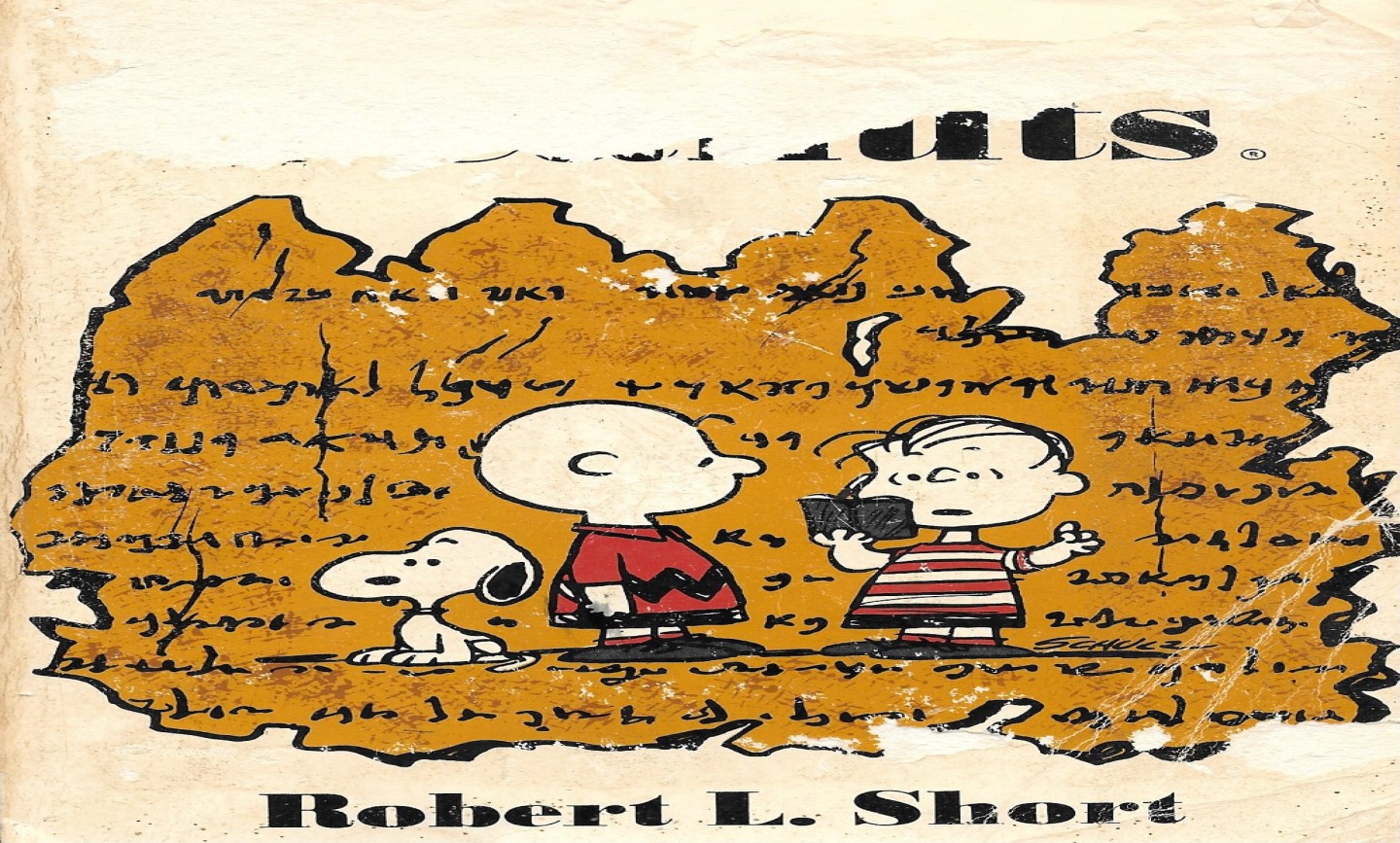 Although you cannot tell from the torn cover, this is the cover of my copy of The Parables of Peanuts by Robert L. Short.

“Call if you will, but who will answer you?
To which of the holy ones will you turn?
Resentment kills a fool,
and envy slays the simple.
I myself have seen a fool taking root,
but suddenly his house was cursed.
His children are far from safety,
crushed in court without a defender.
The hungry consume his harvest,
taking it even from among thorns,
and the thirsty pant after his wealth.
For hardship does not spring from the soil,
nor does trouble sprout from the ground.
Yet man is born to trouble
as surely as sparks fly upward.

“CHARLIE BROWN (on the pitcher’s mound): We’re getting slaughtered again, Schroeder.  I don’t know what to do.  Why do we have to suffer like this?
“SCHROEDER (in catcher gear): ‘Man is born to trouble as the sparks fly upward.’
“CHARLIE BROWN: What?
“LINUS (approaching the mound):  He’s quoting from the ‘book of Job,’ Charlie Brown, seventh verse, fifth chapter.  Actually, the problem of suffering is a very profound one, and…
“LUCY (approaching the mound): If a person has bad luck, it’s because he’s done something wrong.  That’s what I always say!
“SCHROEDER: That’s what Job’s friends told him, but I doubt if…
“LUCY: What about Job’s wife?  I don’t think she gets enough credit.
“SCHROEDER (speaking to Patty {not Peppermint Patty – the one with the bow in her hair} as eight members of the team are on the mound): I think a person who never suffers, never matures.  Suffering is actually very important.
“LUCY [shouting from behind Schroeder]: Who wants to suffer!  Don’t be ridiculous!
“PIG PEN (speaking to Charlie Brown): But pain is a part of life, and …
“LINUS (speaking to Shermie and Snoopy): A person who speaks only of the ‘patience’ of Job reveals that he knows very little of the book!  Now, the way I see it…
“CHARLIE BROWN (again alone on the mound): I don’t have a ball team.  I have a theological seminary!”

I would probably have rotten eggs and tomatoes thrown at this post if I asked if you thought you’d suffered enough already.  Or if you had learned anything about patience, other than having none left.

The Scripture above is part of the initial speech of Eliphaz, the Temanite, the response to Job’s initial lament in Job 3.  He is trying to tell Job, as Lucy told Charlie Brown that bad luck comes from bad behavior.  There must be sin that one is being punished for, otherwise there is nothing but good luck.

In a book by Philip Yancey, The Bible Jesus Read, he talks about the best way to read the book of Job.  You read the first two chapters carefully, then you skim through until God speaks at the beginning of chapter 38.  Maybe not exactly, but Yancey’s point was that while Job whines and his three friends, and later joined by a fourth, Elihu, delve into Job’s sinful life, the world’s view of ‘bad luck’ is exposited in the book.  So, in reading chapters 3-37 of the book of Job, we need to understand that this is not God’s view.  It is Job’s whining and a skewed worldly, yet legalistic concept of ‘bad luck.’

Yet, while Job is portrayed as blameless, we know that we are all sinners.  We do not deserve smooth sailing through life, and rarely does smooth sailing occur – for long.  Yet, if God has separated us from our sin as far as the east is from the west (Psalm 103:12), can we think of trials as being punishment?  If so, why are we questioning God’s ability to forgive?  Do we want to be punished?

I think Lucy answers that question.  No one wants to suffer, but some feel so guilty that ‘bad luck’ seems to be a form of comfort.  They live defeated.  I know.  I have been there at times.  When you do not devour God’s Word, you can easily get that way, especially when ‘bad luck’ comes into your life by the truckload.  And I have been there.

So, here we sit like birds in the wilderness.  Oh, you don’t know that old song?  Well when one group is late or an individual is late and everyone else is waiting, scouts used to sing:

The song is sung when someone spies the late person from a distance.

We don’t hear Job singing that song, but we can imagine him singing it.  Job was far from patient.  He wanted answers.  Then God impresses upon him that it was God that created the heavens and the earth, long before Job came along, so don’t get too huffy.

Yet, in our comic strip script above, Schroeder may be onto something.  Suffering – joyfully accepted – helps us to mature.

Wow!  If this stay-at-home thing lasts much longer, we might have a bunch of mature folks around here.

No, the neighbor teen-agers are stuck at home, but when a friend comes by, the window of the car is rolled down and the neighbor leans against the window for a private conversation.  We’ve proven how the ‘free world’ is totally inept at understanding the need for social distancing and totally inept at following the rules.  I was awarded great praise at the grocery store the last time out for being the first customer of the day that followed the rules, staying behind the piece of tape on the floor until the person ahead had left the checkout area.  Hey, it felt like going through any country’s immigration line.  The agents get huffy when you cross the line between you and the immigration agent until they are ready – as they sit behind the plastic wall (striking similarities to the grocery stores today).

Our lack of maturity (and this goes far beyond the teen-aged years) is what is making the suffering last longer.

As for me, I went grocery shopping eight days ago and I plan on going within the next few days, since I have three prescriptions to refill – one trip, double-masked, quick in and out, then a nice hot bath with plenty of soap when I get home.  I scrub my hands for 20 seconds after getting the mail, and I was only outside for a few seconds, only touching the mail and the front door.

No, Schroeder is right only if we have the willingness to learn from our suffering.  Job learned, but only after having a one-on-one discussion with God Himself.

We can talk to God too.  It’s called prayer.  Have you spent any of your ‘tons’ of ‘spare’ time in Bible reading and prayer?  God is waiting, patiently – and He knows how.  He’s had a few thousand years of practice at patiently waiting.

Oh, with the title that I chose, I need to say something about baseball…

Can you picture what would happen after this comic strip discussion on the mound?  You see Charlie Brown get the signal from Schroeder, he pitches the ball, you hear the crack of the bat hitting the ball, and then the ball goes screaming across the pitcher’s mound.  Charlie Brown screams “Agggh”, or something to that effect, as all his clothing flies off in different directions and Charlie Brown himself is doing a backflip to avoid being hit by the ball.

With that image in my mind, seen in countless Peanuts comic strips, I can almost smell the pine tar on the bat and the sweet smell of the glove’s leather.  This social distancing will be over.  Have patience.  If you want to have the patience of Job, have patience while whining.  You might get advice from friends about as helpful as that of Eliphaz in the Scripture above.