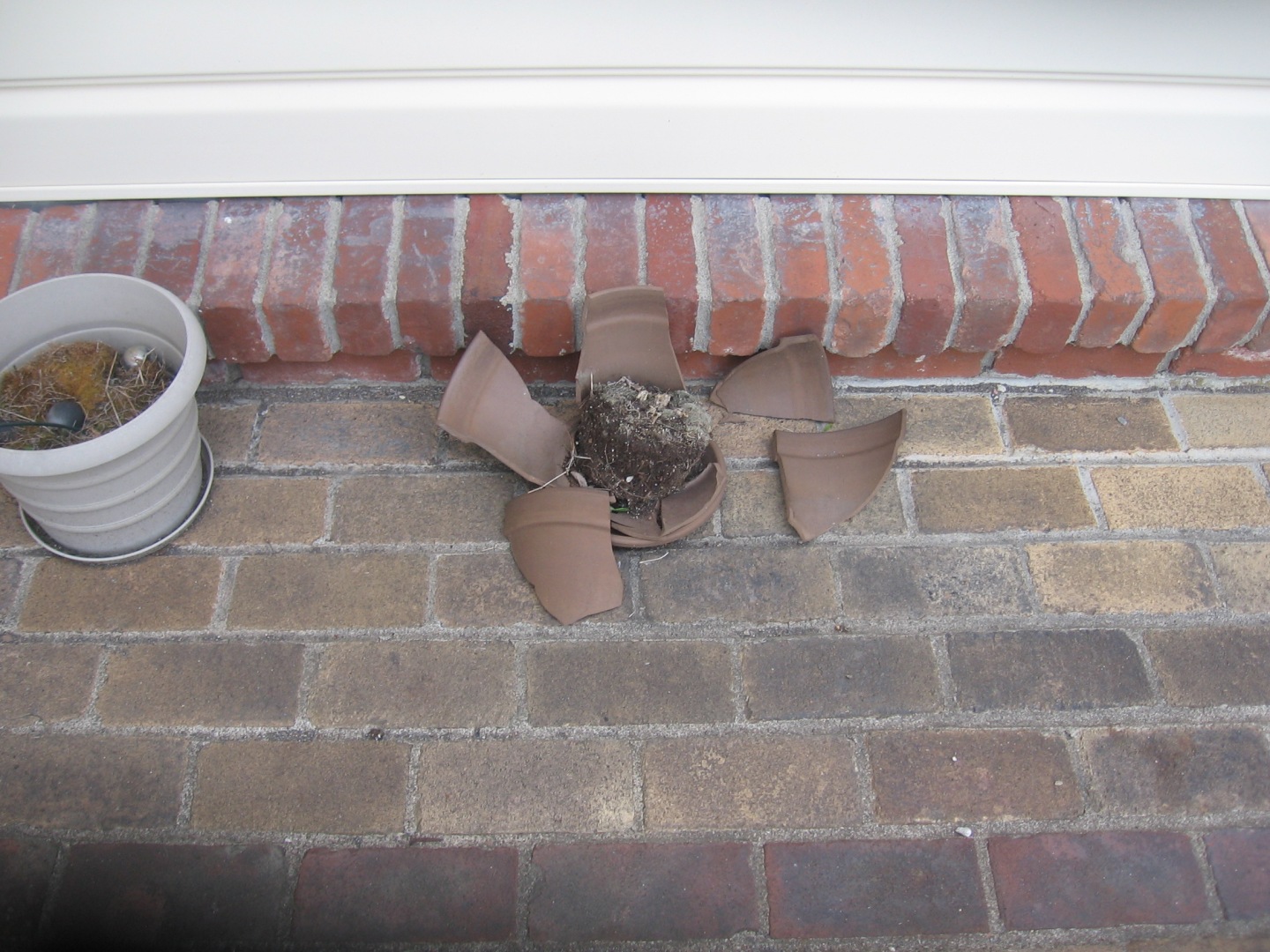 Proof that I had parked over a foot away from the wall. Broken clay pots is a common theme in the Bible.

They said to me, “Those who survived the exile and are back in the province are in great trouble and disgrace.  The wall of Jerusalem is broken down, and its gates have been burned with fire.”  …  By night I went out through the Valley Gate toward the Jackal Well and the Dung Gate, examining the walls of Jerusalem, which had been broken down, and its gates, which had been destroyed by fire.

But the ship struck a sandbar and ran aground.  The bow stuck fast and would not move, and the stern was broken to pieces by the pounding of the surf.

Obviously, since there is a quiz, the quiz maker is not “broken,” but it seems to be stuck on the word “broken” in the NIV.  For the most part, the answers to the questions will be what was broken?  One provides an alternate of what was NOT broken.

“Broken” appears in the NIV 133 times.  In a few cases, it may be only part of the word.  You can take that as a hint.  And while I am on the subject of hints, I usually avoid examples that are shown in the selected Scriptures, but in this case, I did not use the Scriptures shown above.  But what was broken?  …  Maybe.

Other than the last question, the questions are listed in Biblical order, not necessarily chronological order, since the experts place Job as the earliest written book, and if Luke’s chronology is correct, the two questions related to Jesus’ miracles should be flipped.

A note on the Bible References:  They provide the main answer, but more reading may be required for the bonus answers.

Regardless of what gets broken, God can make it right.

That is why I put the last question in there.  This attribute of our existence is something that God will deal with in a profound way.  It is only mentioned four times in the NIV, three of them being in the Psalms.  Why so few?  Why waste time on it when God has already provided the remedy?

Maybe not everyone has had that particular issue, but in Mark Lowry’s routine about seeing a television show on open-heart surgery, he asks the audience who has ever suffered from the condition.  Then he mutters something about those who did not raise their hand must not have reached puberty yet.  Now if that isn’t a hint, I do not know what a hint is!!!

And since you did so well, or even if you did not, here is a song from Tim Hawkins.  It is obviously when he was younger.  The song is My Arms are Broken, but if you know Tim Hawkins’s routines, he is also, kind of … broken, in a funny way.

Here is another Tim Hawkins song, The Buffet Man.  Just as crazy, but you might do as I did halfway through and sing along on the chorus.

After the last two songs, I felt that I had to reel in the humor a bit, but this one touched my heart as well, possibly the opposite in mood from the first two.  It describes just about any long-lasting marriage – Casting Crowns, Broken Together.

And this last song is from TobyMac, Love Broke Thru.  The video is appropriate for these troubled times.  If only this could be the result.  If we could only allow God’s Love to break through.

And I know some viewers who go through these quizzes enjoy this music.  But for an old stodgy traditional worship type guy like me, I am learning and enjoying the newer music too.  Who says an old dog cannot learn new songs?  Or is that tricks?  Regardless, God can fix anything that is broken, even me.  …  Even you.